Bank of America has come a long way since the financial crisis. Where is it headed over the next decade?

Bank of America (BAC -2.23%) has certainly made some improvements since the financial crisis. The bank is operating more efficiently, capital levels are at a safer level, and asset quality has improved tremendously. However, there is still some work to be done. Let's take a look at Bank of America's last decade, and where it could be headed in the next one.

Bank of America since the financial crisis

Before we take a look at where Bank of America might be headed, it's important to take a moment to appreciate just how far the bank has come in the years since the financial crisis.

For one thing, asset quality has improved dramatically. During the first quarter of 2010, in the wake of the crisis, Bank of America had to set aside $9.8 billion to cover credit losses and ended up charging off $10.8 billion during that one quarter. Today, both of those metrics are under $1 billion per quarter. Back then, more than 5.5% of the bank's loans were delinquent by 30 days or more and there was a total of $35.9 billion in non-performing loans on the books -- that's down to $8.8 billion today. 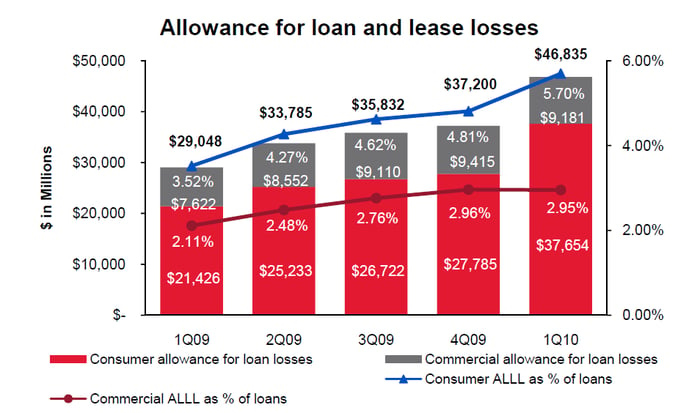 While improving the quality of its assets, the bank has simultaneously grown in smart, sustainable ways. For example, total deposits have grown by 24%, and investment and brokerage revenue has soared by 50%. This is how the bank has become more profitable in terms of earnings per share, despite the fact that its net interest margin has dropped by 25% (from 2.70% to 2.03%) in the current low-interest environment.

Finally, capital levels have improved significantly, meaning that the bank is in a far better position to weather the storm if another global recession were to hit.

The overall results of these improvements are a tangible book value that has grown by 43% over the past six years, and a bank that has boosted its dividend and has begun aggressively buying back shares. I think it's fair to say that this is a much different bank than it was in the years immediately following the crisis.

The reason is simple -- the bank isn't (yet) earning the kind of profits that investors expect, so shares trade at a discount. During the second quarter of 2016, Bank of America generated a 6.5% return on equity (ROE) and a 0.78% return on assets (ROA), while banks generally need to produce numbers of 10% and 1%, respectively, to cover their cost of capital and therefore create value for shareholders.

What could cause Bank of America stock to climb?

Simply put, profits will need to climb to an acceptable level. While the bank may keep improving its efficiency and grow its business, and produce some decent profit growth, what Bank of America really needs are higher interest rates.

The current environment of record-low interest rates has simply crushed the profit margins of the entire banking sector. We don't know exactly when the Federal Reserve will decide to raise interest rates, or how quickly, but the bank has said before that a 100-basis-point increase in interest rates would generate an additional $7.5 billion in net interest income for the bank. Considering that the bank produced $39.3 billion in net interest income for the entire year of 2015, this would be a pretty big boost in profits.

A 100-basis-point increase would correspond to a "target range" of 1.25% to 1.50%, which is still extremely low in a historical context. So, if interest rates return to more normal levels, it's safe to say that Bank of America could conceivably hit the ROE and ROA targets investors want to see. 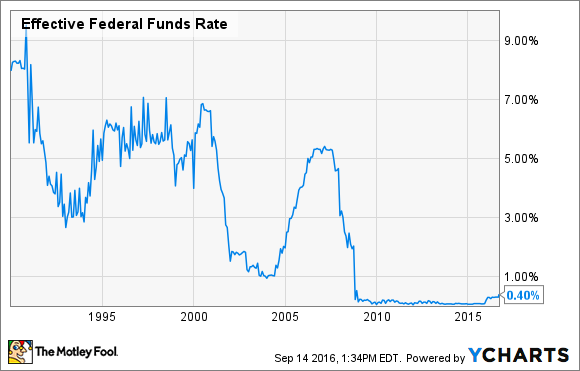 The performance of Bank of America's stock depends on many factors: some that are in the bank's control and some that aren't. However, over the next 10 years, there are a few things I'm pretty confident of:

In a nutshell, the performance of Bank of America's stock over the next 10 years is anyone's guess, but I believe there is more upside potential than downside risk. And I believe that, while it may take a few more years, Bank of America will eventually become a dividend powerhouse once again.

The bottom line is that this is a different bank than it was 10 years ago. As a shareholder, I'm encouraged by the progress it has made, and I'm excited to see the progress it will continue to make over the next decade and beyond.