Investors looking for growth opportunities often like what they find in the biotech sector. Unfortunately, biotech stocks frequently come with valuations that are either sky-high or highly speculative. The good news, though, is that there are some biotech stocks with solid financials and great pipelines that can be bought relatively inexpensively. I think Celgene (NASDAQ:CELG), Jazz Pharmaceuticals (NASDAQ:JAZZ), and Ligand Pharmaceuticals (NASDAQ:LGND) stand out in particular. Here's why.

Still revving up with Revlimid

Growth hasn't been a problem for Celgene, even though it's one of the biggest biotechs around. Revenue has soared 120% in the past five years. Earnings have continued to climb. Celgene's stock has more than doubled during the same period.

Much of Celgene's success came on the strength of its blood cancer drug, Revlimid. Celgene still depends heavily on Revlimid, with the drug generating over 62% of total revenue in the first half of 2016. And Revlimid's sales are still growing nicely, up nearly 18% year over year during the period.

However, Celgene is by no means a one-trick pony. Sales for multiple myeloma drug Pomalyst are growing rapidly, as well as for Otezla, which treats psoriasis and psoriatic arthritis. Celgene also receives significant revenue from cancer drug Abraxane and myelodysplastic syndrome (MDS) drug Vidaza.

Don't be scared off by Celgene's trailing-12-month earnings multiple of nearly 47. I think the stock is actually valued quite attractively when its growth potential is factored into the equation. Celgene projects annual EPS growth of roughly 23% through 2020. The biotech's rich pipeline should allow it to deliver on that goal, or at least come pretty close. With earnings growth of 20% or more definitely attainable, Celgene's current share price makes this stock a good deal.

Up until the middle of last year, Jazz Pharmaceuticals shareholders were letting the good times roll. However, the biotech slump that began in the second half of 2015 hit Jazz's stock hard. This year has been something of a roller coaster ride for the biotech's share price. 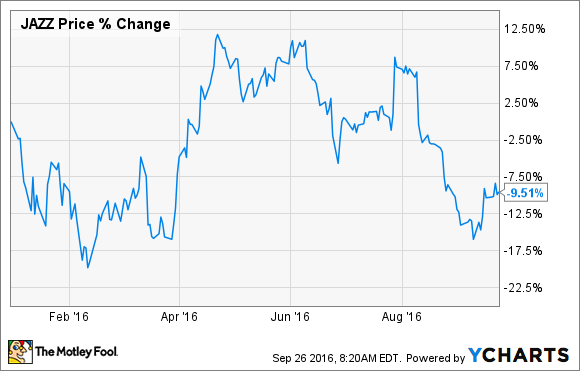 Jazz Pharmaceuticals has several positive things going for it, though. Most important, its flagship product, Xyrem, grew sales by a double-digit percentage last quarter compared to the prior-year period. The narcolepsy drug kicked in nearly three-quarters of Jazz's total revenue in the first half of 2016.

Wall Street expects annual earnings growth of more than 25% for Jazz over the next five years. I think the combination of Xyrem, Defitelio, and Vyxeos, along with late-stage pipeline candidate JZP-110, should enable the biotech to meet those expectations. Near-term growth projections for Jazz give the stock a forward earnings multiple of just under 11, making the biotech an attractive buy.

I think that Ligand Pharmaceuticals has one of the most intriguing business models of any biotech around. The company licenses its drug development platforms to other drugmakers. At last count, Ligand had almost 70 partners using one of its technology platforms (including Celgene, by the way).

The most prevalent Ligand technology used by partners is Captisol. Drugmakers like Captisol because it improves solubility, stability, bioavailability (how much a drug enters the blood stream and can be effective), and dosing of active pharmaceutical ingredients. Captisol might not get a lot of press, but it's an important component of successful drugs including Promacta and Kyprolis.

Is Ligand a bargain? Yes, even though its share price has octupled (I don't get to use that word very often) over the past five years. Ligand enjoys a relatively low trailing-12-month earnings multiple of 11. That multiple is artificially low, however, thanks to a huge one-time tax benefit in the third quarter of 2015.

Ligand does have an attractive valuation, though, because of its growth prospects. The consensus among analysts is that the company will increase earnings at an average rate of 45% annually over the next five years. The reason behind that astounding growth estimate stems from the sheer number of drugs in various companies' pipelines that use Captisol or one of Ligand's other technologies. As of August 2016, more than 150 fully funded programs have been partnered or licensed with other drugmakers. As a result, Ligand has many paths to growth.