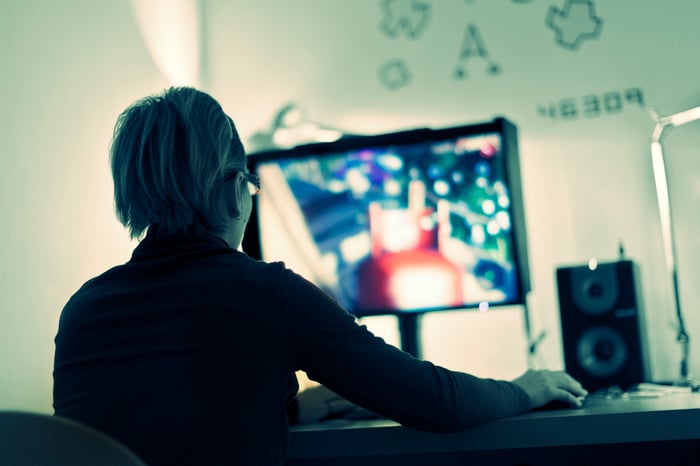 According to website hwbattle.com, graphics specialist NVIDIA (NASDAQ:NVDA) is preparing two new graphics processors aimed at gaming-oriented desktop computers. Both processors will be based on a chip that NVIDIA internally codenames GP107.

The first product, according to the leak, is known as the GeForce GTX 1050 Ti. This is said to be based on a fully enabled version of the aforementioned GP107 chip. Add-in-boards sold with the full GTX 1050 Ti graphics processor are expected to include four gigabytes of GDDR5 video memory, and will be sold at a manufacturer's suggested retail price, or MSRP, of $149.

The second product, known simply as the GeForce GTX 1050, is expected to feature a partially disabled GP107 chip, and just two gigabytes of video memory. It's expected to retail starting at $119.

Right now, NVIDIA's offerings in the mid-range of the desktop add-in graphics board market (GeForce GTX 1060-series) are leadership products, and its offerings at the high end of the market (GeForce GTX 1070/GTX 1080 and Titan X) are currently unrivaled. At the $119-$149 price points, the company's prior-generation offerings, based on its Maxwell architecture, are actually still performance/power competitive -- at least according to tests performed by TechPowerUp. However, the company's products don't command clear performance/power efficiency positions as in its mid-range and high-end products.

By transitioning from the older Maxwell architecture to the newer Pascal architecture in this segment, NVIDIA potentially stands to catalyze upgrades among users of its entry-level Maxwell and older-generation graphics processors. Indeed, according to the Steam Hardware Survey, a very significant portion of NVIDIA users within Steam user base (Steam users comprise a large portion, if not the majority, of PC gamers) are using GeForce GTX 950-class hardware or older:

Should the new GTX 1050/GTX 1050 Ti graphics processors offer a significant performance/power improvement over these prior generation NVIDIA x50-class parts, then their launch could spur a solid replacement cycle over the next 12 months or so.

NVIDIA has done a good job of releasing new graphics processors at a regular clip, beginning in May. The company clearly prioritized its higher end/higher performance parts first as that's where a lot of the revenue/gross margin dollars are.

However, it's clear that the company wasn't planning to neglect the more value-oriented portion of the stand-alone graphics card market. The GeForce GTX 1050/GTX 1050 Ti look as though they should capably serve this segment.

Another thing to keep in mind is that NVIDIA is likely to offer the GTX 1050/GTX 1050 Ti into the notebook market, as well. These chips should be quite power efficient, and should enable some very sleek, thin-and-light gaming-capable systems to hit the market.

Considering how much NVIDIA has talked up the growth opportunity ahead of it in gaming-capable notebooks, the GTX 1050/GTX 1050 Ti may be more exciting for those markets than they will be to desktop PC gamers.