It's been a pretty good year so far for companies with significant exposure to heating, ventilation, and air conditioning (HVAC) markets. Ingersoll-Rand Plc (NYSE:TT) has risen 20%, pure play Lennox International, Inc (NYSE:LII) is up nearly 26%, and Johnson Controls (NYSE:JCI) (which also has substantive automotive operations, and is busy integrating Tyco International this year) is up 35%.

With the smallest stock price increase of the three, is Ingersoll-Rand still a good value for investors? 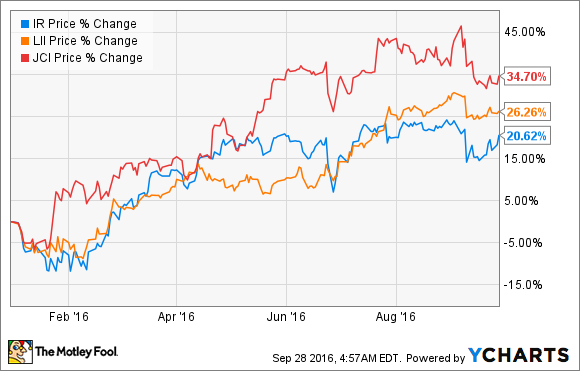 At the start of fiscal year 2016, management predicted continuing adjusted EPS of $3.80 to $4. Fast-forward to the second-quarter results in July, and guidance increased to $4-$4.10, while the stock is up more than 20% year to date. In addition, adjusted free cash flow guidance increased to a range of $1 billion-$1.1 billion from $950 million-$1 billion previously.

It's good news, but it's really a tale of two segments moving in opposite directions. To explain, let's first look at how the company makes money. As you can see below, Ingersoll-Rand generates 77% of its revenue from its climate segment, with the rest bundled together in its industrial segment. Two-thirds of total revenue came from North America in 2015, and 68% of revenue was from new equipment. That's important, as it means the company's revenue tends to fluctuate significantly with end demand.

Simply put, Ingersoll-Rand's climate segment has outperformed the expectations set at the start of the fiscal year, while the industrial segment has fallen short. Here's a quick look at how organic revenue growth has diverged in the two segments. 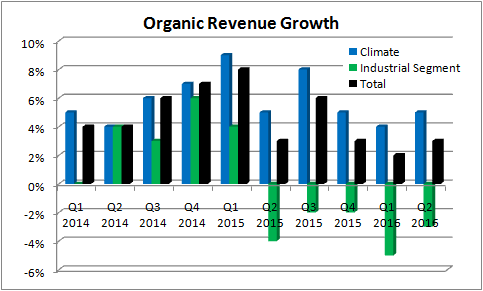 It's a similar story with Johnson Controls' building efficiency (primarily HVAC) segment. Organic sales increased 4% in its most recent third quarter, with North America up 3%. Meanwhile, Lennox International expects North American residential HVAC shipments to increase by the mid single digits in 2016, with commercial shipments forecast to increase in the low single digits. 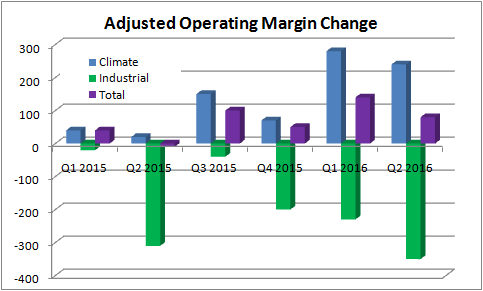 According to CFO Susan Carter on the most recent earnings call, utility vehicles make up around 20% of industrial sales, with aftermarket sales overall in the segment contributing 30%. This means around 50% of industrial sales go to new equipment in the industrial process industry, including compression technologies used in the energy industry. No prizes for guessing that sales have been hard-hit this year as energy companies continue to cut capital spending.

There are three key reasons Ingersoll-Rand stock might increase in value in the future:

The third point is best expressed by comparing the company, which gets around 80% of its revenue from climate technologies, with Lennox International, a pure-play HVAC stock. As you can see below, Ingersoll-Rand trades at a substantial discount. 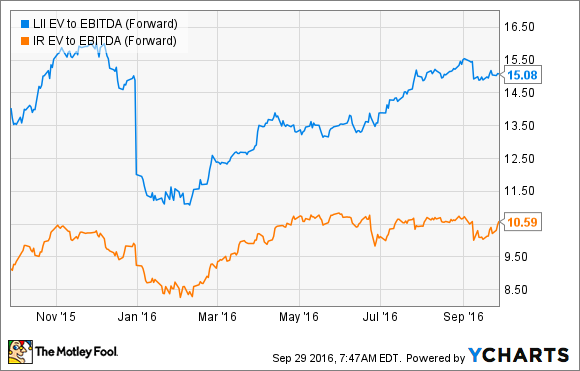 On an absolute basis, Ingersoll-Rand looks a little cheap, but it's hardly a screaming buy. A forward P/E ratio of 16.5 times earnings isn't anything to write home about, even if the stock trades on a forward free cash flow-to-enterprise value (market cap plus net debt) yield of 5.2%.

All told, Ingersoll-Rand still looks like a good value, but not by much. The stock needs to deliver on its margin expansion plans in the climate segment and see some better industrial conditions in order to move significantly higher from here.