Many investors believe that stock splits are one of the clearest signs of a successful investment. Even though the act of splitting a stock has no direct impact on its total value, investors have historically seen stock splits as a bullish sign of future optimism. For a long time, most companies focused on doing 2-for-1 stock splits. But more recently, a few different companies have made more aggressive split moves, and the 7-for-1 split has come into vogue as an ultimate mark of success for a company. Let's take a closer look at the 7-for-1 split to try to figure out how it became the most high-profile type of stock split in the market and which other companies could follow suit soon. 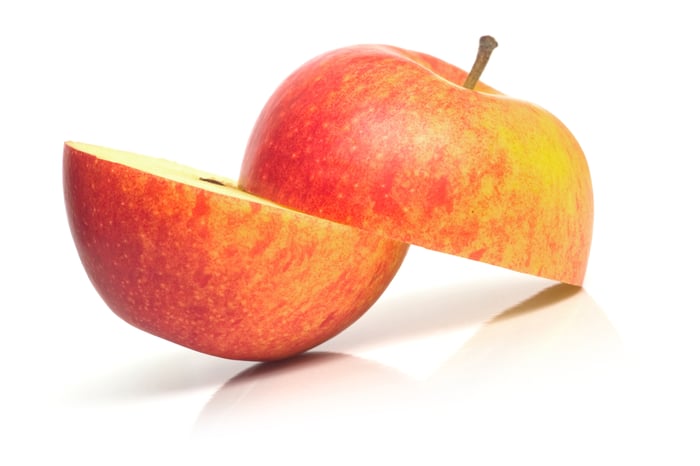 What a stock split does

The mechanics of a stock split are simple to understand. When a company does a split, it increases its number of shares outstanding. At the same time, the value of each individual share falls in order to keep the company's overall value constant. For instance, say a company has a market capitalization of $2 billion, with 100 million shares outstanding and trading at $20 per share. If the company does a 2-for-1 stock split, it doubles the number of shares outstanding to 200 million. It also splits the value in half, making each share worth $10. All other things being equal, the company has the same market capitalization before and after the split.

In the past, many companies did stock splits to keep their share prices below the $100 mark. Triple-digit stock prices were seen as expensive, and back when most trading on Wall Street involved 100-share blocks of stock, a $100 price tag meant that investors would have to pay $10,000 or more just to initiate a minimal position. Therefore, splits often happened to pull share prices firmly back down into the double digits, making it easier for investors to buy and sell shares as well as signaling the belief that further share-price gains would come in the future.

How the 7-for-1 split became popular

The rise of online brokers made trading in 100-share blocks less of a requirement, and so-called odd-lot trading became more prevalent. As a result, many companies stopped paying so much attention to their share prices, figuring that investors could simply buy smaller amounts of a higher-priced stock. The net result was that many popular stocks saw their share values soar into the triple-digits, and now, some companies have share prices of $1,000 or more.

Nevertheless, splits did still happen for various reasons, and the company that started the 7-for-1 trend was market giant Apple (NASDAQ:AAPL). By 2014, the tech giant had seen its stock climb to more than $700 per share, and CEO Tim Cook said that the price had climbed so far that the company wanted to make shares more accessible to a wider set of potential shareholders. That was an interesting change of opinion for the CEO, who had previously said at shareholder meetings that splits accomplished nothing for shareholders and therefore weren't necessary. Some market commentators noted that the fact that because Apple split its shares, its stock price came into a range that made it an acceptable choice for inclusion within the Dow Jones Industrial Average (DJINDICES:^DJI), which is price-weighted and therefore relies on share prices being proportional to a stock's influence over the entire average.

After Apple opened the floodgates, other companies started to look at 7-for-1 splits. One of the highest-profile follow-on splits came from Netflix (NASDAQ:NFLX), as the video-streaming service did a 7-for-1 split in 2015. One noteworthy aspect of the 7-for-1 split in this case was that by making per-share financial performance less granular, splits can obscure rises or falls in key business measures that would have been easier to spot before a split. Moreover, a 7-for-1 split does an even more effective job than 2-for-1 splits in accomplishing that goal, if it exists.

There are several candidates for potential 7-for-1 splits in the near future if the companies involved want to take action. Both Alphabet (NASDAQ:GOOG) and Amazon.com (NASDAQ:AMZN) have share prices exceeding $900, and a 7-for-1 split would allow them to keep their triple-digit stock prices while giving split-hungry investors what they want. Yet neither company has made a habit of doing regular stock splits, with Alphabet having done its split between A and C shares more as a corporate governance move than out of any desire to offer shareholders a bump in enthusiasm.

Still, the same reasons behind the Apple move could apply to Amazon or Alphabet. If either company wants the allure of being a Dow component, it will have to do something to bring their share prices into line.

From a fundamental perspective, 7-for-1 splits don't have any true impact on a company -- it's just slicing the same pie differently.