It's been a couple of quarters since I looked closely at Facebook's (NASDAQ:FB) financials and monetization metrics. I checked in with the social network's figures today, and frankly I was blown away at the progress that it has made in terms of user monetization, particularly within its home turf of the U.S. and Canada. There's no other way to put this: Facebook is crushing it.

When did that happen?

Ad average revenue per user (ARPU) has skyrocketed in recent quarters and now stands at $13.74 within the U.S. and Canada. There was a notable jump in Q4 2015, when ad ARPU popped above $10 for the first time in North America. This progress is particularly impressive if you zoom out and look back at Facebook's early history of ad monetization. Back in 2010, North American ad ARPU ranged from $1.73 to $2.41. There was continued growth in 2013 and 2014 when North American ad ARPU hit $5 and above. 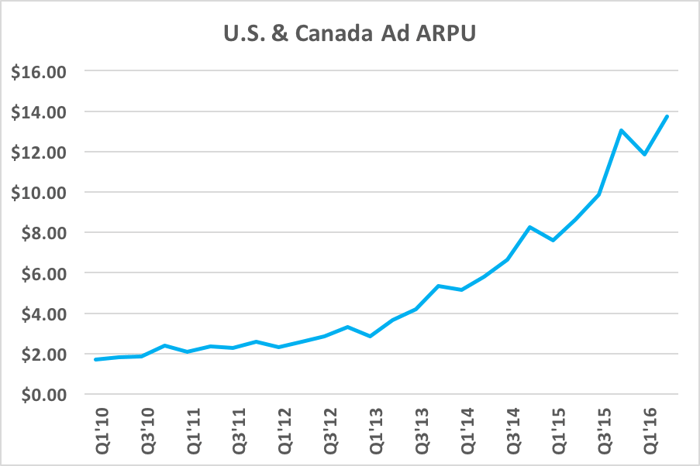 But now we're seeing insane monetization levels as Facebook continues to expand its portfolio of apps and services while it simultaneously grows its user base. The massive user base turns around and attracts advertising customers, of which Facebook now has 4 million. That's double the 2 million advertising customers that Facebook had as recently as February 2015. This growth in customers is mostly coming from small businesses looking to engage mobile users, according to COO Sheryl Sandberg.

"Free and always will be"

Facebook's main site has long touted that the service is "free and always will be." Yet, that doesn't stop the occasional speculation from circulating that Facebook is preparing to implement a monthly fee for users. Just this summer, a hoax went viral that Facebook was about to start charging a fee, yet users could somehow avoid this fee if they simply copied, pasted, and posted a specific status update on Facebook. There was another one in January.

Looking at these ARPU figures shows that this truly isn't necessary. Whenever the speculation arises, the fee usually amounts to anywhere from $1 to $5 per month. Most people probably wouldn't worry about $1 per month, but could balk at the prospect of $5 per month to see what their friends are eating for lunch. Yet, we now see that Facebook is already making nearly as much as the high end of that speculative range. If you include the modest amount of revenue that Facebook generates from payments and other services, North American total ARPU last quarter was $14.34, which translates into $4.78 per month.

Zuck still has plenty of work to do

All of this impressive progress is only applicable to North America. Facebook's progress in most other regions is but a fraction of its North American monetization levels. Asia ARPU was just $1.77 last quarter, or less than North America six years ago. The "rest of world" ARPU came in at a mere $1.13.

Facebook has 226 million monthly active users (MAUs) in North America, or just 13% of the global 1.7 billion MAUs. With the vast majority of the user base being outside of the U.S., Facebook still has a long way to go to improve the monetization levels that are relevant for the rest of its user base.