Fiat Chrysler Automobiles (NYSE:FCAU) said on Oct. 25 that its adjusted earnings before interest and tax ("adjusted EBIT") jumped 29% in the third quarter to 1.5 billion euros ($1.63 billion).

Continued strong demand for its profitable Jeep SUV line led FCA to boost its full-year 2016 guidance for the second time this year. But its third-quarter net result was dented by a charge of 149 million euros ($162 million) for recall-related costs.

The result exceeded the 1.4 billion-euro average estimate by Wall Street analysts polled by Reuters. Revenue was roughly flat at $26.8 billion euros, below the consensus 27.5 billion-euro estimate.

All financial results are in billions of euros except as noted.

FCA's expressions of "adjusted EBIT" and "adjusted net profit" exclude one-time items, such as this quarter's recall-related charge, from the standard calculations.

FCA's calculation of "net industrial debt" is its total debt minus cash on hand and debt related to its financial-services arm. Its total debt was 25.3 billion euros as of Sept. 30, 2016.

How FCA's business units fared during the quarter

All profit and loss figures and margin calculations in this section are on an "adjusted EBIT" basis.

FCA's NAFTA unit earned 1.28 billion euros, up from 1.19 billion euros a year ago. Its margin rose to 7.6% from 6.7% a year ago. U.S. sales were up just 1% in the quarter, but sales of the highly profitable Jeep and Ram lines were up 5% and 11%, respectively.  Strong net pricing and cost gains drove the profit increase.

FCA's LATAM (Latin America) unit lost 16 million euros during the third quarter, down from a 28 million euro profit a year ago. Its market share in the region fell to 12.9% from 14.3% a year ago. While product mix and pricing helped the bottom line somewhat versus a year ago, the gains were overwhelmed by losses related to inflation and exchange-rate effects.

FCA's APAC (Asia Pacific, Australia, China) unit earned 21 million euros, up from an 83 million euro loss a year ago. Its sales in China rose 52% from a year ago, far outpacing the overall market's gains. As is so often the case with FCA, Jeep was the key: FCA is now building Jeeps locally in China, where SUVs are in very strong demand.

FCA's EMEA (Europe, Middle East, Africa) unit earned 104 million euros, up sharply from a profit of just 20 million euros a year ago. Sales growth drove the gain: FCA's passenger-car sales in the European Union rose 11% from a year ago, and sales of its commercial vehicles rose 17%. Both gains outpaced the overall industry's growth.

Early demand for the new Maserati Levante SUV has been very strong, helping the brand to a jump in third-quarter profits. Image source: Fiat Chrysler Automobiles.

FCA's Maserati subsidiary reports its results separately from the regional units. Maserati's profit rose to 103 million euros from just 12 million euros in the year-ago quarter, on a 54% jump in global shipments to 10,656. The brand's margin was a healthy 11.3%. Sales for luxury sedans have been sagging across the industry, and Maserati's Ghibli was no exception -- but the brand recently launched its first-ever SUV, the Levante. Demand has been brisk in all regions, with over 18,000 orders placed as of the end of the quarter.

FCA's Components unit includes auto-industry suppliers Magneti Marelli, Comau, and Teksid. The group earned 112 million euros, up from 98 million a year ago, with a 4.7% margin.

As of Sept. 30, FCA had "net industrial debt" of 6.5 billion euros, up from 5.5 billion euros as of June 30. It attributed the increase to "normal working capital seasonality." Its total debt of 25.3 billion euros was roughly flat from three months prior.

A boost in guidance as strong SUV demand continues

As noted above, FCA once again increased its guidance for the full year, as shown in this slide from its earnings presentation. 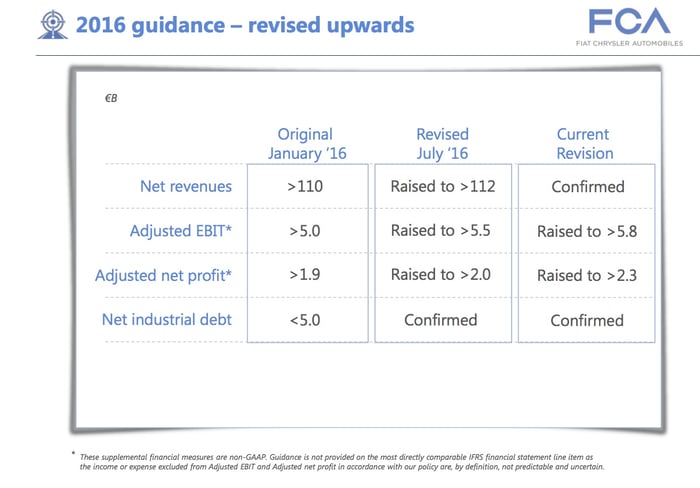 Note that FCA still expects its net industrial debt to fall below 5 billion euros by the end of the fourth quarter.