Why should an investor consider buying ACADIA Pharmaceuticals (NASDAQ:ACAD) stock? Not because the biotech's Nuplazid stormed out of the gate after winning FDA approval in April. It didn't. There are reasons to buy ACADIA, though. These three charts show why the biotech stock could become a winner over time. The number of Parkinson's disease psychosis patients is expected to increase as baby boomers in the U.S. age. ACADIA set its price for Nuplazid at $23,500 per year. That translates to a market potential of over $9 billion with the current number of patients diagnosed with PD psychosis. By the end of the next decade, though, the market size could be close to $17 billion.

More indications potentially on the way

Allergan (NYSE:AGN) currently stands atop the market for Alzheimer's disease psychosis. While the company's Namenda lost patent protection last year, Allergan launched a follow-up product called Namenda XR. The two versions of the drug combined to pull in over $1.3 billion in 2015. If Acadia ultimately wins regulatory approval for the Alzheimer's disease psychosis indication, Nuplazid could emerge as an even bigger winner than Namenda.

Speaking of Allergan, the company could be one of a handful of bigger players interested in scooping up ACADIA at some point in the future. ACADIA's declining market cap makes the small biotech a better bargain than it has been previously. 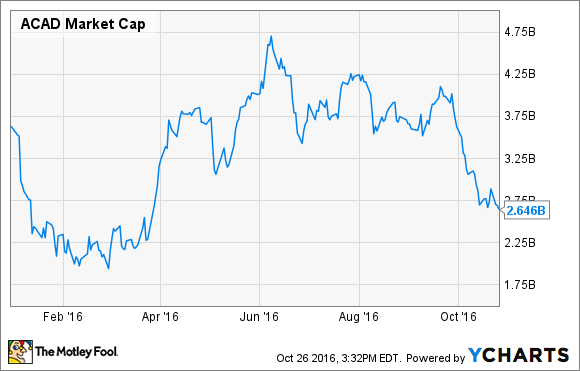 ACADIA's shares have been hurt this year largely due to skepticism that the company can be successful commercializing Nuplazid on its own. While ACADIA now has a sales force of around 135 specialists promoting the drug to physicians, this is the biotech's first product. Bringing a partner on board -- or selling the company -- could unlock additional value through access to a larger sales team with proven expertise in the neurological market.

Allergan is no stranger to making deals. Nuplazid should be a good fit alongside Namenda. However, Allergan doesn't have the cash to pull off an acquisition of ACADIA and already carries a huge debt load. Those factors could prevent the company from moving forward even if it was interested in a buyout. Of course, ACADIA could attract interest from other larger drugmakers.

ACADIA announces its third-quarter results soon. Those results should reveal if Nuplazid has picked up momentum. The biotech also should release data within the next month or two from the midstage study of Nuplazid in treating Alzheimer's disease psychosis. Good news on either of these fronts should help ACADIA's stock to rebound.