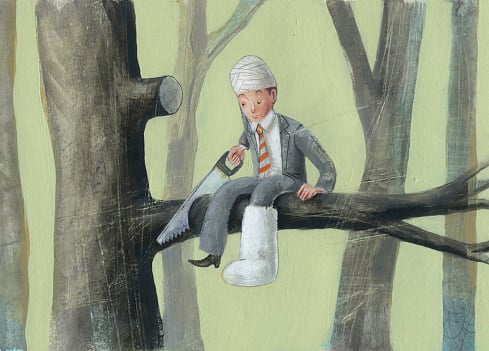 If you're looking for a biotech with a habit of beating expectations, you may be considering Amgen (NASDAQ:AMGN). The company has posted positive beats for the past year, including a 7.9% earnings beat in Q3.

But push the pause button, because Amgen isn't as good as it looks. The biotech has a concentrated revenue position in only a few products, and it's growing revenue and earnings by increasing prices on these drugs in the face of dwindling sales. Worse still, the company recently had a major pipeline failure to the tune of $10 billion.

Let's take a closer look at the huge flop first and then see how things could shape up for this stock long-term.

Two years ago, Amgen's management shelled out $10.4 billion for Onyx Pharmaceuticals to acquire a drug called Kyprolis. Ambitions for this drug ran sky high. In fact, in July, Amgen CEO Robert Bradway said, "We expect [Kyprolis] to be a backbone of multiple myeloma therapy for the forseeable future."

Fast-forward to today, and Amgen's management has $10.4 billion worth of egg on its face: Kyprolis has been a major disappointment. Amgen badly needed proof it was a superior drug and gain approval in a first-line setting in order to justify a $10 billion price tag. Instead, data released in the recent phase 3 Clarion trial showed that the drug was no better than Takeda and Johnson & Johnson's (NYSE:JNJ) Velcade. Trial data showed Kyprolis achieving median progression-free survival of 22.3 months, i.e. next to no difference from the 22.1 months for the Velcade cohort. That's terrible news for Amgen, since doctors will almost definitely prefer the cheap Velcade generics that will be available after Velcade's patent expires next year.

Kyprolis is currently being used as a second-line therapy, meaning after the first-line therapy has failed, but even in that setting Amgen faces growing competition. Since the Onyx acquisition, new drugs have flooded the multiple myeloma market, including Johnson & Johnson's superstar Darzalex and Bristol-Myers Squibb and AbbVie's Empliciti. And then there's recently released Pomalyst from Celgene. Unfortunately for Amgen, Kyprolis and Pomalyst use very similar mechanisms of action, but Celgene's drug has the big advantage of being a pill, while Kyprolis requires a bi-weekly office visit for an infusion.

Kyprolis' sales ticked downward last quarter. Sales may vacillate when Amgen reports on Oct. 27, but the real issue is this: Kyprolis, which some analysts saw reaching $3 billion in annual salesat its peak, is going to bring in a small fraction of that figure at best -- which is in no way the multiple myeloma "backbone" Amgen had hoped for.

Sprinkling rain on the PCSK9 parade

The second hoped-for star in Amgen's pipeline is next-generation cholesterol-lowering injection Repatha. Analysts forecast that the PCSK9 inhibitor could reach the range of $2 billion to $4 billion in annual sales. I'd dial that down to the lower number, since Repatha has rival drug Praluent from Sanofi and Regeneron to contend with.

In fact, Repatha might not even reach $2 billion. The drug, which is priced at an eye-popping $14,100 annually, is having the least inspiring launch of a major drug I can remember. Last quarter, it brought in a meager $27 million. Bottom line: The PCSK9 drugs must secure adequate payer access to keep from disappointing investors, and it will be interesting to see how that plays out -- but I'm not confident in it.

What about some analysts' belief that Repatha and the other PCSK9 drugs could end up being approved to replace statins for managing cholesterol in the general population? The FDA is going to demand a mountain of data on efficacy and safety before that happens, and in the end, it might not matter. According to a Journal of the America Medical Association report, averting a cardiovascular death by one year with the new PCSK9 inhibitors would cost the healthcare system far too much to make their use feasible in a broad application -- an estimated $500,000 per life year extended.

More than 71 million U.S. adults, or nearly one-third of the adult population, have high LDL cholesterol -- the bad kind -- according to the CDC. The prospect of having such an expensive injectable drug replacing generic statins, which cost 90% less, simply doesn't pass a sanity test. The bill for the healthcare system -- assuming we reduce the use to those who have not just high cholesterol, but also a history of coronary disease -- would be $100 billion to $200 billion annually.

Perhaps I'm being a tad harsh on Amgen, but the company is a classic example of a biopharma that's leaning on constant price increases for growth. For example, Amgen's top seller, rheumatoid arthritis drug Enbrel, cost $10,000 per year when it came on the market in 1998. Today, it rings the register at $4,000 per month, or $48,000 per year, a price so steep Enbrel isn't covered by many Medicare and insurance plans.

Raising prices on old drugs to make up for their declining sales volume has been a common practice among drugmakers for decades, but political and payer pressure is affecting the whole sector and puts Amgen at high risk.

Why Amgen in particular? Amgen generates over 50% of its revenue from two aging biologics, Neulasta and Enbrel. The days when these drugs were expected to grab an ever-increasing slice of the pie are over. Both saw declining sales volume last quarter, but lower unit sales were "managed" by raising their selling prices.

In fact, Enbrel, whose revenue apparently spiked 10% to $1.48 billion last quarter, saw its volume, or number of prescriptions written, shrink 2%. That would have been reflected in the revenue, if Amgen hadn't moved Enbrel's price up to make up for lagging sales.

Editor's Note: This article has been updated with new information. It had previously stated that Repatha is not covered by Express Scripts -- when it, in fact, is. The Fool regrets the error.