Investors in Molina Healthcare (NYSE:MOH), Centene (NYSE:CNC), and WellCare Health Plans (NYSE:WCG) are having a rough day. Shares of all three companies are falling by double digits in early afternoon trading in response to the news that Donald Trump has won the 2016 presidential election.

What do these three companies have in common? They all provide government-sponsored health insurance. As you'd expect, they have greatly benefited from the passage of the Affordable Care Act, which is better known as Obamacare.

Here's a look at the revenue growth that each of these companies has put up since the bill became the law of the land in 2010. 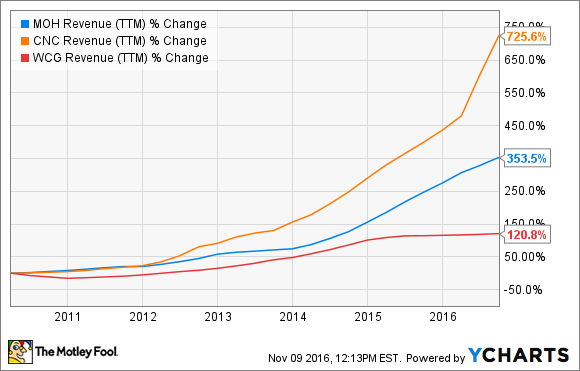 Since Trump has repeatedly promised to repeal and replace the Affordable Care Act once he reaches the Oval Office, the program's future is very much up in the air. That's especially true now that Republicans will control the White House and both houses of Congress.

For these reasons, Tuesday's election results threaten to derail the growth prospects of all three of these companies, which is why shares are tanking today.

While it is still too early to draw any real conclusions on the future of Obamacare, we do know that one of the hallmarks of Trump's healthcare plan is to allow companies to sell insurance across state lines. We won't know if this rule change will ever get passed, but if it does, then each of these companies could face increased competition in the future.

Another question mark that remains unanswered is how the big insurers will react to any potential changes to the program. After all, we saw companies like UnitedHealth Group and Anthem jump at the chance to offer individual exchange-compliant products when the Affordable Care Act was introduced, but more recently they have been abandoning these insurance plans because of higher-than-expected losses. The problem? Patients who are signing up for the exchanges' plans ended up relying on them far more than expected, which pressured profits. It is possible that with a few rule changes providers would be willing to jump back in.

Of course, the assumption that these companies will automatically be unable to compete if changes are made to our healthcare laws is likely incorrect. After all, Centene's membership was over 11.4 million as of the end of September, so it might already have enough scale to remain competitive with the big insurers. Molina Health and WellCare are smaller, but with 4.2 million and 3.7 million members, respectively, they are not tiny operations.

Still, with so much uncertainty in the air, I have a hard time getting excited about any of these stocks, even with today's lower prices. That's why I think that the smart play is to keep away until we know more.