While the U.S. automotive industry as a whole is currently plateauing, the difference between the performance of Japanese automakers and Detroit automakers is quite stark. While Detroit automakers are cranking out massive profits thanks to accelerated sales of SUVs and full-size trucks, Toyota (NYSE:TM), Honda (NYSE:HMC), and Nissan are having a rougher go of it as demand for their flagship passenger cars has taken a hit. Let's look at highlights from the Japanese automakers' recent quarter and zoom in on some potential headwinds.

Toyota's second quarter of its fiscal year 2017 was a bit rough due to exchange-rate pressures and a drop in revenue. Starting from the top, Toyota's second-quarter revenue declined 8.8% from the prior-year period, and its operating income plunged nearly 43%, to 474.6 billion yen ($4.55 billion). That result was slightly weaker than the consensus estimate of 476.26 billion yen, according to Thomson Reuters.

The main story behind Toyota's slumping operating income was easy to see: the rising value of the Japanese yen compared to the euro and U.S. dollar. Every dollar generated by Toyota in the U.S. is now worth fewer yen than in the prior year, which leads to huge volatility for the company, as it reports its financial results in Japanese yen. In fact, the effects of foreign exchange rates hindered Toyota's operating income by a staggering 330 billion yen -- this drop was almost entirely responsible for the nearly 353 billion-yen decline in operating income during the quarter.

Despite the second-quarter results coming in weaker than expected, Toyota actually raised its full-year guidance based on a lower value for the yen versus the dollar than it had previously forecast. Because of that, Toyota's operating income is expected to check in 100 billion yen higher than the previous full-year forecast of 1,600 billion yen.

North America is typically Honda's profit engine, as it is for most automakers, but its performance in the region was overshadowed by Honda's results in Japan and Asia during the second quarter of fiscal year 2017. And while Honda was also negatively impacted by a stronger yen compared to last year, it was able to offset the impact much better than rival Toyota.

Sales revenue declined nearly 10%, but the company managed to grow its operating profits thanks to cost reductions, newer products, a decline in quality-related expenses, and the impact of pension accounting treatment. More specifically, Honda's operating margin jumped 240 basis points, to 7%, which helped drive a 38% increase in operating profit during the second quarter. A huge chunk of Honda's profit increase came thanks to a one-time gain due to the adjustment of the company's pension plan.

In fact, here's a great illustration of Honda's operating profit changes, which emphasizes how much currency woes hurt its results and how much the pension gain helped. 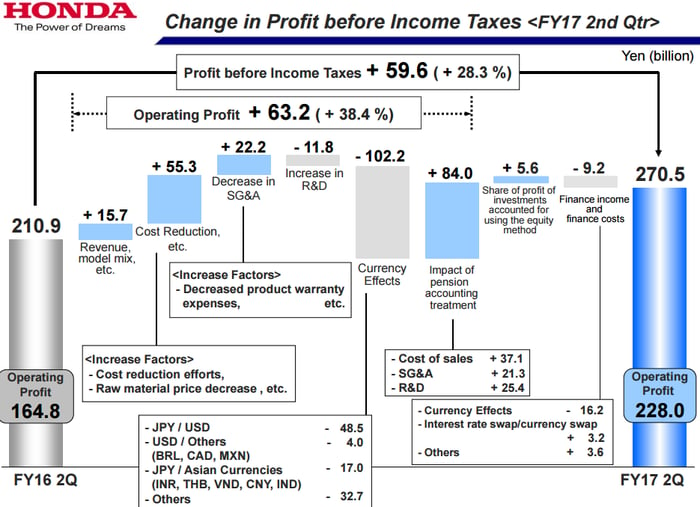 There were definitely similar takeaways from the two prominent Japanese automakers. For one thing, the results serve as more confirmation that auto sales in the U.S. are peaking. Toyota dialed back its North America sales forecast by about 60,000 units for the full year, and Honda also dialed back its sales estimate, but only by 5,000 units, as it hopes the new CR-V will support sales.

Executives at other Japanese automakers have a similar take on the U.S. market. "It's a peak and we don't see a potential for further growth" in the U.S. industry, said Hiroto Saikawa, co-chief executive officer of Nissan, at a press conference. "Incentives are rapidly growing in the industry, and we are paying close attention to it."

As I've said before, with auto sales peaking in the U.S. market, the focus should switch from year-over-year sales gains to incentives and average transaction prices. For automakers, especially Japanese automakers dealing with foreign-currency headwinds, keeping incentives stable as a percentage of ATPs will be critical to continue posting profits that are up to Wall Street's expectations.

The next year will be very telling in terms of how automakers choose to approach a peaking U.S. market. A lot of profitability is up in the air, so stay tuned.