Investors have watched the biggest publicly traded U.S. manufacturing stocks notably outperform the S&P 500 index so far in 2016. This comes as industrial production growth remains negative and indices of manufacturing sentiment continue to be subdued. Clearly, the market believes there could be some sort of recovery coming. What's going on, and which are the best manufacturing stocks to buy? 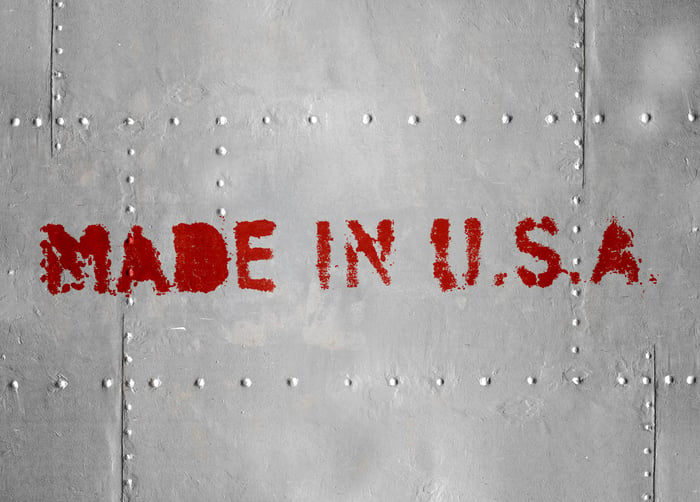 What does the market look like for manufacturers today?

As you can see in the chart below, it's been a difficult year or so for U.S. manufacturing companies. Industrial production growth has turned negative, and a widely followed barometer of manufacturing, the Institute for Supply Management (ISM) Purchasing Managers Index, has been below 50 in 2016 -- a reading below 50 indicates contraction. 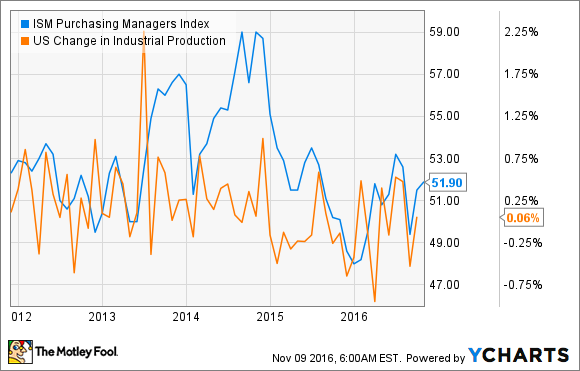 That said, industrial conditions are far from uniform. In fact, the brunt of the slowdown has been felt by heavy machinery industries exposed to oil and gas, and metals and mining spending. Meanwhile, other industries such as aerospace and construction have fared relatively better.

How to play the sector

One way is to buy cheaply rated stocks ahead of an anticipated stabilization in spending conditions in the kinds of industries (oil and gas, metals and mining, heavy machinery) that have been hit in the last year or so. With this approach, you will be buying companies set to significantly increase earnings given an eventual pickup in commodities-related capital expenditures (capex).

The good news is that following a sharp slump in recent years, prices of oil, metals, and minerals are actually up in the mid teens year to date. 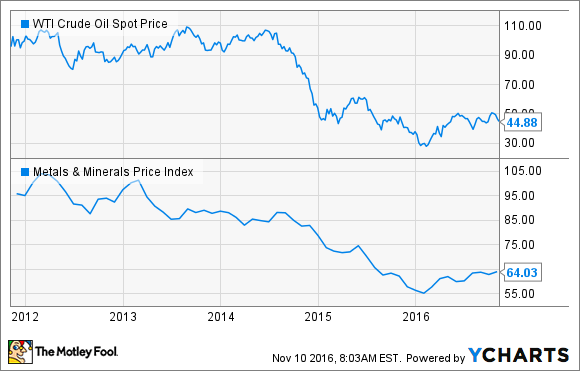 The bad news is that the increase hasn't fed through into spending yet. Because of that, company after company from the commodity-related sector has disappointed with its earnings, and has been left with reduced near-term earnings potential as a result.

To recap, in this line of thought you are looking for a company with a good forward valuation, but also with upside from recovering commodity and general industrial conditions.

The best manufacturing stocks to buy

The following table shows a common valuation metric, namely enterprise value (market cap plus net debt) divided by EBITDA. The final column describes commodity capex exposure and how it hit earnings in 2016 -- remember that the harder a company is hit, the more likely that it has exposure to the upside of increasing commodity capex spending.

United Technologies appears cheap, but its upside really relates to the successful execution of its plans to ramp up production of its geared turbofan engine. Meanwhile, Emerson Electric would surely benefit from increased process industry spending, but the company is in the midst of a reorganization, and so also has execution risk.

Ingersoll-Rand is a very attractive stock -- not least from the margin-expansion opportunity in its all-important climate segment -- but it's not really a play within the theme of recovering commodity spending. Similarly, Honeywell International is an attractive stock in its own right but doesn't offer significant upside in the context of the current theme.

All of which leaves a short list of MSC Industrial Direct Co. (NYSE:MSM), Dover Corporation (NYSE:DOV), and Rockwell Automation Inc. (NYSE:ROK). All are attractive for three reasons.

First, they sport prodigious free cash flow (FCF), and a look at FCF-based valuations shows how cheap they are. 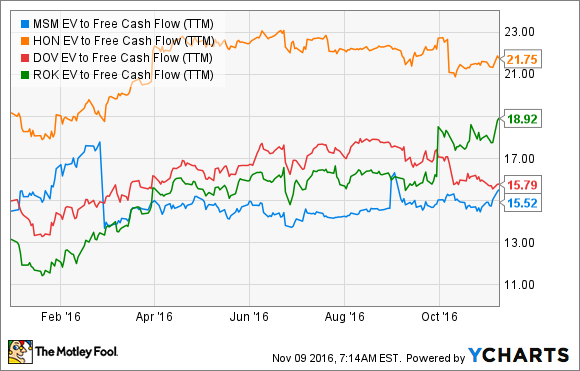 Second, all have significant upside potential in the event of a recovery in commodity spending. MSC Industrial's machinery and metal-cutting customers have been hit by lower energy-related spending, while Rockwell Automation and Dover Corporation have both cut guidance this year.

Third, they all have long-term growth drivers. Rockwell Automation's sensors, controls, and software architecture are a key part of the Industrial Internet of Things (IIoT).

Meanwhile, MSC Industrial Direct is actively investing in order to consolidate a highly fragmented industrial supply industry, and Dover Corporation is in the process of expanding its international sales while seeking new industry verticals for its engineered systems products.