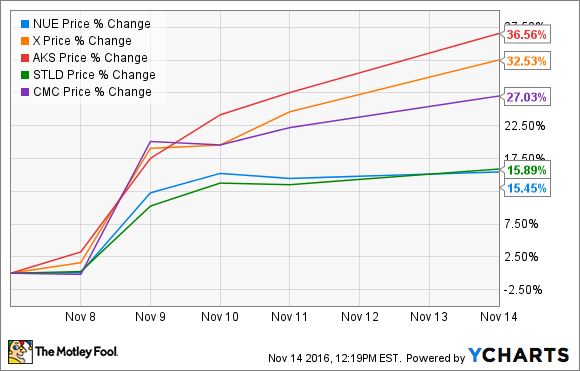 Needless to say, Mr. Market is buying into a Trump Administration that says it will be tough on foreign competition against American manufacturing. And it's hard to argue that any domestic industry has been as hard-hit by foreign trade than steelmakers.

Can Trump really boost American steel? Will his aggressive steps to renegotiate trade deals and stamp out unfair competition from overseas be a boon for steel companies and their investors? The answer is that it could, but there are factors at play completely out of the control of whoever resides in the White House.

Let's take a closer look at the factors that affect steelmaking, and what investors should consider when deciding how -- or even if -- to invest in this industry.

The Trump trade platform and the current environment for steelmakers

From very early in his candidacy, Trump's promise to "make America great again" has been largely built on bringing manufacturing jobs back to the U.S. A common refrain from Trump on the campaign trail was that the country has been "losing badly" on trade for years. And while this matter may be up for debate, there's no denying that American steelmakers have suffered in recent years under a flood of illegal imports.

This quote from Nucor CEO John Ferriola in January sums up the pressure imports have put on the domestic steel industry (emphasis mine):

It is not an exaggeration to say that the global steel industry is in crisis. The crisis is the direct result of foreign governments -- particularly China -- blatantly subsidizing their steel industries. In further violation of international trade rules, this glut of global steel production has led to the dumping of steel products into the U.S. market. Despite the highest level of domestic steel consumption since 2006, the American steel industry capacity utilization in 2015 was around 70% and pricing for most steel products has essentially collapsed.

Here's how steel stocks have done since the start of 2014 (excluding the recent post-election run-up): 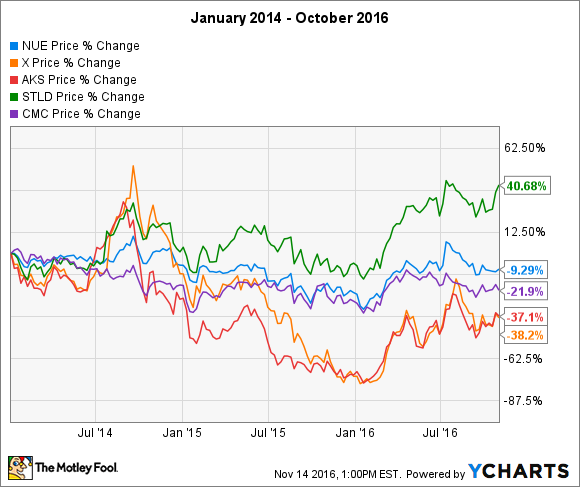 Bottom line: The industry has struggled during a period of very high consumption, and in no small part because of a large amount of illegal imports.

But the current administration hasn't been standing still on this issue. Antidumping and countervailing duties have been put in place against some of the biggest offenders, and steel imports have fallen since the beginning of the year, while prices have rebounded.

At the same time, there's still "work to be done," as Ferriola put it recently. There are more trade cases pending related to a number of steel products not protected against dumping. Furthermore, some foreign producers are attempting to bypass duties by passing their products through third-party countries. If Trump is serious about taking steps to support American manufacturing, this is an area his administration would focus on.

Trade policy is only one part -- and historically a small one -- of what affects returns for steelmakers. Steelmaking is an expensive endeavour with high fixed costs, and it's also very cyclical in nature. In other words, steelmakers can be very prone to quickly turning from huge profits to wide losses when demand turns. They aren't the most nimble of companies at the best of times.

For this reason, successful investing in steelmakers is often a product of thinking defensively and protecting against the downside risks. This may be particularly true under a Trump administration with plans to aggressively fight for American manufacturing.

The upside is that more domestic manufacturing would boost the economy -- the "rising tide lifts all boats" theory. The downside is that a heavy-fisted approach at foreign trade could actually harm domestic manufacturing if it weakens access to foreign markets. It could also lead to higher prices on many items, reducing domestic consumption because of inflation, and harming manufacturers that count on volume to drive efficiency and keep costs low.

Bottom line: Steelmakers with the most cost flexibility and a history of low-cost production have typically done well, while their competitors have struggled mightily: 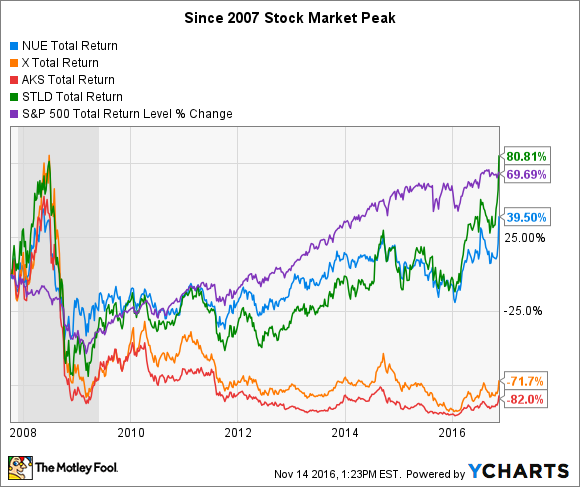 A commonality for Nucor and Steel Dynamics is steady positive cash from operations, whereas AK Steel and U.S. Steel have seen their operating cash flows swing wildly (and even into negative territory.): 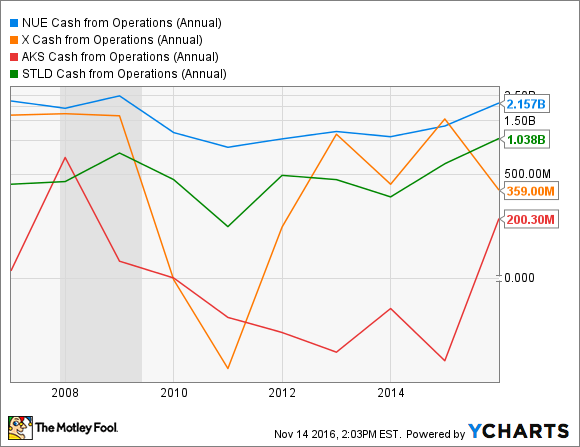 Sure, when economic demand is very strong, U.S. Steel and AK Steel's facilities may be able to produce more steel more cheaply, generating massive profits at the peak, but when the steel cycle inevitably turns down and demand slows, it will be much harder and will take much longer for those companies to bring their fixed costs down. And that can erase huge gains much more quickly than you can imagine.

So, while the Trump administration could indeed accelerate a leveling of the playing field against steel imports, there's no guarantee those actions will improve the American economy or lift demand for steel higher. And history has been very clear: Investors in inflexible steelmakers have been hammered when the cycle turns down.

Nucor and Steel Dynamics, on the other hand, have built their steelmaking operations around far more flexible mills and furnaces. They may not be as profitable at the peak as others, but they'll be able to respond much more quickly to demand in every part of the cycle -- and avoid the same losses their peers struggle with. If you want to make money in steelmakers, don't ignore this reality.