Starbucks (NASDAQ:SBUX) is one of those rare companies with a long track record of steady revenue and earnings expansion and ample runway for further growth. But after rallying during 2015, Starbucks stock has fallen this year, and currently sits more than 10% below the all-time high it reached last fall. 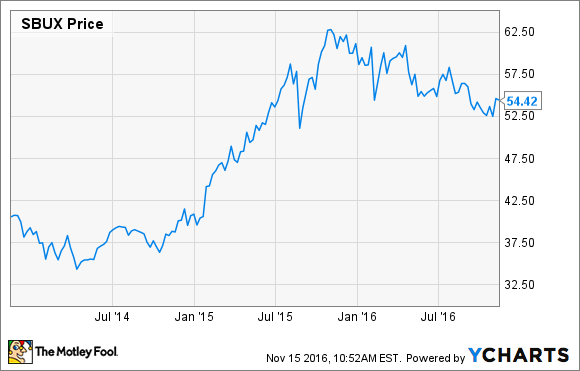 This pullback has left Starbucks shares trading for 25 times the company's projected earnings over the next year. That's a very modest premium to the broader market, considering how much more growth potential Starbucks has relative to the average large-cap company. That represents a great buying opportunity -- one that I took advantage of last week.

Starbucks closes the books on another successful year

While Starbucks' stock has languished over the past year, the company posted very strong results in its recently ended fiscal 2016. Comparable-store sales rose 5% year over year, while the company also opened more than 2,000 new stores worldwide. This drove double-digit revenue growth for Starbucks.

In addition to posting strong top-line growth, Starbucks continued to expand its operating margin in the past year. The company's 0.8-percentage-point operating margin improvement drove a 17% year-over-year increase in earnings per share.

Starbucks' margin improvement last year was particularly impressive because it faces the same wage inflation trends that have pressured margins at many retailers recently. During fiscal 2016, Starbucks spent an incremental $160 million on higher pay and benefits as well as digital investments. It was able to absorb all of those incremental costs due to underlying improvements in its profitability.

While Starbucks already seems ubiquitous in the U.S. -- it has more than 12,000 stores in its home market -- it is still opening hundreds of new stores each year. Average first-year sales for new locations is at an all-time high. This suggests that there is plenty of room for Starbucks to keep growing in the U.S.

Starbucks has plenty of room to continue expanding in the U.S. Image source: The Motley Fool.

The opportunity is even bigger in international markets, especially China. Starbucks has already figured China out. Its profitability and return on investment for new stores there is in line with its domestic performance. Now it just has to scale up.

Starbucks plans to roughly double its store count in China to 5,000 by 2021. In the long run, as the Chinese middle class grows, Starbucks CEO Howard Schultz believes that the company will have more stores in China than in the U.S. That represents a multidecade growth opportunity.

Finally, Starbucks is steadily gaining share in the packaged coffee market. This is a relatively small part of Starbucks' business, but its segment operating margin is more than double the corporate average. The launch of Teavana ready-to-drink tea in the U.S. next year could drive an uptick in this segment's growth.

To drive further revenue growth in its biggest markets, Starbucks is aggressively targeting the market for super-premium coffee. Two years ago, it opened the first Starbucks Reserve Roastery and Tasting Room in Seattle, where it roasts super-premium coffee on site in small batches. Starbucks plans to open another three by the end of 2018 and eventually operate 20 to 30 roasteries.

The original roastery has been a huge success in its own right. Starbucks recently revealed that its average transaction size is four times that of a typical Starbucks store, thanks to the pricey coffee and a unique high-end food selection.

The first Starbucks Reserve Roastery and Tasting Room has been a huge success. Image source: Starbucks.

However, the network of roasteries will enable Starbucks to begin serving Starbucks Reserve coffee at thousands of stores in the coming years. Starbucks expects to win over new customers with these higher-quality offerings, as well as enticing existing customers to trade up.

Over the last few years, Starbucks has generated consistent 10% to 12% annual revenue growth. EPS growth has been even faster, due to margin expansion and the impact of share buybacks.

Based on the growth opportunities discussed above, Starbucks has a good chance to continue growing EPS about 15% annually over the next five years, which would roughly double its EPS by 2021. This strong earnings growth will drive Starbucks stock higher.

Starbucks also pays a meaningful dividend. It recently raised its quarterly payout by 25% to $0.25, giving the stock a 1.8% yield. Between this steadily rising dividend and the significant potential for share price appreciation, Starbucks stock looks as attractive as ever for long-term investors. I expect to hold onto my newly acquired shares for a very long time.