I've long anticipated that Apple (NASDAQ:AAPL) would completely transition its products from LCD to OLED displays. The process has already started with the Apple Watch and should continue with Apple's wildly popular iPhone line. And according to astute supply chain watchers, it's increasingly likely that the process will happen on iPhones sooner than expected. 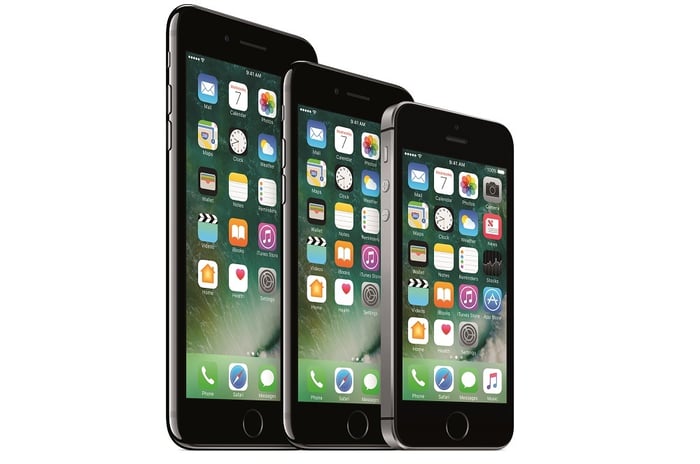 Around this time last year, multiple industry sources had already suggested that Apple was set to migrate its entire iPhone lineup from LCD to OLED. But given its massive unit shipment requirements, it was clear that sufficient manufacturing volume for the high-tech OLED displays wouldn't be available for all models until at least 2018.

In a recent note to clients, however, Barclays analysts Blayne Curtis and Chris Hemmelgarn cited supply-chain sources as stating that -- with the caveat that its designs aren't finalized -- Apple is set to reveal three new iPhones in 2017 for the iconic smartphone's 10-year anniversary. While the two smaller iPhones will probably stick to LCDs because of the aforementioned supply constraints, the largest Plus model will boast a 5.8-inch OLED display, allowing Apple to bend the display at its edges to create a curved, bezel-free design.

Of course, a curved-edge iPhone isn't entirely surprising, considering Samsung has already revealed a similar feature with the OLED displays on its Galaxy Edge-series smartphones. Incidentally, Barclays also stated that the majority of these early iPhone OLED display panels will be provided by Samsung Display and LG Display, which together represent the two largest clients of another one of my personal favorite investments, OLED technologist Universal Display Corporation (NASDAQ:OLED). This also corroborates reports detailing that such a supply agreement was struck between Samsung Display and Apple earlier this year.

For what it's worth, however, this isn't the first report suggesting that Apple will start with a single OLED iPhone next year. A few months ago, Universal Display shares hit an all-time high, after electronics equipment maker Applied Materials revealed a surprisingly strong quarter in which it received an incredible $700 million in display orders. Applied Materials later confirmed that the "vast majority" of those orders consisted of mobile OLED display equipment, while Bloomberg subsequently reported that the new OLED displays were set to make their way into Apple's lineup in 2017.

In any case, to have that assertion echoed by Barclays' comments this month serves as badly needed affirmation for skeptical investors.

Here's how to invest

All things considered, I'll reiterate my assertion that buying shares of Universal Display is the single best way to take advantage of Apple's transition to OLED.

For one thing, the reported Apple/Samsung supply agreement was rumored to last at least three years, indicating that Apple is invested in Universal Display's flagship OLED technology for the long haul.

What's more, during Universal Display's most recent quarterly conference call earlier this month, CFO Sidney Rosenblatt made it clear that the company is preparing for accelerated growth next year by "building our infrastructure to meet the growing needs of our expanding customer base." Sure enough, Universal Display shares shot higher just last week on reports that iPhone display supplier Japan Display is in talks to receive financing to shift its own manufacturing lines from LCD to OLED.

That's not to mention the prospect for Universal Display's OLED technology to continue to proliferate not only in smartphones, but also in tablets, televisions, and (over the longer term) differentiated lighting applications. For investors who buy now before the immense scale of Universal Display's growth story becomes evident, I think the stock's recent gains will prove a drop in the bucket compared with its long-term potential.