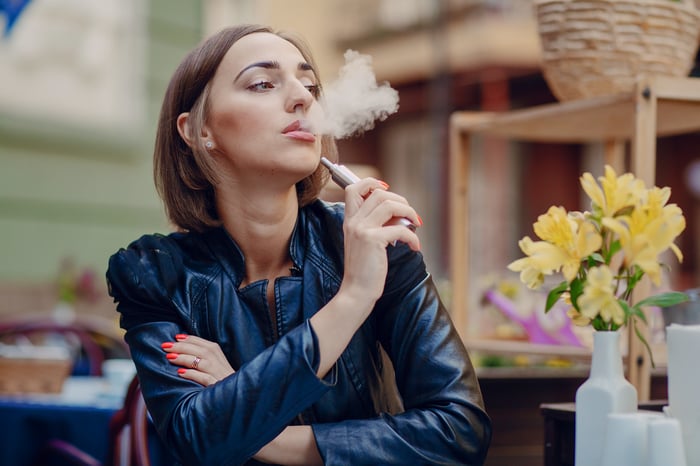 Electronic cigarettes have the potential to be the future of the tobacco industry. Although they've experienced a growth in popularity in a relatively short period of time, e-cigs still need to overcome the roadblocks being thrown in their path. Some have been put there by regulators, while others have been placed there by the manufacturers' own hands, however unwittingly. Regardless, the result is the same, and the growth trajectory of e-cigs is beginning to decline at an accelerated rate.

Burning up the tobacco industry

Between 2012 and 2015, electronic-cigarette sales quadrupled to $2 billion, and they're set to double again this year to $4 billion. Yet after years of triple-digit growth, e-cig sales have begun to fall. Earlier this year, sales were down about 3%, but the new FDA regulations caused sales to surge 25% over the past three months as consumers stocked up before the products were banned.

Aside from increasing regulatory and societal pressures, the lack of a broader uptake in electronic cigarettes can be traced to the devices themselves. While the reduced-risk products don't produce the same toxic chemicals that regular cigarettes do, they also don't provide the user with the same experience smoking cigarettes does.

Because electronic cigarettes heat a nicotine-flavored e-liquid rather than burn tobacco, it takes longer for users to get that nicotine hit from an e-cig than it does from a combustible, and the taste is reportedly inferior. E-cigs lack that tobacco flavor that smokers are looking for when they switch, and it's causing many users to take up smoking again.

Yet like the diet soda industry -- which had to combat the chemical aftertaste its artificial sweeteners left behind before their sales could catch on -- e-cig manufacturers have to rethink their devices to improve them and make them more palatable to smokers. 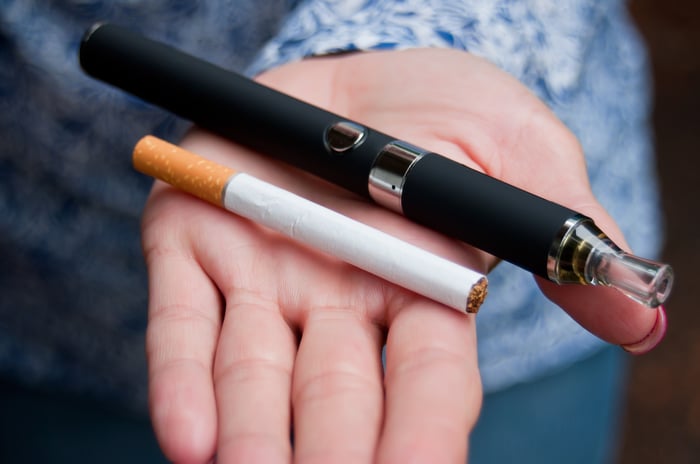 A new take on an old idea

Philip Morris International (NYSE:PM) and British American Tobacco (NYSE:BTI) may have just done that, hitting on the future of electronic cigarettes with their competing iQOS and iFuse devices. Both are still heat-not-burn products, but despite their similarities and how they achieve their enhanced user experience, there are compelling differences that make them exciting smoking alternatives.

Both Philip Morris and BAT solve the taste conundrum of traditional e-cigs by using real tobacco to give users the flavor they're looking for. How they do it is what defines them, and the market may be big enough that it doesn't have to be an either-or proposition. Both can survive and thrive side by side.

The iQOS from Philip Morris was first on the market, with limited testing in major cities in Switzerland, Italy, Russia, Romania, and elsewhere, but got its first nationwide rollout in Japan earlier this year, where it was immediately a major hit. By July it had grabbed more than 2% of the market, and that figure jumped to over 4% by the end of September.

Similar to traditional e-cigs, the iQOS consists of a rechargeable, pen-like device that a short, cigarette-looking product, branded as Marlboro HeatSticks, is inserted into. The tobacco-filled unit is then heated just enough to create a tobacco-flavored, nicotine-infused vapor. The HeatSticks contain tobacco, not just flavored liquid nicotine that makes it much closer to the experience of smoking a regular cigarette, but without the smoke, smell, and toxic chemicals. 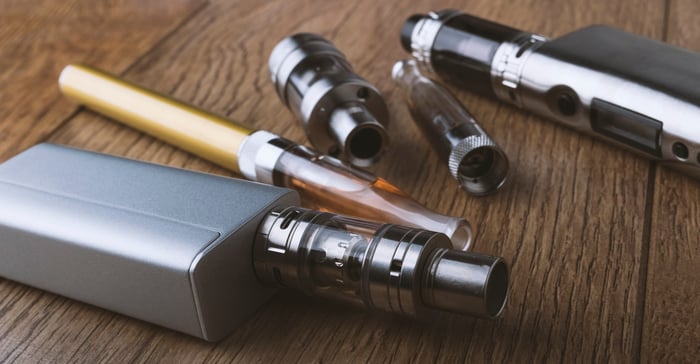 British American Tobacco (BAT) has taken a slightly different route to try to achieve the same effect. Marketed as the iFuse, it also uses real tobacco for flavor, but instead of heating the tobacco to produce a vapor, it heats a nicotine e-liquid into an inhalable vapor like regular e-cigs but then draws it through tobacco for flavor.

It's also testing other reduced-risk products. Earlier this month, BAT announced it would begin testing in Japan next month of a new device called "glo" that is very much like the iQOS and Heat Sticks. To create a vapor, it also heats tobacco in a cigarette-like device called a Neostik that's marketed under BAT's Kent brand. However, BAT had originally branded its iFuse as the glo as well, so it risks creating confusion for customers. BAT also markets a traditional e-cig, Vype, that heats nicotine-flavored liquids.

All major tobacco companies are also developing similar devices. Japan Tobacco's (OTC:JAPAF) Ploom Tech, for example, heats an e-liquid and draws it through tobacco, while Reynolds-American (NYSE:RAI), which is in negotiations to be acquired by BAT, tried but discarded a heat-not-burn device called Revo that had a carbon tip that heated tobacco. It was apparently almost identical to a previous product Reynolds sold, Eclipse, that was also shelved. But when your head of consumer marketing has to say it's challenging to use your product but to "stick with it, because it's totally worth it," perhaps you should scrap it and try again. Reynolds also sells the current best-selling traditional e-cig, Vuse, which has a nearly 36% share of the market.

As Philip Morris says, the future of cigarettes is "smoke-free," and it is only slightly ironic that it's the tobacco companies that will be leading the charge. What's most notable is that they're still relying on tobacco to get us there