The rally in Bank of America's (NYSE:BAC) stock isn't over. After climbing nearly 30% in November, shares of the nation's second biggest bank by assets are up an additional 3% on the first day of December, reaching yet another 52-week high.

Bank of America's stock got a boost this week when it was confirmed on Wednesday that President-elect Donald Trump had selected former-Goldman Sachs banker, Steven Mnuchin, to be the next Secretary of the Treasury.

The choice bolsters investors' belief that the incoming Trump administration will follow through on its promise to ease regulations on banks, which have weighed on revenue and boosted compliance costs in the industry.

Referring to the 2010 Dodd-Frank Act, the primary culprit of bank's heavy regulatory burden, Mnuchin told CNBC this week that "we want to strip back parts of Dodd-Frank and that will be the number one priority on the regulatory side."

"The number one problem with Dodd-Frank is that it's way too complicated and cuts back lending," he went on to note. 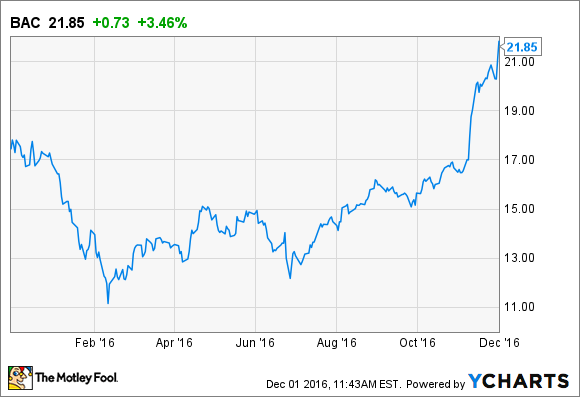 There are multiple ways that the Dodd-Frank Act does this, but none more so than its stringent capital and liquidity rules. Compared to before the financial crisis, Bank of America must reserve more than twice as much capital in anticipation of future loan losses. Because this reduces the amount of leverage Bank of America can use, this weighs on the bank's profitability.

This is made even worse because of Bank of America's size. As a global systemically important bank, or GSIB, it has to hold an additional tranche, or surcharge, of capital relative to smaller, simpler banks in the regional banking space. According to its latest quarterly regulatory filing, Bank of America's GSIB surcharge equates to 3% of its tier 1 common capital.

And it isn't just the amount of capital that's impacted by Dodd-Frank; the Act also dictates the allocation of a bank's assets between low yielding and highly liquid government securities on the one hand and higher yielding, but less liquid loans on the other.

At the end of the third quarter, Bank of America had $522 billion worth of cash or low-yielding securities on its balance sheet. That accounts for nearly a quarter (24%) of its total assets.

This makes Bank of America extremely safe, but it also cuts into its revenue and earnings, as the average annualized yield on its highly liquid assets is around 1.5% compared to the annualized yield on its loan portfolio of 3.72%. If you do the math, this means that for every $100 billion in highly liquid assets that Bank of America doesn't invest in loans, it's forgoing roughly $500 million in quarterly net interest income.

And these are just two examples of the way Dodd-Frank has made it difficult for banks to generate the same amount of revenue and earnings as they did before the crisis. There are countless other rules that, if eased, would similarly serve as a tonic for bank earnings.

Thus, assuming that Trump's administration will be able to follow through on its promise to spur lending by reducing regulations on banks, there's every reason to be optimistic about Bank of America's prospects.