November was a rough month to be an investor in pharma giant Eli Lilly (NYSE:LLY). Shares dropped by more than 8% during the period, erasing more than $6 billion from the company's market cap, according to data from S&P Global Market Intelligence. 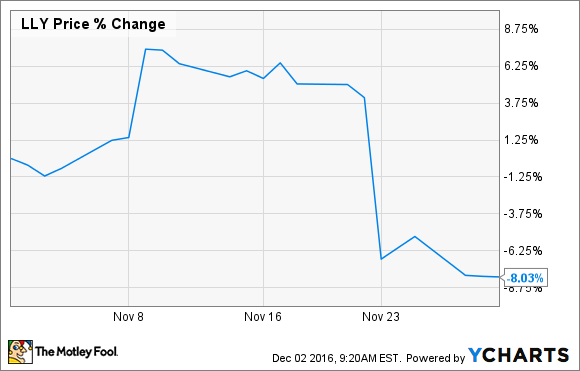 Everything was going just fine until management announced top-line data from its EXPEDITION3 trial. This phase 3 study was testing the company's experimental compound solanezumab as a hopeful treatment for Alzheimer's disease.

In early clinical trials, solanezumab helped to reduce the amount of amyloid plaque that accumulated in the brains of people with Alzheimer's disease. Some researchers believe that this plaque is a major contributor to cognitive decline, so a prominent working theory is that reducing the buildup of this plaque will lead to improvement for patients.

Unfortunately, top-line data from EXPEDITION3 showed that patients who used solanezumab did not show a statistically significant slowing of cognitive decline when compared to the placebo group. In response to the data, management decided to abandon future development of the drug.

Solanezumab was one of Lilly's most exciting late-stage clinical compounds, so the markets acted harshly to the news. Shares fell by more than 12% on the day of the announcement, which was a big enough decline to push the company deep into the red for the month.

The disappointing news from the EXPEDITION3 trial was a huge blow to investors and patients alike. Developing new treatment options for Alzheimer's disease has proven to be incredibly difficult, so watching solanezumab go down in flames is heartbreaking.

This data also raises new concerns for other promising Alzheimer's disease drugs that are designed to reduce amyloid plaque, such as Biogen's (NASDAQ:BIIB) aducanumab. This drug has already been hailed by the media as a potential preventative treatment for Alzheimer's disease, which, if true, would be a huge breakthrough. Currently, more than 5 million Americans suffer from this memory-stealing disease, so launching a potential preventative treatment would easily turn into a megablockbuster drug. However, the results from the EXPEDITION3 trial should come as a harsh reminder to investors that Biogen still faces long odds of success.

Lilly's management team stated that the study's failure will result in a charge of roughly $150 million in the fourth-quarter, which works out to approximately $0.09 per share.

Despite the huge blow, David Ricks, Eli Lilly's incoming CEO, did his best to reassure investors that the company still has growth in mind, noting "we continue to expect to grow average annual revenue by at least 5 percent between 2015 and 2020. Over that time frame, we also expect to increase our margins and provide annual dividend increases to our shareholders."