According to data from S&P Global Market Intelligence, shares of Novavax (NASDAQ:NVAX) fell 16.3% in November. The vaccine maker's stock slumped after it announced a 30% reduction to its workforce in an effort to reduce its cash burn rate moving forward. 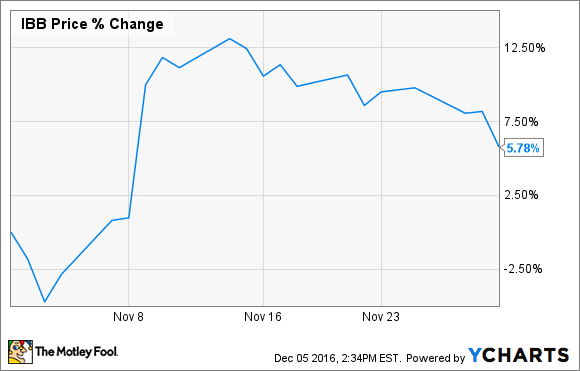 Novavax is attempting to minimize dilution for shareholders while its experimental RSV vaccine winds its way through a late-stage study in pregnant women. The stated goal of this study is to assess the vaccine's ability to prevent RSV in infants via maternal immunization.

The problem is that the biotech exited the most recent quarter with only $300 million in cash, and this study isn't scheduled to read out until mid-2020, according to clinicaltrials.gov. Moreover, this RSV vaccine candidate essentially showed no benefit whatsoever in its late-stage trial in elderly adults earlier this year, implying that its chances at conveying immunity in infants through an indirect route such as maternal immunization is probably slim at best.

With a long wait ahead for any major clinical catalysts and the specter of dilution rearing its ugly head, investors may want to watch this speculative biotech from the safety of the sidelines for now.