With the prospect of higher interest rates from the Fed, potential financial deregulation, and a promise of more infrastructure spending from Trump in 2017, the banking sector is on the rise. I've been watching Bank of Marin (NASDAQ:BMRC), a California-based, small-cap bank that's up more than most of its peers. Here's three reasons why it's doing better than others and why it's a safe bet for 2017. 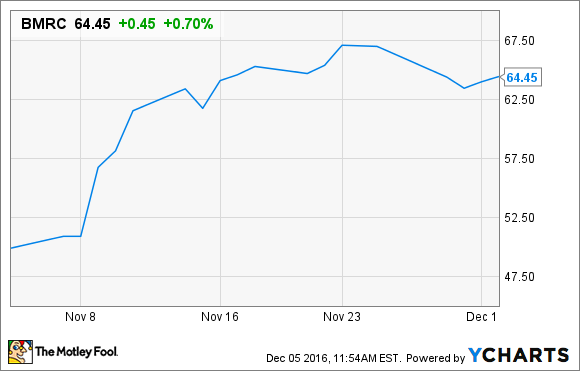 The Bay Area is growing rapidly

Bank of Marin is a small commercial and retail bank in the San Francisco Bay Area. With $2 billion in assets, it mostly serves small- and medium-sized businesses in Marin, San Francisco, and Alameda counties. These business clients are reliant on the health of the Bay Area economy, which is quite good.

Small regional banks succeed or fail based on the economy in their area. Even an extremely well-run bank will have problems if the area where their loans are located is doing poorly. Luckily for BMRC, the San Francisco Bay Area is home to two powerhouse centers of economic growth: San Francisco and San Jose. It is the only region of the country to have two regions in the top twenty, based on local GDP: Because of this higher than average regional growth, Bank of Marin is uniquely advantaged among small community banks. They've been able to grow their assets while keeping loan standards high over the past five years: 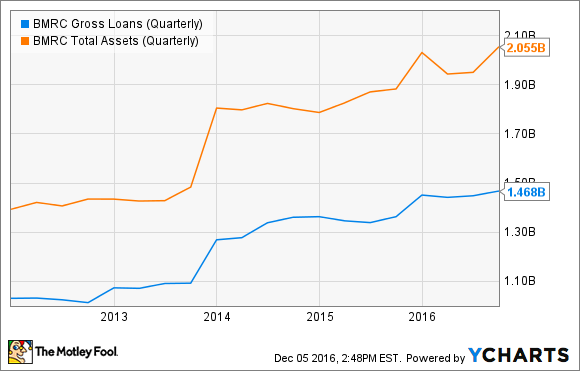 Prior to the recession, Bank of Marin had an excellent loan approval process. This resulted in an extremely low percentage of non-performing loans, or NPLs, even during the financial crisis. As I recently explained in an article on Sierra Bancorp , another small California bank, NPL percentage can be used to judge a bank's asset quality. Low percentages of NPLs indicate high-quality assets, and, by extension, a good loan approval process. Bank of Marin has that in spades:

During and after the recession, NPLs did increase, but stayed below the 2% mark -- well below the national average of 5.3% at the height of the crisis in 2010. I've added a line at 1% since you generally expect well-managed banks to stay below that benchmark. Bank of Marin never strayed far above 1%, and is now quite far below it. The current level is due partially to the success of the local economy, but only the best-run banks can reach levels this low with mature loans. Bank of Marin has clearly done a good job in this area.

This excellent loan quality makes Bank of Marin a potential takeover target for larger banks or private equity firms. A good balance sheet minimizes the due diligence risk to the deal. It also increases the chance of an acquisition performing well as a part of the new company.

No doubt this excellent performance also makes BMRC a safer than average bank to hold onto, especially if you want some exposure to Bay Area real estate while benefiting from rising interest rates.

The Bay Area economy mainly revolves around the technology industry. This has made for a bumpy ride for the region over the years. The S&P Technology ETF shows this: 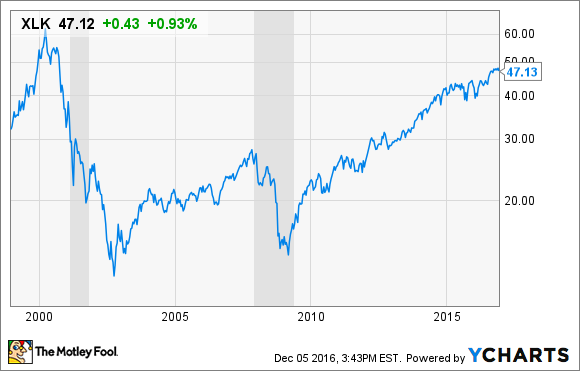 However, Bank of Marin's main operational area is much more low-tech. Because the bank lends mainly to local businesses like furniture makers, wineries, and construction companies, it is insulated from much of the boom-and-bust cycle of the tech industry. Most of its loans are concentrated in counties that have few tech companies: 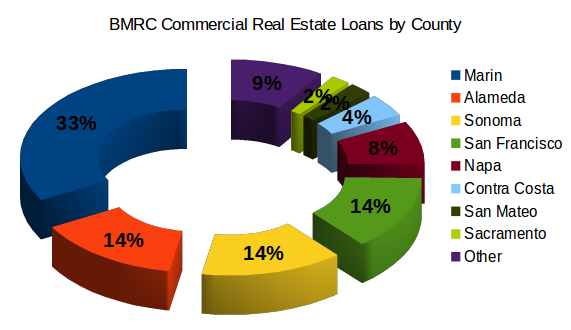 Marin county is one of the richest counties in the United States. It is mainly a bedroom community halfway between urban San Francisco and California's wine country in Napa and Sonoma counties. Alameda county is a similar bedroom community nearby, containing the cities of Oakland and Berkeley, and other smaller towns. Only 14% of their Commercial RE loans are for property in San Francisco and a tiny 2% are in San Mateo county (where many tech companies are headquartered). There is no significant concentration in Santa Clara county, the center of Silicon Valley.

This geographic diversification seems to avoid the areas of maximum volatility, but it is mostly just an accident of their founding in Marin county.  Because of this fortuitous fact, Bank of Marin is able to benefit from larger than average growth in the Bay Area. At the same time, they are positioned to avoid the brunt of the largest local risk factor: another tech crash.

The expectation of financial deregulation and an increase in infrastructure spending during the Trump presidency has bolstered banks' share prices in general -- an effect Bank of Marin has also enjoyed. This, combined with excellent long-term risk management, performance, and strategy, has caused investors to see Bank of Marin for what it always was: a relatively safe play on a vibrant local economy with acquisition possibilities. This growth is predicted to continue for the near future, but is not without risks.

The tech and start-up economy that drive its regional growth can be quite volatile, and a downward movement could have an effect on the local economy. Specifically, start-up growth may be leveling off. There appears to be a connection between venture capital funding and property values in the San Francisco Bay Area. Any drop in that could drive down valuations of local banks in the coming year.

The last two tech bubbles didn't kill off the Bay Area economy, and the next one won't either. Bank of Marin is well positioned to benefit from this growth, as it has done this year.