"It is remarkable how much long-term advantage people like us have gotten by trying to be consistently not stupid, instead of trying to be very intelligent."
-- Charlie Munger

There are a lot of stocks out there that look to be tempting investments. Perhaps there is some sort of near-term catalyst that could give the company a bump, or maybe it's selling for cheap because it hit a rough patch. While these sorts of conditions can exist for great businesses, they can also exist for ones that aren't as attractive. Buying less-than-great businesses for deceptively good reasons is probably one of the best ways to lose money in the market.

So we asked three of our contributors to each highlight a stock they see as one that could be tempting for investors but should be avoided. The three they highlighted were Ariad Pharmaceuticals (NASDAQ: ARIA), Harley-Davidson (NYSE:HOG), and CVR Energy (NYSE:CVI). Here's a quick rundown of why these companies aren't the ones you're looking for.

Don't buy the hype with this cancer stock

George Budwell (Ariad Pharmaceuticals): The rare cancer specialist Ariad Pharmaceuticals is barreling toward a potential regulatory approval for brigatinib as a treatment for ALK+ non-small-cell lung cancer in patients previously treated with Pfizer's Xalkori (crizotinib). The bottom line is that a brigatinib approval come next April could result in the drugmaker's top line nearly doubling next year, according to some of the more bullish analyst estimates floating around right now.  Ariad would also become less reliant on its flagship product, Iclusig, to drive growth moving forward.

Perhaps as an added incentive to buy this stock ahead of the company's second product approval, Ariad has made no secret of its desire to court a buyer. And with two cancer drugs on the market, there is a case to be made that the company could fetch a hefty premium in a buyout scenario.

However, I think investors may want to pump the brakes on any breakout scenarios next year -- regardless of whether regulatory approval is given. The fact of the matter is that Ariad's shares are presently trading at over six times the company's high-end revenue estimate for 2017, and 10.5 times the Street's revenue consensus estimate for next year.

In other words, Ariad's valuation is arguably already stretched -- implying that brigatinib's regulatory approval is baked into the stock price at this point. So it's hard to imagine a buyer upping the ante much further for two drugs that simply aren't franchise-level products. Iclusig's recent growth, after all, has been supported heavily by controversial price increases that may draw the ire of the Trump administration next year.

A ride to nowhere?

Daniel Miller (Harley-Davidson): It almost seems blasphemous to say this about one of the most globally recognizable name brands over the past century, but in my opinion, this ride might be going nowhere for investors.

While the motorcycle maker has an iconic brand, 100 years of manufacturing experience, and a strong dealership network that make this stock tempting, there are just too many question marks for me to own this stock. Not only does Harley-Davidson operate in a cyclical industry similar to the automotive industry, which is currently plateauing in the U.S., but it's arguably even more volatile, given the discretionary nature of motorcycles, compared to SUVs and trucks, which are often used as work tools.

Not only is the company's product a discretionary one in a cyclical industry, but Harley-Davidson's core demographic of men over 35 is heading toward retirement age more quickly than Harley is attracting younger males to its products. That's led to a flat top line over the past 10 years, and declines elsewhere in its business. 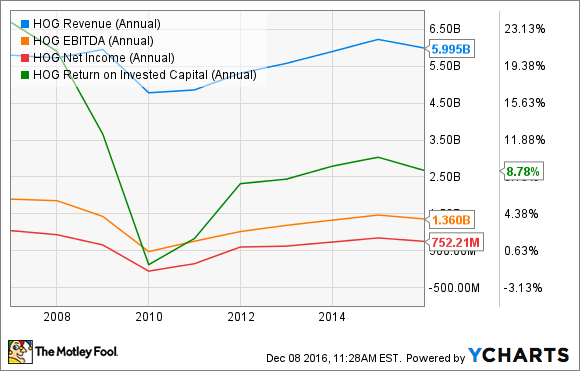 Furthermore, new and innovative brands such as Polaris Industries are likely to continue introducing compelling products, such as the Slingshot, that will be aimed at a younger demographic Harley desperately needs to win over.

Sure, Harley could figure out a winning strategy to lure younger customers and adapt, rather than die, as many brands have done during the past century when Harley-Davidson thrived, but all of those question marks mentioned above, in my opinion, outweigh the company's iconic brand and manufacturing prowess. It's a tempting stock, but a potential ride to nowhere isn't something I'm willing to risk.

The foundation isn't as strong as it seems

Tyler Crowe (CVR Energy): Shares of CVR Energy have been on a bit of a tear lately. Part of that has to do with the fact that there is growing optimism in the oil and gas industry in general, and then there is the fact that the company's largest shareholder played a pivotal role in picking the person who will be largely responsible for regulating the industry over the next four years. On the surface, an investor might be tempted into thinking that buying shares of CVR Energy now would be a good bet on a stock that also pays a dividend yielding 8.1%.

Here's the catch, though: There are larger market trends that are likely going to hold this company back for some time, and could even put its payout into question. CVR Energy generates its revenue from ownership in two subsidiary master limited partnerships -- refiner CVR Refining (NYSE:CVRR) and fertilizer manufacturer CVR Partners (NYSE:UAN). These two partnerships pay a variable rate distribution to the parent company based on cash available at the end of each quarter. Problem is, those distributions have been pretty tepid lately, and they don't look like they are going to improve soon.

For the refining arm, rising crude oil prices have decreased the price spread between crude and refined products. Chances are, with the OPEC production cut coming, we could continue to see slowly rising crude prices that will constrain margins and keep cash generation low. The issues for nitrogen fertilizer aren't that much better, either. We have seen a large increase in fertilizer production in the U.S. thanks to cheap natural gas, which has caused an oversupply on the market, leading to low margins. Chances are, it's going to take several quarters to see this oversupply correct itself, and for CVR Partners to improve its cash generation.

These issues don't bode well for CVR Energy, regardless of market sentiment or changes to the regulatory environment. One of the short-term catalysts might tempt an investor into this stock, but it's best to avoid it until those other issues are sorted out.