Baidu (NASDAQ:BIDU) stock slipped about 9% this year, due to concerns about slowing sales growth, higher investments, tighter regulation of ads, and the softness of the Chinese economy. However, the Chinese search giant might fare better next year for four simple reasons.

Baidu is often called the "Google of China" because it controls about 80% of the country's internet search market. The company benefited greatly from Alphabet's (NASDAQ:GOOG) (NASDAQ:GOOGL) Google exiting the Chinese market in 2010, which caused its market share and revenues to surge. 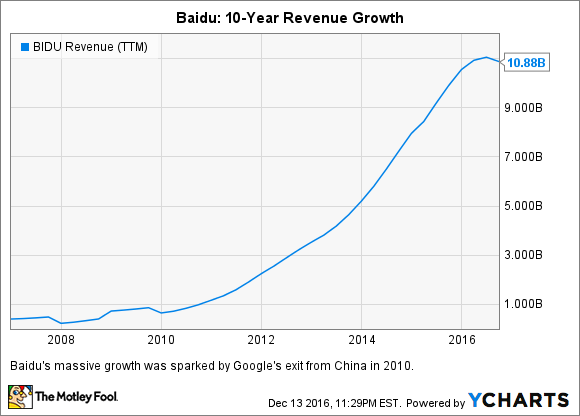 Baidu's sales growth has slowed down over the past few quarters, but the search giant still has plenty of room to grow. China has an internet penetration rate of just 52%, compared to an 89% penetration rate in the U.S -- indicating that Baidu has plenty of room to grow. Baidu also finished last year with 260 million monthly active users (MAUs) in overseas markets like Brazil, Egypt, Indonesia, Japan, and Thailand.

2. Its slowing sales growth is temporary

Baidu's revenue fell 0.7% annually last quarter to $2.7 billion, stunning investors who were accustomed to sales growth of over 30% per quarter. However, that drop was mainly caused by to two temporary headwinds.

First, it sold its stake in online travel agency Qunar (NASDAQ:QUNR) to its rival Ctrip (NASDAQ:TCOM), which essentially swapped its stake in Qunar for a 25% stake in Ctrip. Second, its ad revenues were throttled by a government crackdown on "misleading" ads (especially pharmaceutical ones) across its network. Once these headwinds dissipate, Baidu's revenue is expected to rise 6% this year and accelerate to 20% next year.

To counter Tencent, Baidu is adding similar O2O services into its mobile app, investing in Ctrip and Uber China (now part of Didi Chuxing), and building a driverless car platform. All those investments are weighing down Baidu's bottom line, but they are also widening its competitive moat.

Baidu trades at just 13 times earnings, which is much lower than Alphabet's P/E of 29 and the industry average of 50 for internet information providers. That multiple also hovers near a multi-year low. 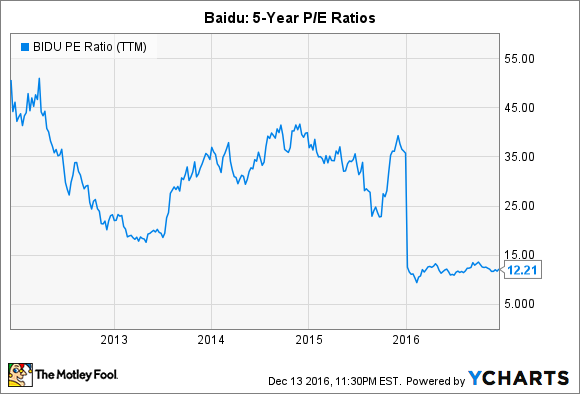 The problem with Baidu is that analysts believe that its earnings will fall 12% this year due to its big ecosystem investments. However, its earnings are expected to rebound 32% in fiscal 2017 after those growing pains subside. Therefore, if you believe that Baidu's investments will pay off, the stock looks pretty cheap relative to its peers.

Baidu has a low valuation, a market-dominating position and a growing moat. It also remains one of the safest plays on the growing Chinese tech sector.

However, the stock could remain volatile next year due to concerns about the Chinese economy, new regulations on ads, and higher-than-expected investments in new O2O features and adjacent markets. Therefore, investors should carefully weigh those pros and cons before buying Baidu.