Crude oil did not do much this week, rising about 1%. Instead, natural gas was the headline grabber and market mover after prices fell sharply, which cooled off natural gas stocks. Those weaker prices, combined with some company-specific news, led to a rather down week in the energy market. Leading the decline, according to data from S&P Global Market Intelligence, were Southwestern Energy (NYSE:SWN), Rice Energy (NYSE: RICE), Range Resources (NYSE:RRC), Noble (NYSE:NE), and Gulfport Energy (NASDAQ:GPOR): 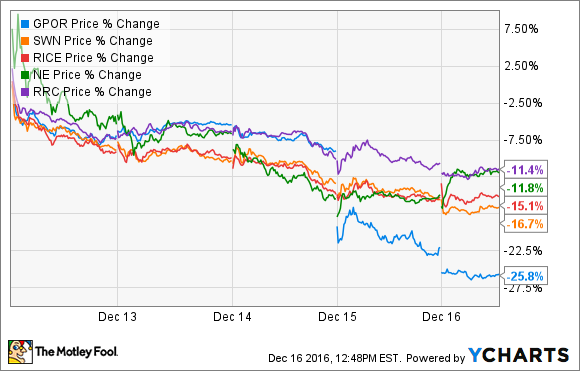 Natural gas prices tumbled this week amid market worries that a winter warm-up is in the forecast. These fears outweighed a report by the U.S. Energy Information Administration showing an unexpectedly large decline in natural gas inventories. The market overlooked that decline because warmer for the balance of December could tamp demand and quickly replace that stockpile. These concerns weighed on large gas producing companies, including Southwestern Energy, Rice Energy, and Range Resources because they rely on gas for the bulk of their income, which would go down if the warmer weather cools off gas prices.

Some analysts, however, saw this week's pullback as a buying opportunity. An analyst at Scotia Howard Weil, for example, upgraded Range Resources from sector perform to outperform while setting its price target at $49 per share. The analyst cited Range's recent acquisition of Memorial Resource Development as a catalyst because it will increase the company's exposure to higher Gulf Coast gas prices. Meanwhile, Goldman Sachs upgraded Rice Energy from neutral to buy while setting a $29 price target. Analysts cited Rice's underperformance relative to that of its peers as a reason to buy.

While Utica shale producer Gulfport Energy was also negatively impacted by sinking gas prices this week, the primary driver of its slump was an acquisition announcement. Gulfport agreed to pay $1.85 billion for a basin-entering transaction to acquire 46,000 net acres in the SCOOP play of Oklahoma. To fund the deal, the company priced 29 million shares of stock at $21.50 per share raising more than $600 million. That is noteworthy because it priced its secondary offering well below the nearly $30 per share at which the stock had been trading earlier this week. Gulfport also tapped the debt market, pricing $600 million of notes due in 2025 at 6.375%. While this deal diversifies Gulfport's asset base and adds significant future growth potential, the company paid a huge premium for the acreage compared to recent transaction values in the region as well as paying high capital costs to fund the deal.

Noble also slumped this week after the company priced a debt offering, raising $1 billion of 7.75% notes due in 2024. The company intends to use those proceeds, plus cash on hand, to repurchase existing debt. That said, with interest rates on its legacy notes ranging from 3.95% to 4.9%, the company is paying a high cost to replace these notes, though it will push back the maturity dates by several years. Also weighing on Noble this week was news that a customer will idle two of its ultra-deepwater drillships due the challenging market conditions. This decision will result in Noble earning a lower dayrate on these vessels. If that was not enough bad news, analysts at RBC downgraded Noble's stock to sector perform this week.

The oil market took a breather this week as the euphoria from the OPEC deal started to wear off. Instead, energy investors focused their attention on the return of warmer weather, which has the potential to negatively impact gas producers, especially if it lingers through the end of the year. Meanwhile, the capital market remains challenging for financially weaker energy companies, which makes it hard for them to raise capital at attractive rates.