Papa John's (NASDAQ:PZZA) investors have had a great run this year as the pizza chain delivered 60% gains to trounce the broader market's 11% boost. Sales and earnings are both spiking higher as its heavily franchised business model generates tantalizing results.

Yet the stock's rally looks overdone, especially when you stack up its latest numbers against rival Domino's (NYSE:DPZ). The industry leader is beating Papa John's in the important operating metrics of sales and profit growth, and it will need to close those gaps for the stock to earn its premium valuation.

Papa John's revenue growth is solid, but it still trials its larger rival by a wide margin. Comparable-store sales expanded by 6% last quarter to mark the pizza chain's second straight acceleration for the year. Comps kicked off 2016 flat before rising to a 5% pace in the second quarter. Papa John's is on pace to expand comps by about 4% for the full year, but that's down from 6% in 2015 and 8% in 2014.

Dominos is trouncing those recent growth numbers. Comps improved by 6% in the first quarter of the year, by 10% in the second, and by 13% in the third quarter. Thanks to what CEO Patrick Doyle called "unprecedented momentum," Dominos might even beat last year's 12% comps surge in 2016. Meanwhile, its overall quarterly revenue growth clocked in at roughly double Papa John's in the most recent quarter. 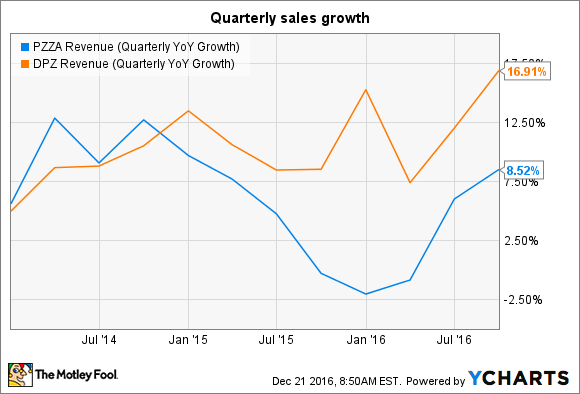 Papa John's underperforms Domino's in the profit category, too. It generated $113 million of operating income over the last nine months, which translates into a 9% operating margin. Domino's comparable figure is twice as high. 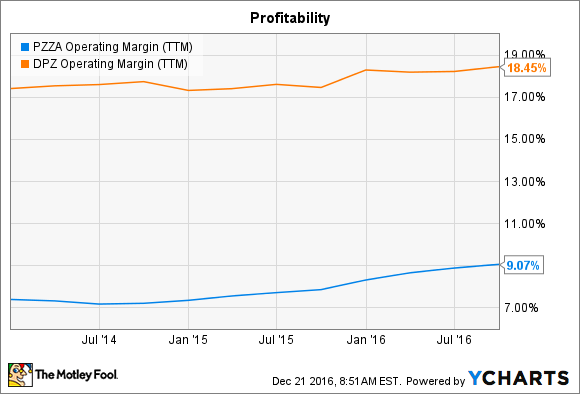 The gap isn't quite as large when it comes to bottom-line profits, where Domino's enjoys an 8.6% net margin compared to Papa John's 5.6%. Debt is the key difference between the two pizza competitors, here. Domino's has $2.2 billion of debt on the books, equating to a burdensome 28% of its market capitalization. Papa John's debt is closer to $300 million, or just 10% of its market cap.

The elevated debt load doesn't just make Domino's a riskier investment, it lowers its profitability, too. Interest expense amounted to a painful 4.5% of sales last quarter. Papa John's doesn't have an equivalent charge to worry about, though its bottom-line margin still trails Domino's.

There are reasons for the increased optimism embedded in a 60% stock price surge that go beyond the sales and profit gains. For example, Papa John's is making smart menu changes aimed at resonating more deeply with today's pizza fans. The chain recently removed more than a dozen unpopular ingredients from its pizzas, including preservatives, flavor enhancers, and the dreaded high-fructose corn syrup.

CEO John Schnatter and his executive team also appear to have a solid hit on their hands in the new pan pizza launch, which is the company's biggest menu addition in a decade.

Still, investors are paying 36 times trailing earnings for Papa John's stock right now, marking its priciest valuation of the year. While that's cheaper than Domino's 40 P/E, it doesn't leave much room for missed execution by Schantter and his team, or even a general slowdown in the industry. In my view, Papa John's will need to post several quarters of market-beating sales growth while closing the profitability gap with Domino's to justify the stock's lofty valuation.