Oil prices meandered along for most of the week, basically ending where they began. That said, there was still plenty of optimism in the oil market to go around, which drove several oil-related stocks up by double digits this week. Leading the ascent, according to data from S&P Global Market Intelligence, were Kosmos Energy (NYSE:KOS), Gastar Exploration (NYSEMKT: GST), Pioneer Energy Services (NYSE:PES), Carbo Ceramics (NYSE:CRR), and Fairmount Santrol (NYSE: FMSA): 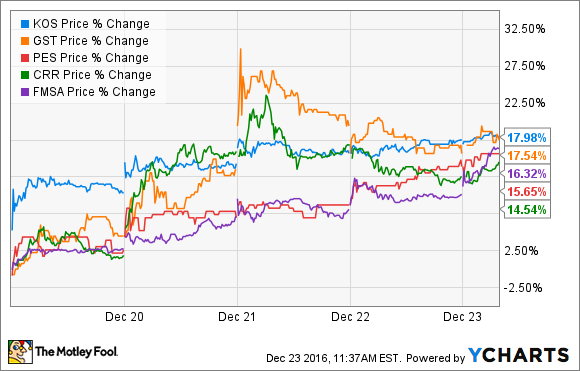 Fueling Kosmos Energy's big move this week was the announcement that it struck a partnership with British oil giant BP (NYSE:BP) to help it develop discoveries offshore Mauritania and Senegal. Under the terms of the deal, Kosmos will receive an up-front cash payment of $162 million, a $221 million drilling carry, and BP will pay up to $533 million toward the front-end engineering and design study for the Tortue gas project. In exchange, BP will receive an interest in several offshore exploration blocks. This transaction represents a win for both companies because Kosmos receives a cash infusion along with a strong financial partner, while BP gains early access to a compelling basin.

Meanwhile, Gastar Exploration jumped amid growing optimism surrounding the company's position in the STACK play of Oklahoma. It is a leading producer in the play, which the market is starting to recognize as one of America's premier resource basins. Also fueling Gastar Exploration's rise this week is the rumored sale of closely held STACK producer Staghorn Petroleum, which an analyst at Canaccord Genuity saw as a potential catalyst for the company due to the proximity of their acreage positions.

Pioneer Energy Services did not have any company-specific catalysts' fueling its double-digit rise this week. If anything, the oil-field service company's stock seems to be recovering from a dilution induced sell-off earlier this month. That is after Pioneer Energy Services chose to take advantage of its surging stock price following the OPEC announcement to raise cash and pay off debt. The company sold more than 12 million shares, netting it $65.4 million in cash, which it will use to pay off more than half of the $111.5 million of outstanding borrowings under its $175 million revolving credit facility. Investors are starting to realize that this increasing financial flexibility could help Pioneer capture opportunities as the oil market starts to recover.

Finally, an analyst upgrade was the primary cause of the rally in frack sand producers Carbo Ceramics and Fairmont Santrol. Piper Jaffray boosted Fairmount Santrol's rating to overweight and increased the price target from $10 to $14.25 while also lifting Carbo Ceramics to neutral. Driving those upgrades was the view that frack sand volumes will be up significantly in 2017 due to improving market fundamentals in the U.S. shale industry.

The oil market is cautiously optimistic that industry conditions are on the upswing. Major oil companies are starting to open their wallets for offshore drilling deals, while hot shale plays like the STACK are drawing more attention. These catalysts should lead to increased drilling activities, which is great news for oil-field service companies and frack sand producers. That said, investors need to be wary of chasing these rallies given that OPEC fueled much of this recent optimism, which is concerning given its spotty history of following through with agreements.