Successful investors don't deal in absolutes. "Never," "always," and "forever" are fine words, but potentially hazardous to your investing returns. The scientific approach, where you allow your mind to be changed by new evidence, is much better.

That being said, I would never buy Groupon (NASDAQ:GRPN) or AT&T (NYSE:T) unless their business models made some dramatic changes. However, in the spirit of accepting new evidence, I'm getting interested in Facebook (NASDAQ:FB) as an investment for the first time.

I'll keep this short and sour. Maybe even bitter.

Groupon's business model never made any sense to me. The coupon-slinger readily admits that it has no real business moat. Its competitors include lots of no-name Groupon clones, started and run on shoestring budgets. The list of rivals also includes Craigslist, comparison shopper tools, low-cost retailers both online and offline, and the coupon inserts in your local newspaper.

Cutting into Groupon's target market is easily done and not even expensive. At the same time, the company's core service only makes sense to consumers when discounts are generous. Retail partners, on the other hand, need the coupons to stay on the slim side in order to make their Groupon-powered marketing campaigns pay off. Striking the correct balance between these contradictory demands is almost impossible, and Groupon often fails.

The company's revenue growth has flattened out over the last two years, while earnings and cash flows dove. Groupon stock has lost 87% of its value since the IPO in late 2011. I'm not betting on a turnaround anytime soon. 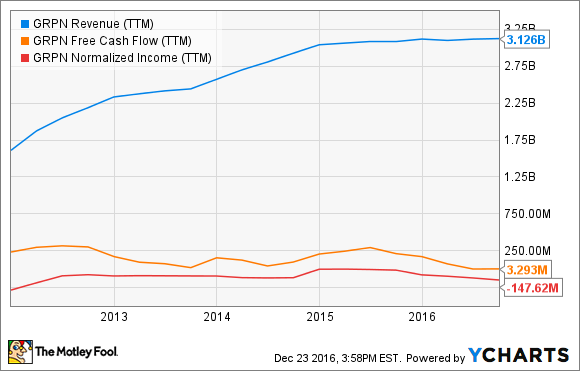 You might think that an industry titan like Ma Bell would be a paragon of stability. Its $262 billion market cap won't melt away in a hurry, particularly since it's supported by more than $16 billion in annual free cash flows.

Facing spirited competition in the wired and wireless communications markets, the company is edging sideways into the media sector. First, AT&T closed the $67 billion DirecTV buyout, giving it a much larger role in media broadcasting; now it wants to add a serious content production play by picking up Time Warner (NYSE:TWX) for $85 billion. If regulators will allow it, that is.

Ranging out of one's old hunting grounds in search of a new core business might not be a bad idea. That's hardly a ringing endorsement for AT&T's current business prospects, though. I can think of many alternative plays in AT&T's sector that make more sense right now, and not even the company's own management team can know how the Time Warner bid will work out.

No, AT&T's generous 4.6% dividend yield doesn't make up for this complete lack of forward momentum. I'm not touching Ma Bell with a 10-foot selfie stick until the company figures out what it really wants to do -- and how.

When Facebook entered the public markets, I wanted nothing to do with it. The company had already established itself as a giant in the social media world, but had yet to develop a profitable business model. At the end of 2012, Facebook's earnings were falling close to the breakeven point in spite of reasonable sales growth. The stock ended its first calendar year 30% lower.

Social networks have a tendency to fall out of favor very fast, without warning. Many former leaders in this space have fallen by the wayside and often into bankruptcy, including once-familiar names like MySpace, Friendster, Orkut, and Classmates. Yes, these were big social media names in days of yore. If you don't recognize them, that's just a testament to how terribly far the mighty can fall.

There's no reason why Facebook would be immune to a similar fall from grace. Another social media service could rise up and take Facebook's throne at any time, or the leader could simply fall out of favor gradually over time and slide to the middle of the pack. Either way, it would be the end of Facebook as an investable stock. This risk will always hang over Facebook's stock like a thunder-murky cumulonimbus cloud.

The reason I'm starting to accept that enormous risk is that Facebook has been hedging against the next social media revolution. If you can't beat them, join them.

The company paid $1 billion for picture-sharing service Instagram in 2012, another $19 billion for messaging specialist WhatsApp two years later, and even branched out into virtual reality tools with the $2 billion buyout of Oculus VR later in 2014. Under Facebook's wing, WhatsApp and Instagram have developed into serious businesses with bright futures. If the Facebook mothership goes down, one or more of these alternative services could shoulder the load of carrying the company into the future. If that day ever comes, it might be the correct time to take a position in Facebook at a massive discount.

I'm not ready to buy Facebook quite yet, and may indeed never take that leap. But the stock is not on my blacklist anymore. Anything is possible.