Restaurants faced several challenges in 2016 as concerns about a "restaurant recession" swept through the industry during the second half of the year. According to conventional wisdom, a combination of food deflation, overexpansion, and even the distraction of the election have caused comparable sales growth across the industry to slow rapidly. Rising labor costs have also been a challenge as states hike their minimum wages and the labor market tightens. Many chains have seen labor costs go up in the process, taking a bite out of profits.

However, traditional fast-food stocks have been surprisingly resilient, and the industry has actually outperformed the broader market this year. 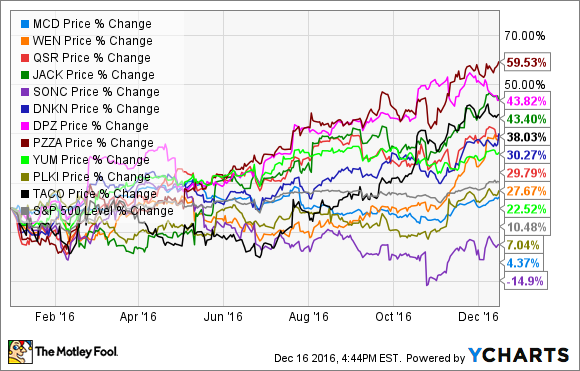 By contrast, fast-casual stocks have mostly underperformed the S&P 500. 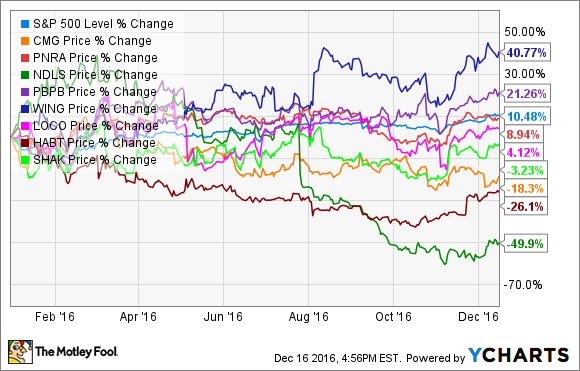 Looking at just the fast-food stocks, you can see from the chart above that there's one that clearly stands out as the worst performer: Sonic Corporation (NASDAQ:SONC). It and McDonald's (NYSE: MCD) were the only fast-food chains to underperform the S&P 500 by more than a few points.

While much of the fast-food industry's comparable sales growth has slowed, investors seemed to make allowances for some chains, blaming it on industrywide issues. However, Sonic's sales slide was bad enough that it forced a sell-off in the stock.

In its quarter ended Aug. 31, the drive-in chain reported a comparable sales decline of 2%, compared to an increase of 4.9% in the quarter a year ago. The stock plummeted on the news as management also projected a continued decline in fiscal 2017, seeing comparable growth between -2% and flat. By contrast, that figure jumped 7.3% in fiscal 2015 and was up 2.6% in fiscal 2016, which ended Aug. 31.

Like many other fast-food chains, Sonic has been focused on refranchising restaurants and using that money to return capital to shareholders through share buybacks. Over fiscal 2016, the company was able to reduce shares outstanding by nearly 10%. However, net income still fell over the year, a sign that management may want to invest that money in operations instead of just buying back shares. The stock's 14% slide this year also indicates that those repurchases were poorly timed.

The next-worst performer of the year was McDonald's, though with a 4.4% gain thus far this year, the Golden Arches only modestly underperformed the market.

Like Sonic, whose shares are still up more than 300% over the past five years despite this year's pullback, McDonald's modest gains this year may be in part a result of last year's surge. The stock gained more than 40% from August 2015 to May of this year as excitement built for its all-day breakfast launch in October 2015, which delivered a marked improvement in comparables in the fourth quarter of last year and first quarter of 2016.

However, like other chains, McDonald's began experiencing a slowdown in the spring. In the third quarter, comparable sales growth decelerated to just 1.3% from 5.4% in the first quarter as management cited "continued industry softness." Though McDonald's underperformed the majority of its peers this year, the company has improved its competitive position with moves like all-day breakfast, switching to more humane food sources like chicken free of human antibiotics, and refranchising restaurants to reduce operating expenses and free up cash.

Stocks have rallied broadly since the election of Donald Trump, with many fast-food stocks jumping double digits since then. 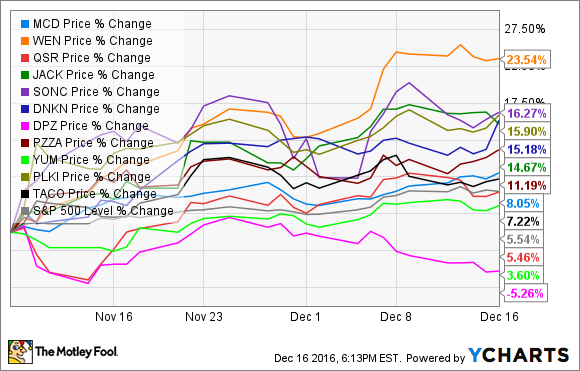 The market sees a Trump administration as being friendlier to the industry by helping to keep labor costs down -- for instance, by maintaining the current minimum wage or eliminating parts of Obamacare that require employers to pay for healthcare. Restaurants are among the most labor-dependent sectors in the market, as labor costs can take up as much as a third of revenue at company-owned outlets. The nomination of Andy Puzder, the CEO of the Carl's Jr./Hardee's parent, as Labor Secretary could also give restaurants a friend in the administration who's willing to fight for their interests. More broadly, if the economy continues to expand and wages and employment increase, fast-food restaurants should also benefit as they're one of the primary recipients of discretionary income.

Though the government's influence on restaurants is more limited than in some industries, the market seems to be optimistic about the above factors going into next year. That could bode well for Sonic and McDonald's, as well as the rest of the industry, if reality follows expectations.