From November 8 (the day of the 2016 Presidential Election) to November 11 (the end of the week of the election), shares of Sturm, Ruger (NYSE:RGR) stock fell 26% while Smith & Wesson (NASDAQ:SWBI) stock fell 25%. Which kind of begs the question:

What the heck is going on here? Are investors in gun stocks afraid that Donald Trump will take away their guns? Donald Trump?

After all, this is the man who argued all through the 2016 campaign that he is "a 2nd amendment person," that he is "against gun control," and who even advocated "making all concealed-carry permits valid in every state." Is this really the kind of guy who might take away your gun?

Well, it's essential to recognize that Donald Trump has flip-flopped on gun control before -- and could do so again. For example, in his 2000 book The America We Deserve, Trump declared unabashedly: " I support the ban on assault weapons and I support a slightly longer waiting period to purchase a gun."

So what might it take for Trump to flip right back into gun control mode?

The politics of gun control

Six years ago, I pointed out that despite significant worries among gun owners that President Obama would impose strict regulations on guns, the president (up until then) had taken no clear actions suggesting gun control was at the top of his agenda. (See "Obama Doesn't Want Your Guns," September 2010). To the contrary, campaigning in 2008, then candidate-Obama declared: "I believe in the Second Amendment. I believe in people's lawful right to bear arms. I will not take your shotgun away. I will not take your rifle away. I won't take your handgun away."

But after a wave of gun violence stretching from Aurora, Colo. to Newtown, Conn. in 2012, that began to change. Public outcry over mass shootings forced President Obama's hand, and in relatively short order, Obama morphed into the gun control advocate that gun owners had always painted him to be. Renewing past calls for "common-sense gun safety laws," and decrying criminals' access to "weapons that were designed for soldiers in war," he advocated "seeing if we can get an assault weapons ban reintroduced."

So could something similar happen with President-elect Donald Trump? And if so, what would that mean for investors in gun stocks?

It could happen. After all, Donald Trump has a well-known habit of making abrupt shifts in policy, some announced by phone, others by tweet. While President-elect Trump may currently deny he has any intention of regulating guns, there's no telling how President Trump might react to new headlines describing a surge in gun violence some months into his administration. So what might that mean for gun owners, and gun investors?

Given the stridence of Trump's anti-regulation rhetoric on the campaign trail, I suspect any hint of a reversal of opinion by President Trump would take investors -- and gun owners -- by surprise. It would be a true "black swan" event, which could magnify its effect on gun stocks in the market.

The funny thing about guns

Investing in guns is a funny business.

Ordinarily, we think that "good" headlines are good news for stocks, while "bad" headlines are bad. For example, when reports surfaced of Ford Explorer SUVs having a rollover problem in the late 1990s and early 2000s, this hurt Ford Explorer sales. Similarly, headlines criticizing Mylan for jacking up EpiPen prices crashed Mylan's stock price earlier this year. But the same logic doesn't seem to apply to the gun industry. Time after time, when news breaks about a mass shooting, gun sales spike, and gun stocks skyrocket!

You can see the effect here in a chart describing how Sturm, Ruger's stock reacted in the week after the Aurora, Colo., movie theater shooting ... 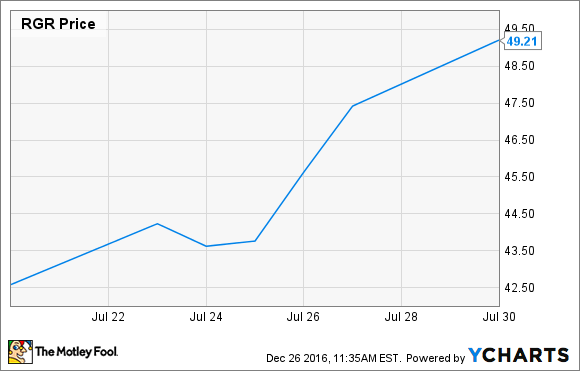 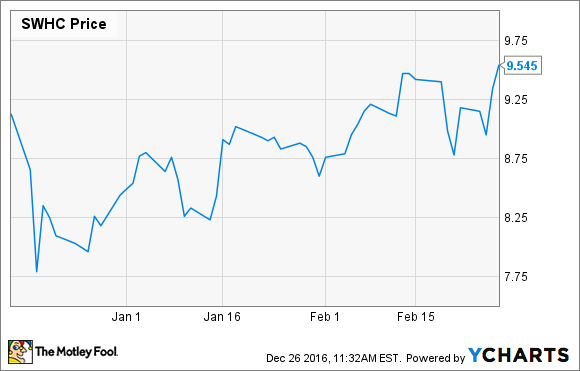 Why does this happen? The decision chain works like this: Gun violence spurs calls for gun regulation in Congress. The expectation of gun regulation makes gun buyers fear the guns they want to buy will soon be banned. To "beat the ban," they rush out and buy guns. Gun makers' sales and profits therefore soar, and the price of gun stocks -- which you'd think would be hurt by an expectation of new regulations -- actually rises.

The future for gun stocks under President Trump

As of today, all indications suggest that President-elect Trump stands firm in his support for gun rights. Crazy as it might sound, though, gun investors' best hope for rising stock prices, at least in the near term, lies in Trump changing his mind about guns. That's the kind of black swan event that could really send these stocks soaring.

Is Donald Trump Going to Take Away Your Gun? @themotleyfool #stocks $RGR $SWBI Next Article
Current