OK, hands up. I'm cheating. It's supposed to be one stock idea, but The Home Depot, Inc (NYSE:HD) and Lowe's Companies, Inc. (NYSE:LOW) are largely interchangeable companies, so in order to diversify stock-specific risk, it's a good idea to buy both of them together. But why are home improvement retailers the kinds of stocks you can buy and hold forever? I'll explain.

The arguments can be split into two separate streams. The first focuses on end markets, and the second on the companies' operational and competitive positioning.

Lowe's and Home Depot don't just depend on new house building -- after all, home improvements need to be constantly be made on existing properties. In addition, if house prices and housing turnover rise, it's likely that households will spend on home improvement. That said, there is no getting away from the argument that both companies are tied to the U.S. housing market, and that's not a bad thing.

Now, I know what you're thinking. Didn't we have one of the biggest asset class bubbles in history with housing in the last decade?

But here's the thing. That might just be the reason why housing is worth investing in. 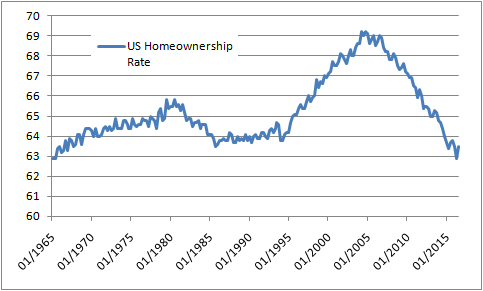 U.S. HOMEOWNER RATE HAS DECLINED SINCE THE RECESSION, SUGGESTING A RECOVERY COULD COME IN FUTURE YEARS. DATA SOURCE: U.S BUREAU OF THE CENSUS. CHART BY AUTHOR.

The conventional view sees asset prices as increasing since an efficient market duly prices in increased risk, inducing investors to stop investing in these assets. However, an alternative view holds that investors and regulators only truly recognize risk when the bubble has burst, after which they tend to overcompensate and take excessive measures to control risk.

In this line of thought, the kind of off-balance-sheet exposures to real estate that built up before the great financial crisis will not be allowed again, and that's good news for the long-term health of the housing market. All of which is not to argue that housing won't go through cycles, but all things being equal, they are unlikely to be as traumatic as the period from 2006 to 2009.

Meanwhile, the underlying demand for housing -- new household formation -- is likely to continue as long as people keep having kids and wanting to emigrate to the US.

This is where the two companies come in:

Let's take a look at a few long-term charts that help illustrate these points. 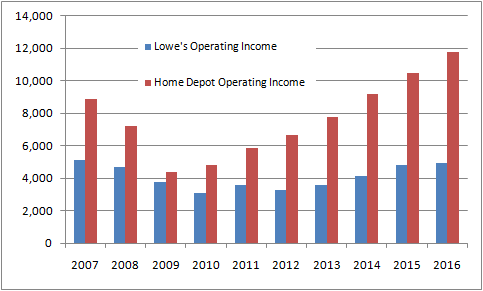 Second, dividends remain well covered by free cash flow, and both companies have the capacity to significantly increase their dividends. 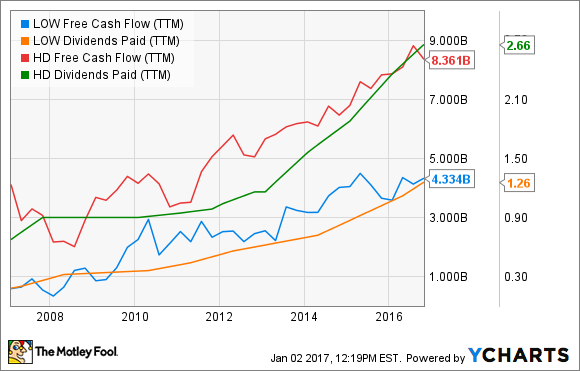 Third, strong ongoing return on invested capital means both companies should be able to reinvest their cash flows in order to generate growth, provided the home improvement market grows. 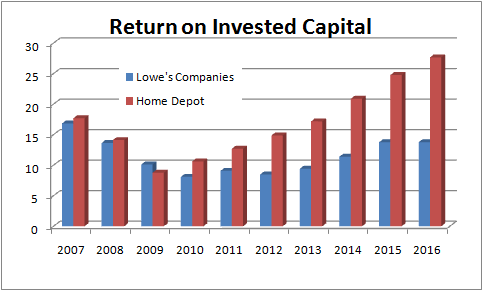 The Home Depot and Lowe's Companies are never-sell stocks

All told, if you are looking for a stock to hold forever, then Home Depot and Lowe's Companies are very strong candidates. The housing market is literally too big to fail, and policy makers will favor healthy conditions as long as it remains a key part of consumers' net worth.

Unless a multiyear recession occurs, or new household formation growth collapses, these stocks are poised to generate good long-term earnings, cash flows, and dividends for investors.