Microprocessor giant Intel (NASDAQ:INTC) didn't really deliver much in the way of shareholder value in 2016, with the stock up roughly 5% over the year, dramatically underperforming its key large-cap semiconductor peers. Nevertheless, despite disappointing share price returns, the chipmaker made several interesting moves in 2016 that could set the company up for longer-term success. Here's a look at Intel's best moves in 2016.

During the first nine months of 2016, Intel "completed eight acquisitions qualifying as business combinations in exchange for aggregate consideration (net of cash required) of $811 million." In other words, these were small, tuck-in acquisitions designed to improve Intel's technical capabilities in key areas.

The acquisition of deep-learning start-up Nervana Systems really piqued my interest. Nervana Systems was working on the development of a specialized chip and related software aimed at accelerating deep-learning applications. This technology, especially when combined with Intel's server processors, could give the chipmaker an edge in a key growth opportunity within the data center.

One caveat: Intel's track record with respect to acquisitions isn't exactly stellar, so I'll be watching closely to see how well Intel can assimilate Nervana's technology and use it to build products that ultimately generate financial returns for the company.

One of the hottest themes in the semiconductor industry is the automotive market and within that, self-driving cars. The amount of computing power required to power self-driving cars is expected to be immense, something that ought to play well to Intel's strengths given that its product portfolio is filled to the brim with high-performance processors.

However, for Intel to participate and become a significant player in this market, it's going to take more than having a portfolio of fast chips. There's a lot of work to be done to build platforms suitable for self-driving cars (both hardware and software) and a ton of effort is required to come up with a successful go-to-market strategy.

To that end, Intel hired automotive electronics industry veteran Kathy Winter to serve as the general manager of its automated driving solutions division. Intel also has former Intel Internet of Things group chief Doug Davis (who was expected to retire from Intel at the end of 2016) running the company's newly formed automated driving group.

Topping it all off, Intel's Diane Bryant revealed at a recent investor conference that the company has already booked $1 billion in self-driving car deals.

Intel seems to have made several good moves in 2016 to position itself to capitalize on the trend of increasingly intelligent cars.

Back in 2010, Intel -- a chip company -- announced that it was going to shell out a whopping $7.7 billion for McAfee -- an antivirus software provider. Intel paid a roughly 60% premium to McAfee's closing price before the announcement of the deal.

Intel's pitch (which you can see here; link opens PDF) was that security would become "on par with [Intel's] strategic focus areas in energy-efficient performance and Internet connectivity."

The reality is that this business didn't really deliver much revenue growth for the company, and its profitability remained modest for years. 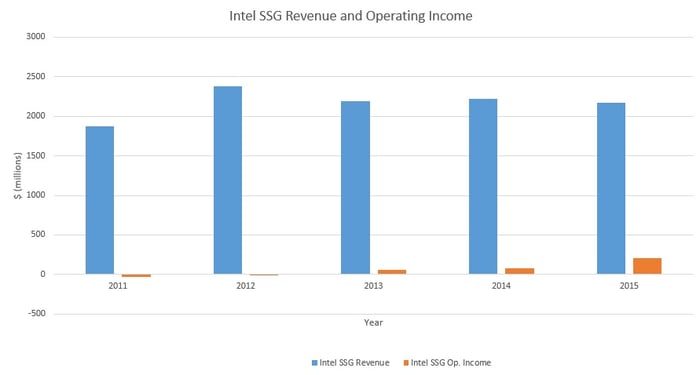 Indeed, although Intel had amassed a number of smaller software companies over the years (likely for their technology rather than their revenues), the bulk of its Software and Services Group revenue came from the McAfee business.

In 2016, Intel announced that it would be spinning out McAfee (which Intel had renamed "Intel Security") into a jointly owned, independent cybersecurity company called McAfee.

After the deal is done, Intel is expected to own 49% of McAfee while private equity company TPG Capital will own 51%. I wouldn't be surprised to see Intel quietly divest itself of the remainder of its stake over the next couple of years.

Starting to dump McAfee was a great move, one that Intel shareholders and market watchers alike should applaud.