Shares of CTI BioPharma Corp. (NASDAQ:CTIC) had notched a 20.4% gain as of 11:27 a.m. EST today. It appears the blood-cancer-focused biotech will finally be allowed to continue a pivotal trial with pacritinib. 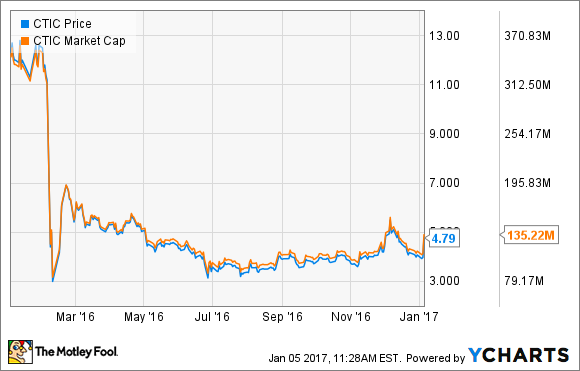 CTI BioPharma stock suffered a severe market beatdown last February when the Food and Drug Administration (FDA) slapped a partial hold on clinical studies with pacritinib. Under the hold, investigators were barred from starting treatment with the experimental myelofibrosis drug, and the development of one of the company's most important assets stalled.

The company has one commercial-stage product in the European Union (EU), but Pixuvri for treatment of extremely difficult-to-treat patients with an aggressive form of non-Hodgkin lymphoma hasn't earned an FDA approval. In the first nine months of 2016, CTI BioPharma recorded just $3.26 million in product sales, which is hardly enough to cover its extensive research and development outlays.

Adding a second product to its commercial lineup, hopefully pacritinib for treatment of myelofibrosis, is vital to achieving sustainable, positive cash flows. From the beginning of 2016 through the end of September that year, CTI recorded a $46.4 million loss despite receiving $48.3 million from pacritinib development partner Baxalta, which is now a part of Shire (NASDAQ: SHPG).

The company finished September with just $61.6 million in cash and cash equivalents, which suggests another value-diluting share offering will be necessary in the near future just to keep operations humming along. The company's market capitalization sank from around $350 million ahead of the hold to around $135 million at recent prices. That seems awfully cheap for a company with one commercial-stage drug, albeit in the EU only, plus pacritinib, which is ready to begin a pivotal study and has a chance of receiving an expedited review if its application is accepted by the FDA.

Any more hold-worthy side effects associated with pacritinib would be disastrous, but this tiny biotech is worth keeping an eye on this year. Successful results from the greenlighted pivotal trial could make today's gains seem trivial in comparison.