Anyone who thinks investing in General Electric Company (NYSE:GE) stock is merely a proxy for the U.S. industrials sector or even the S&P 500 needs to think again. In the past three years, the stock's performance has decoupled from both, and arguably it could do again in 2017. Let's look at what's been going on and what to expect from the industrial giant in the coming year. 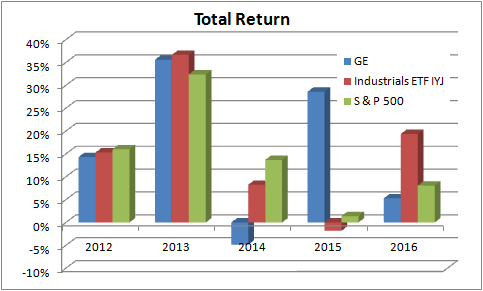 The chart above shows the stock's total return compared to the S & P 500 and the iShares US Industrials (NYSEMKT:IYJ) ETF. It's a notable decoupling, especially considering the stock contributes around 10% of the value of the iShares ETF.

The reason? One explanation relates to the ongoing transformation of the company. There are four key aspects:

In a nutshell, 2015 proved to be the breakout year for the stock, as General Electric Company dispelled many of the doubts investors may have had on the transformation. GE Capital assets were sold off, the Alstom deal got completed, and the Synchrony Financial spinoff took place. Meanwhile,the company successfully generated orders of new products such as LEAP, HA turbines, and its Tier 4 locomotive. .

Investors were richly rewarded, with a nearly 30% total return in 2015 as the execution risk inherent in these actions was dissipated by their successful completion.

Unfortunately, these investments caught up with the company in 2016, and a weak energy spending environment caused Immelt to lower the company's full-year organic revenue growth forecast range to 0%-2%, from the 2%-4% range given at the start of the year.

The market wasn't forgiving to General Electric Company in 2016, and with far less execution upside available, the stock underperformed.

There are five reasons for believing the stock could outperform its peers and the S&P 500 in the coming year.

In particular, General Electric Company's mergers and acquisitions and IIOT initiatives will help differentiate the company from the rest of the industrial sector. Given that industrial stocks seem to have priced in a recovery in end-market conditions in 2017, it might be time to buy a stock that has upside from internal execution.

With management's recent track record of delivering on its plans, buying the stock might be a good idea for 2017, and it's a nice way to get some diversification in your portfolio. General Electric Company's upside potential in 2017 lies mainly with its internal execution.