Shares of Macy's (NYSE:M) and Kohl's (NYSE:KSS) were crushed on Thursday, after both department store operators cut their earnings forecasts due to weak holiday season sales. Macy's stock tumbled 14%, leaving it near a 52-week low. Kohl's shares plunged a painful 19%, eviscerating two months of big gains. 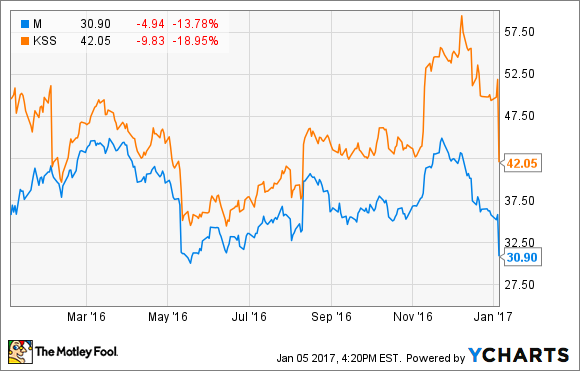 Both companies' results suggested that department stores still haven't found the answer to changing retail traffic trends. The poor results were particularly discouraging as weather trends have been far more favorable over the past two months than in the prior-year period.

In the case of Kohl's, the big stock decline was probably justified. However, investors are overreacting to Macy's weak sales performance. Store closures and cost cuts will help Macy's continue to produce strong cash flow despite its sales declines. Furthermore, real estate represents the majority of the company's value today.

At Macy's, comparable-store sales (including licensed departments) declined 2.1% during the combined November-December period. That is roughly consistent with the low end of the company's Q4 guidance range, which called for a 0.5% to 2% comp sales decline. However, it's actually better than the company's prior trend. Through the first three quarters of fiscal 2016, comp sales fell 3.5% year over year.

Macy's blamed the sales declines primarily on reduced demand for handbags and watches. On the bright side, its online business continues to thrive. The Macy's and Bloomingdale's e-commerce sites both recorded double-digit sales gains during the holiday season.

Meanwhile, at Kohl's, comp sales fell 2.1% for November and December combined. That was in line with the company's 2.4% comp sales decline for the first nine months of the fiscal year, but fell short of its internal forecast. Management noted that sales were highly volatile, with good results around Black Friday and the week before Christmas, but big sales declines for the rest of the period.

The poor sales results -- along with the timing and product mix of those sales -- forced Macy's and Kohl's to reduce their Q4 and full-year earnings expectations.

Macy's bears are missing the point

For Kohl's shareholders, the recent guidance cut is a sobering development. Kohl's stock rallied from as low as $34 last spring to nearly $60 a month ago based on optimism that the company was on track to return to steady earnings growth, driven by a combination of modest sales increases and better inventory management.

If Kohl's will instead remain on its current downward sales and earnings trajectory, the outlook for investors looks bleak. Even after Thursday's share price crash, Kohl's trades for more than 11 times earnings, which isn't that cheap for a company with declining earnings.

By contrast, the bull case for Macy's stock doesn't rely on a sales recovery. The three main potential catalysts for the stock are 1. margin improvement stemming from store closures and cost cuts, 2. a potential reduction in the corporate tax rate, and 3. real estate sales.

Corporate taxes are obviously outside of management's control. However, Macy's is moving quickly on the other two fronts.

Last August, Macy's announced plans to close about 100 stores, with most of those occurring in early 2017. On Wednesday, the company identified 63 stores that will close in the next few months, along with two others that are scheduled to close later this year. Macy's also plans to cut spending on corporate overhead. These actions will result in thousands of job cuts, but will save the company about $550 million on an annual basis going forward.

Meanwhile, in the past few months, Macy's has sold three valuable stores in Portland and San Francisco for total proceeds of nearly $350 million. It is also close to selling its Minneapolis flagship location for more than $40 million. (The latter figure is surprisingly low, given that store's gargantuan size of roughly 1 million square feet.)

Macy's owns (or ground-leases) many of the stores it is closing this year. The company will work to sell those properties to mall owners or other investors for redevelopment. Macy's also recently announced a partnership with Brookfield Asset Management that will explore redevelopment options for another 50 stores.

After its recent plunge, Macy's stock trades for just nine times free cash flow. The company's cost cuts and store closures should keep free cash flow stable or rising even if sales continue to decline. Corporate tax reform creates further free cash flow upside. This will provide plenty of cash for Macy's to maintain its generous dividend (which now yields nearly 5%) while paying down high-cost debt and continuing to repurchase some stock.