Shipping company DryShips (NASDAQ:DRYS) is coming off a terrible year in which its stock sank a disastrous 98.5%. Unfortunately, it has not stopped plunging in 2017: 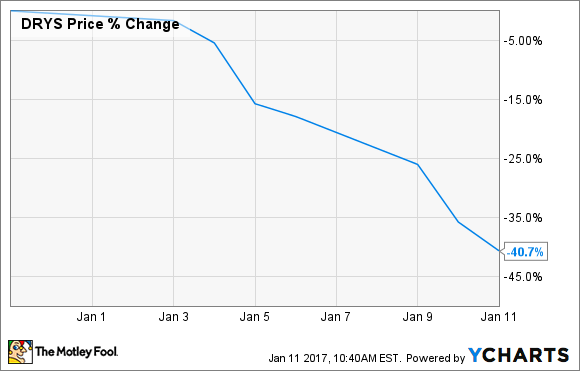 Driving that decline are recent moves that have investors questioning DryShips' ability to turn its sinking ship around.

Firming up the finances

DryShips spent nearly all of last year focused on staying afloat. This fight for survival led the company to shed assets and restructure debt to get back on solid ground. The culmination of those efforts was the signing of a $200 million revolving credit facility with an entity controlled by the company's founder as well as securing an outside investment that would allow it to raise up to $200 million of equity capital.

As a result of these and other transactions, DryShips ended 2016 with $76.8 million of cash, $137.5 million of debt, and $79 million of liquidity on its new revolver. With that liquidity in hand, the company started looking for acquisition opportunities across the shipping sector as it sought to rebuild its fleet.

Going on a buying spree

Just a few days into 2017 it found its first target. A company owned by its founder agreed to sell it a no-cost option to acquire four Very Large Gas Carriers (VLGCs) currently under construction. DryShips can buy these vessels for $83.5 million apiece, or $334 million for the group. Furthermore, if DryShips exercised its options, which it needs to do by April, it could expect deliveries in June, September, October, and December of this year.

Each vessel had already secured long-term time charters with major oil companies and oil traders, meaning that they would supply steady cash flow upon delivery. In fact, the total backlog of these contracts was about $390 million, which meant that DryShips could recoup its initial investment and then some with further upside from future contracts or vessel sales.

Earlier this week the company exercised the option for the first ship, which it expects to take delivery in June. This carrier is employed on a fixed-rate time charter for five years, with options to extend it another three years. At the contract price, DryShips stands to collect a minimum of $54 million in revenue, which could max out at $92.7 million. That works out to more than $10 million in guaranteed annual revenue over the next five years, which is in stark contrast to the company's former business model.

Currently, DryShips leases its dry bulk carrier fleet at spot market prices, which enables it to capture the full impact of the current market. That is great when prices are high, but can prove disastrous when prices plunge, which has been the case over the past year. As the below chart shows, spot rates were so low last year, that DryShips lost money because dayrates were below vessel operating expenses: 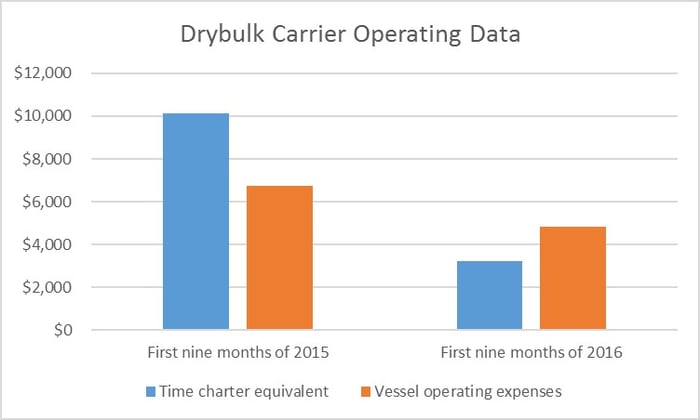 Contrast this with the revenue model of the vessels it intends to acquire in the future, which will have fixed revenue rates and relatively fixed vessel operating expenses.

We can see an excellent example of how this model works at containership lessor Seaspan Corporation (NYSE:ATCO), which typically signs all its vessels to long-term time charters. As a result, Seaspan collected $664.7 million in revenue during the first nine months of this year, up 10.7% year over year thanks to new vessel additions. Meanwhile, ship operating expenses were relatively steady at $145 million. That revenue stability came amid one of the most turbulent containership markets in recent years after a major South Korean shipper went bankrupt. While that bankruptcy did impact Seaspan, the company still managed to grow earnings and produce relatively stable cash flow thanks to a large fleet underpinned by long-term time charters.

This stability is what DryShips hopes to secure by adding vessels signed to long-term time charters. However, it will not come overnight, given that the first ship will not arrive until June. Furthermore, the company is paying a high price for this security because those four newbuild vessels could potentially use up nearly all its available liquidity. These factors have investors worried that DryShips might still be in over its head.

Investors need to realize that DryShips is a highly risky stock. While it has gone to great lengths to shore up its liquidity and stabilize its revenue stream, there's a very real risk that it could continue sinking all the way to zero if things do not work out as planned.