Smith & Wesson's stock defied logic last year. Although it's now called American Outdoor Brands (NASDAQ:SWBI) in recognition of its new focus on the rugged outdoors market, firearms still make up virtually all of its annual revenue at the moment and will continue to do so for the foreseeable future. Despite its handgun sales surging 40% in 2016 and its smaller but growing long-gun business surging 76%, the gunmaker's stock lost more than a fifth of its value last year as it was caught up in the emotions and politics that go along with guns.

While the name change is supposed to help smooth out some of that volatility, investors had other, better opportunities to make their money grow in 2016. Sure, had they been smart enough to see the rally in mining that was to occur, they could have placed bets on Cliffs Natural Resources, which an enjoyed a 376% gain last year on iron ore's improbable rally, or on Endeavour Silver, which saw its stock triple as precious-metals prices soared.

But those kinds of finds are fortuitous, really, so it might have been better to dig down into the trenches of a business' operations to find stocks that rose based on their merits. Following are two stocks that meet that criteria: craft brewer Craft Beer Alliance (NASDAQ:BREW) and graphics chipmaker NVIDIA (NASDAQ:NVDA). 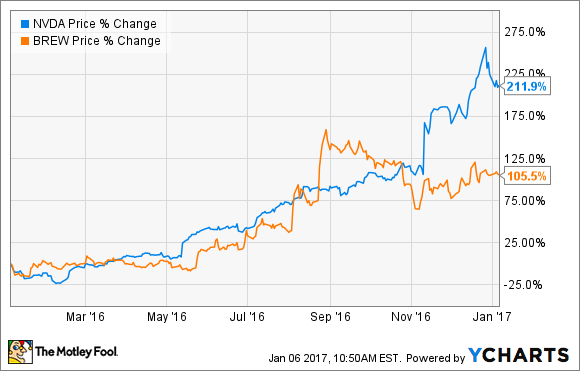 A unique opportunity for growth

For an industry that's slowing, it might be surprising to see Craft Brew Alliance stock so frothy. Mass-produced beer volumes are contracting, not growing, and even the industry's engine, craft beer, is witnessing a slowdown. Analysts everywhere expect the niche to produce just single-digit percentage growth rates after a decade or more of double-digit annual growth, and shares of craft beer leader Boston Beer (NYSE:SAM) reflect that dynamic, as they lost 10% of their value in 2016.

So why did Craft Brew Alliance's stock double? Well, decent operational performance for one, as it focused on its Kona brand, which saw shipments increase 17% over the first nine months of the year. While depletions, or shipments to distributors and retailers (considered a reliable proxy for consumer demand by the industry) fell overall as it de-emphasized the Widmer Brothers and Redhook brands, the overall change should be better for future growth.

Yet the real win for Craft Brew Alliance came about from its affiliation with Anheuser-Busch InBev (NYSE:BUD), which is responsible for the distribution of much of its beer. Because A-B completed its merger with Miller, giving it control over 70% of the U.S. beer market, the industry consolidation should give it pricing power that ought to trickle down to Craft Brew Alliance. Moreover, because of A-B's dominance in beer distribution, the craft brewer may have an easier time getting its beers on store shelves.

All that translated into a better than 110% gain for Craft Brew Alliance in 2016.

When one thinks of all the technological marvels that are just starting to break through to the public consciousness -- artificial intelligence, self-driving cars, augmented and virtual reality -- it's hard to imagine a company better positioned than NVIDIA to capitalize on all of them. The graphics-centric nature of each of these advances almost necessitates the use of the chipmaker's platforms. Indeed, the growth it is experiencing is outpacing even its own estimates let alone those of Wall Street analysts.

Check out what the future holds. The industry analysts at Accenture estimate that AI will be able to double economic growth rates in 12 developed countries in 2035, while causing a 40% increase in labor productivity. Juniper Research predicts as many as 14.5 million self-driving cars will be produced by 2025, a huge number when you think that auto manufacturers are producing some 18 million traditional cars today. And you didn't have to get a Samsung Gear VR headset for Christmas to know that augmented and virtual reality is going to be big. Digi-Capital thinks they could combine for a $120 billion market opportunity by 2020.

A company providing the graphics chips that power many, perhaps most, of those platforms will be crazy successful. NVIDIA revenue in the third quarter surged 54% to exceed $2 billion, well ahead of the nearly $1.7 billion management guided toward and trouncing the $1.4 billion Wall Street forecast. It now expects fourth-quarter revenue to hit $2.1 billion, give or take 2%, 50% higher than the $1.4 billion it generated a year ago.

And let's not forget its own products in those niches, like the AI microphone Spot that, together with its Shield TV streaming box, uses Google Assistant to create a smart home of the future. It's with good reason that NVIDIA's stock rose some 225% in 2016.

The graphic chipmaker's market cap of $56.8 billion suggests that success in these technologies is already expected, but further expansion into these markets, as well as extending its reach into other platforms, could help NVIDIA's stock continue its impressive climb.