Sonic (NASDAQ: SONC) saw its 2016 results dragged down by the malaise which impacted its entire industry.

The chain did not have an awful year, but it did not have a great one either. Instead, it suffered along with most, but not all, of its rivals fighting for customers in a very challenged operating environment. 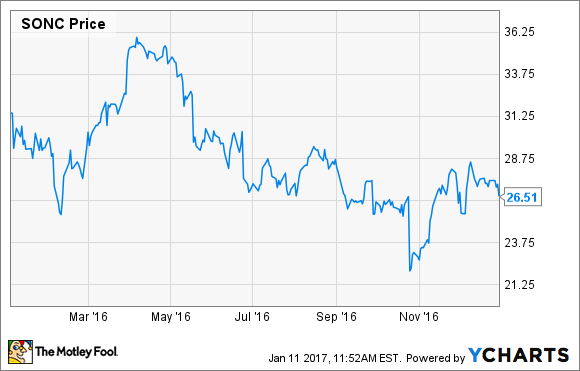 Those are decent results for this market, but the slow growth and inconsistent quarter-by-quarter numbers clearly dragged the chain's share price down over the course of the year. After opening at $31.68 to begin 2016, Sonic share closed the year at $26.51, a 16% drop, according to data from S&P Global Market Intelligence.

Like many restaurant chains, Sonic needs to show it can deliver in the new reality. This is a world where there are fewer people eating out, and more chains fighting for their dollars. CEO Cliff Hudson spoke in the company's fourth-quarter 2016 earnings release about the steps that Sonic is taking to improve, and noted that he expects the company's customer experiences to drive sales:

This, combined with a more-highly franchised system, better company drive-in margins, penetration of digital POPS units in 80% of our system, a strong development pipeline, and a significantly lower number of shares outstanding, provides a solid foundation for good sales and earnings growth over the next few years.

Sonic simply needs more sales. The company held its own in 2016, but it has to do better than that in future to convince investors it has not topped out its market.

The company seems to have a plan in place, but executing in a market choked with established and emerging new rivals makes any plan suspect. Sonic did not have a bad 2016, but nothing about its results make it obvious that 2017 will be much better, and the climate could even be more difficult.

Why Did Sonic Corp. Shares Lose 16% in 2016? @themotleyfool #stocks Next Article
Current