I have had my eye on chipmaker Skyworks Solutions (NASDAQ:SWKS) ever since its shares fell from all-time highs in the summer 2015, With U.S. markets flirting with records every day and Skyworks' shares getting left behind during the late-year stock rally, it seemed like the right time to add the chipmaker to my portfolio. So I did. 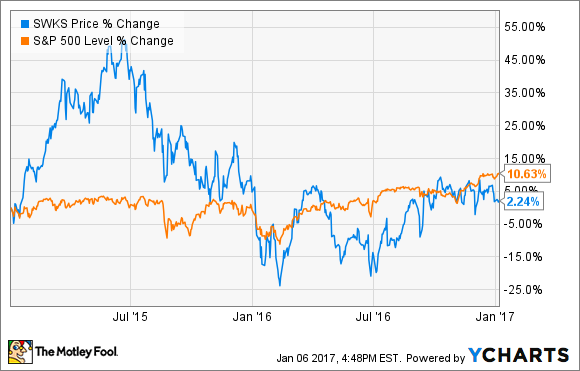 Skyworks' precipitous fall can be chalked up to a slowdown in mobile growth in the last couple of years. However, business in the semiconductor industry is starting to take a turn for the better.

Since 2015, global demand for smartphones and tablets has waned. Developed markets, especially, have contributed to the problem, as consumers have put off replacing their devices.

This has led to struggles for chipmakers, and Skyworks has been no exception. Best known for making radio-frequency chips for smartphones like the iPhone and Galaxy devices, the company's dependence on end-consumer mobile purchases have stung the top and bottom lines.

The year-and-a-half snooze has begun to show signs of dissipating, though. While quarterly revenue and profit are still off their highs, both metrics are once again on the rise. It's worth noting, though, that Skyworks' profit for the whole fiscal year that it just wrapped up mustered another record on cost-cutting initiatives. 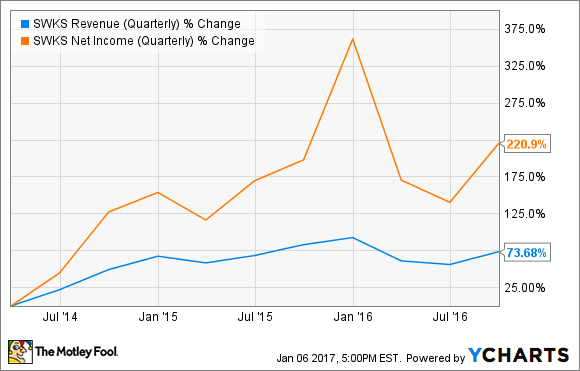 The company issued positive guidance for its first quarter, with revenue expected to be up 7% to 9% from the fourth quarter. The company also has a modest 10.7 price-to-earnings (P/E) ratio based on one-year forward estimates for profitability.

Another key metric is free cash flow, or money left over after basic expenses are paid. Free cash flow has also been on the rise as of late. 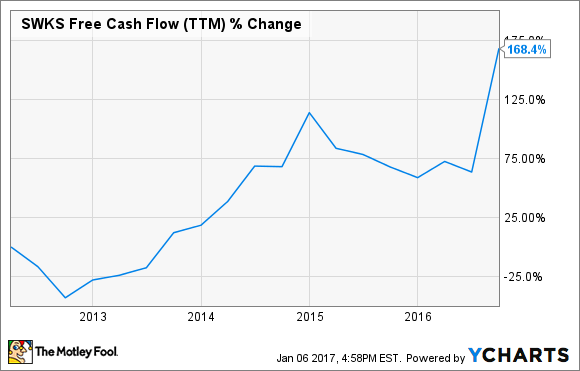 Skyworks is a quality company, but the slowdown wreaked havoc on its share price. With things starting to look up, the stock looked like too good a value to pass on.

Just as important as the cheap valuation on Skyworks is the story behind the business. The chipmaker, along with other players in the semiconductor space, is in the midst of a transition from mobile device domination to the Internet of Things (IoT). 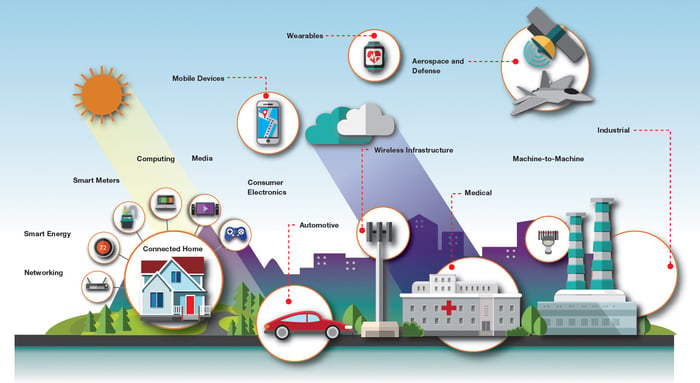 The world is moving beyond just smartphones and tablets, and a multitude of devices are getting connection-enabling equipment embedded into them. Some estimates put the number of connected devices at over 25 billion by 2020, triple the number currently estimated to be in operation. This development benefits Skyworks, as the company designs and builds product to help power those connected "things."

The company is still very much dependent on the cellphone industry. While Skyworks doesn't break down the numbers specifically, it was stated in its last annual report that Foxconn, which makes devices for companies including Apple, and Samsung, which makes the Galaxy devices, each accounted for 10% of business.

However, the recent uptick in business can be attributed to not just a rebound in cellphone sales, but new enabled connections, as well. Some of the highlights include connected autos, smartwatches and other wearables, and smart-home devices.

In it for the long haul

My timing will not go in the record books as perfect. In hindsight, this past June or July would have been better for bargain hunters such as myself, with share prices in the low-$60 range. But I'm fine with my purchase, as shares are still well off all-time highs, and the long-term potential for Skyworks is great with the IoT industry still in its early stages.