Dover Corp (NYSE:DOV) gave an investor presentation on Thursday confirming its 2016 guidance for EPS in the range of $3 to $3.05 and also initiating its 2017 outlook. It was a broadly positive, but not spotless, outlook, and investors in companies like General Electric Company (NYSE:GE) and AZZ Inc (NYSE:AZZ)  can take heart from what was said about upstream oil spending.

Focusing on the 2017 guidance from Dover Corp:

While the earnings guidance is shy of analyst consensus, it's also important to focus on management's commentary:

It's marginally positive for Dover Corp, but definitely positive for GE. On the plus side, the positive news of early-cycle oil and gas -- where Dover competes with GE -- is a reflection of the recovery in the U.S. rig count. Moreover, investors shouldn't be overly concerned with soft conditions in later-cycle markets such as automation (where GE also competes), because it usually follows a recovery in early-cycle spending. 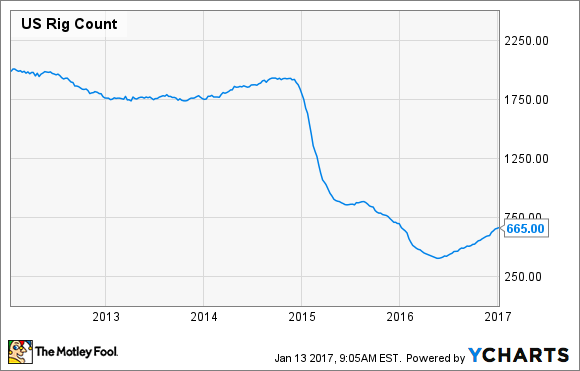 Investors might want to look at AZZ Inc, whose recent results were hit by weaker-than-expected oil and gas spending and the impact it's having on its galvanizing segment. If Dover's outlook is an accurate guide, then AZZ could eventually see a pull-through as oil producers start spending on galvanizing again, rather than merely using rigs stacked as a consequence of the slowdown. In other words, AZZ's post-earnings stock price dip could be a buying opportunity.

Turning back to Dover, on a less positive note, the difficulties in retail refrigeration -- largely due to production difficulties caused by an increase in customers -- haven't abated yet, and management's forecast for 0% to 2% growth mirrors the weak outlook given by competitors.

Looking ahead, investors will want to see Dover's energy segment hit its organic revenue growth target range of 13% to 16% for 2017 -- based on an assumption for an average U.S. rig count of 680 to 700 -- and some signs that the production difficulties in retail refrigeration are being dealt with.