Twitter (NYSE:TWTR) went public over three years ago, but the stock now trades at a 33% discount to its IPO price of $26. That decline can be attributed to its stalled out user growth, sluggish sales growth, lack of profitability, and the shortcomings of its new features. But some of that blame should also be placed on co-founder Jack Dorsey, who returned as CEO in 2015. 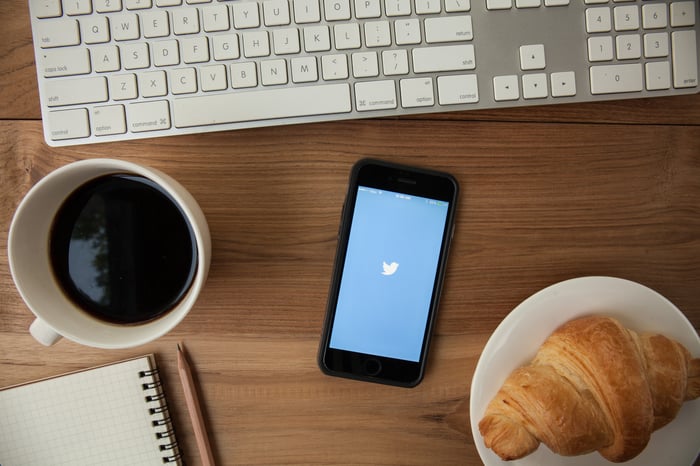 Dorsey was previously fired from that role in 2008 due to his pursuit of outside interests on company time, poor communication skills with investors, and ongoing clashes with co-founder Evan Williams. Yet Bloomberg called Dorsey's 2015 return his "Steve Jobs moment" -- noting that a more mature Dorsey might fix Twitter's problems. That clearly hasn't happened, so we should see why it might be time for Twitter to switch CEOs yet again.

Running two companies at once

My biggest issue with Dorsey is that he's the CEO of both Twitter and Square (NYSE:SQ), the online payments company he co-founded in 2009. Some of Dorsey's supporters note that Steve Jobs and Elon Musk also ran or currently run two companies at once, but both men are tough acts to follow.

Dorsey has also been doing a better job with Square than Twitter. Last year, Square improved its dashboard, invoice, and payroll services, integrated its platform with more third-party apps, and tethered smaller businesses to its ecosystem with small loans. Those strategies helped Square generate double-digit sales growth over the past four quarters while narrowing its net losses.

Meanwhile, Twitter grew its revenue by just 8% annually last quarter -- representing its slowest growth rate since its IPO. Its monthly active users (MAUs) rose just 3% to 317 million -- well below the 400 million MAUs former CEO Dick Costolo had tried to hit at the end of 2013. Dorsey's main turnaround strategy for Twitter was "Moments," a page of curated tweets which was quickly rendered irrelevant by Instagram and Snapchat Stories. Dorsey also cut jobs, killed its Vine app, and attempted to sell the company -- which were all short-sighted moves.

Those departures are clear votes of confidence against Dorsey's leadership and Twitter's future. But instead of trying to reverse that brain drain, Dorsey initiated several rounds of layoffs and told investors that those cuts could help the company achieve GAAP profitability later this year. That strategy doesn't make much sense, since letting top executives leave and downsizing the company could simply make Twitter less relevant to advertisers and mainstream users.

Lastly, Twitter faces plenty of other problems which Dorsey hasn't addressed. Twitter is a decent digital soapbox for following celebrities or brands, but it's clumsy for person-to-person communications between mainstream users.

That arguably limits its appeal compared to Facebook's (NASDAQ:FB) ecosystem. Facebook's core network lets users stay in touch with family and friends, Instagram is ideal for quick filtered photos, and WhatsApp and Messenger are seamless replacements for SMS. Twitter seems afraid of becoming too similar to Facebook, so it sticks with archaic character limits and a system of messages, hashtags, and secret symbols which confuses new users.

But at the same time, Twitter is piling on features to counter Facebook -- like live video, mobile payments, and curated stories -- without a cohesive thread to tie all those functions together. This has caused critics to repeatedly claim that the social network suffers from an "identity crisis" which throttles its growth and turns off potential buyers. Meanwhile, Dorsey has done little to address the rise of bots and fake accounts across the network, and merely taken baby steps toward combating bullies and trolls. If Twitter really wants to evolve as a social network or be acquired, it needs a CEO who can clearly define the company's niche and flush out abusive users.

I personally admire Jack Dorsey and his accomplishments at Twitter and Square. But I believe that Twitter needs a new leader -- preferably an outsider instead of another co-founder -- who can bring fresh ideas to the table. Those changes might finally help the social network break out of its rut and start growing again.