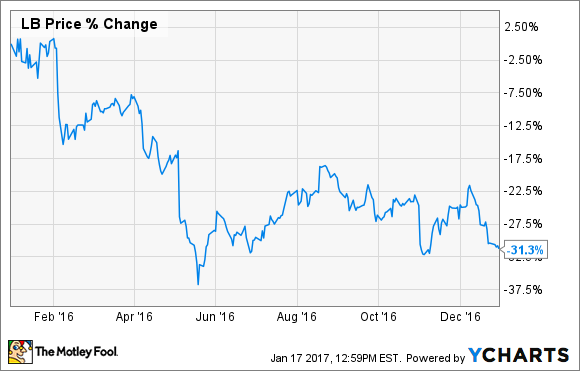 As the chart above shows, last year's drop owes primarily to disappointing results in the company's first two earnings reports of the year. The stock dropped 15% over the three days following its fourth-quarter sales report last February as it posted a surprised decline in January comps. Its overall performance was strong as comparable store sales increased 6% in the quarter, however, comps fell 2% in January, which the company blamed on a shift in timing of its semi-annual sale, which moved to December. Without it, comps would have increased 1% in the first month of year. L Brands, which also owns Bath & Body Works, La Senza, PINK and Henri Bendel, topped its earnings guidance, but the market punished it nonetheless as its momentum slowed.

Those fears appeared to be justified. The company again disappointed the market in May when its April comparable-sales report fell short. It said comparable sales increased just 1%, well below the analyst consensus at 4.8%.

Though the company beat earnings estimates in each of its last four quarters, the stock never recovered from this early shortfalls.

We're barely into the new year, but L Brands' losing ways have continued. The stock is down more than 6% as it slid after reporting holiday-season sales as comparable sales fell 1% during the five weeks ended Dec. 31, and the company expects earnings per share to come in at the lower end of its previously stated guidance range of $1.85-$2.00.

The news tracks with downbeat reports from department stores and other mall-based chains, but despite those headwinds, I'd expect 2017 to be kinder to L Brands stock. The company's valuation has compressed from a year ago, and it still has a strong brand and a solid e-commerce business, unlike many of its brick-and-mortar competitors. Shares could easily bounce back with a little momentum.