Last year was a truly awful one for investors in Halcon Resources (NYSE:HK) after its stock dropped an excruciating 99.4%: 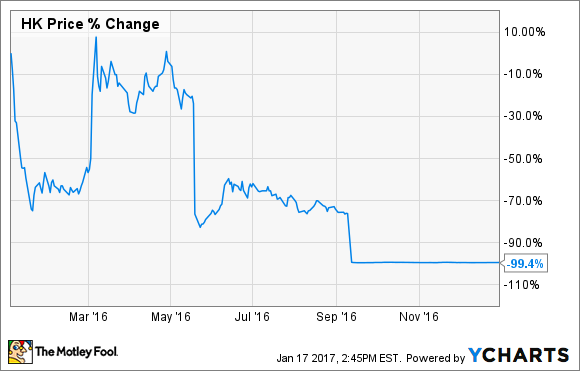 However, as bad as that was, it could have been worse. That is because equity investors actually survived the company's bankruptcy restructuring, which is a rare occurrence. While they had to give up 96% of the company to debt holders, they at least do get to keep a tiny sliver of the company in hopes of recovering some of their investment as it starts the rebuilding process. Furthermore, given that the newly restructured company eliminated most of its debt, the downside appears limited.

Tumbling over the cliff

Halcon Resources entered 2016 drowning in debt even after reducing net debt by more than $1 billion in 2015. Because of that, the company proactively engaged in discussions on a variety of options to strengthen its balance sheet and eventually hired financial and legal advisors to help it craft a comprehensive balance sheet restructuring. One of the unique features of the plan was that existing common equity holders would receive a stake in the restructured entity as opposed to having their shares canceled, which is most common in a bankruptcy restructuring.

Halcon's creditors signed on to the agreement in early June, and the company completed the restructuring and exited prepackaged bankruptcy just three months later. The restructuring eliminated $1.8 billion of its debt along with $200 million of annual interest expenses. While the new Halcon still has $1.1 billion of debt, that is a much more appropriate level for a company of its size in the current market environment.

Because of its dire financial situation, Halcon Resources did not accomplish much else last year. It only had the money to run one drilling rig, which could not drill enough new wells to offset the natural production decline from its legacy wells. As a result, production fell from 2015's average of 41,542 barrels of oil equivalent per day (BOE/d) to 34,185 BOE/d by the third quarter of last year.

Slowly getting back up on its feet

With its financials back on sustainable footing, Halcon Resources plans to go back to work drilling more new wells this year. The company set its capex budget at $200 million, which will roughly match expected cash flow at current oil and gas prices. This budget will provide enough money to restart its drilling program in the Eagle Ford shale early this year and add a second rig in the Bakken during the second quarter. These rigs should boost production up to a range of 39,000 to 41,000 BOE/d this year, which at the midpoint is up 8% from last year's average.

While that is a solid growth rate for a company of its size in the current market environment, it is below what others expect to achieve this year. For example, similarly sized Bakken shale rival Oasis Petroleum (NYSE:OAS) sees mid-teens compound annual production growth through 2018 off its roughly 50,000 BOE/d base. One reason Oasis Petroleum can grow faster is that its costs are much lower thanks to its extensive midstream network and oil-field service business. Meanwhile, Eagle Ford shale-focused Carrizo Oil & Gas (NASDAQ:CRZO) has yet to put out 2017 guidance, though it does plan to add another rig this year, which "should position [it] to deliver strong production growth in 2017 and beyond." That implies faster growth than last year when Carrizo Oil & Gas' third-quarter output, for example, was up 13% year over year to 40,762 BOE/d while the company projected that oil production would increase 10% for the year.

One of the reasons Oasis Petroleum and Carrizo Oil & Gas will grow faster this year is that they spent all last year focused on driving down costs and improving drilling returns while Halcon just tried to survive. That put it behind these rivals, though it does suggest that the company's 2017 growth plan could have upside potential should it drive down costs and improve productivity.

With the bankruptcy restructuring in the rearview mirror, the worst appears to be over at Halcon Resources. The company can now get back to drilling oil wells, though this time it intends to grow within cash flow instead of using debt to fuel growth. That said, its cost structure still appears to be higher than those of similarly sized rivals, meaning it has more work to do this year before it can compete at their level.

Halcon Resources Corporation's Stock Nearly Got Obliterated in 2016, but the Worst May Be Over @themotleyfool #stocks $HK $OAS $CRZO Next Article
Current