Diversified industrial Illinois Tool Works (NYSE:ITW) is acquiring a reputation for underpromising and overdelivering, and the latest fourth-quarter results only served to strengthen it. Its peer 3M Co. recently affirmed full-year 2017 guidance, and Illinois Tool Works did the same. Despite the excitement around what Donald Trump's election victory could mean for U.S. industrial output, management claimed its segments remained pretty much on track -- which suggests there might be some upside to current guidance. Let's take a look at another solid quarter, and how the company is set for 2017.

Starting with the headline numbers for the fourth quarter:

In short, a pretty good quarter, and the company continued to expand operating margin despite moderately growing end markets. Turning to the full-year guidance, management merely reiterated the outlook given at its investor day presentation in December:

A pretty solid quarter of execution, and as you can see below, the full-year operating margin of 22.5% continues the company's excellent history of margin expansion. 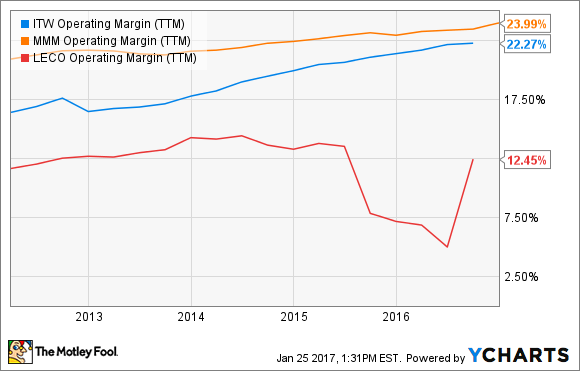 Given the improvement in industrial markets noted by other companies in the current earnings season, analysts felt obliged to pepper Illinois Tool Works' management with questions relating to why the guidance range wasn't increased. It's a legitimate question because in the investor day presentation, management claimed that its guidance didn't include any assumption for a bounce in industrial or oil and gas markets (the troubled welding segment has heavy exposure to the latter).

Management's replies alluded to its plans being made based on the trends it was currently seeing. Moreover, they pointed out that the ongoing margin expansion is largely a consequence of internal actions taken that they call  "enterprise initiatives" -- all the more attractive because margin expansion is not reliant on end-market growth.

Indeed, operating margin expanded 110 basis points (where 100 basis points equals 1%) in the fourth quarter, with enterprise initiatives contributing 130. In fact, if it hadn't been for the impact of the acquisition of EF&C, an engineering, fasteners and components business in the automotive sector, overall margin would have risen 150 basis points. As you can see below, all seven segments generated organic operating margin expansion and five of the seven generated revenue growth in the fourth quarter.

The strength in automotive OEM (original equipment manufacturing) is of particular note because it was stronger than auto builds in each reported region. For example, North America was up 2% compared to auto builds up 1%, Europe was up 8% compared to a 3% increase in auto builds, and China was up 33% compared to a 15% increase in builds. In other words, Illinois Tool Works is demonstrating it can outgrow its end markets. It's notable because some analysts are worried that global auto builds are set to plateau and possibly fall in 2017. 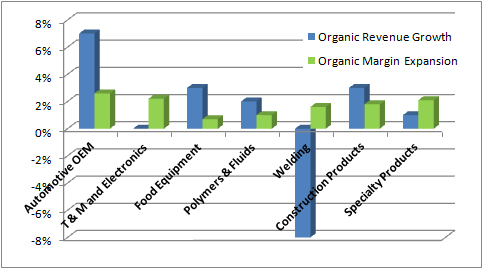 All told, it was a good quarter for the company. Margin expansion is ongoing, and if the company can get some help from end markets, its management may yet raise earnings forecasts in the future. Recent industrial data has been encouraging, and there are early indications of oil-and-gas capital spending recovering, and if this translates into meaningful end-market improvement, then Illinois Tool Works' underlying margin expansion will bear fruit.

Meanwhile, the company continues to quietly beat expectations and investors continue to be rewarded, even as they wait for better end-market conditions.