One of the largest aerospace and Boeing Co. (NYSE:BA) suppliers, Rockwell Collins, Inc. (NYSE:COL), has released its first-quarter earnings and discussed its outlook for the aviation market in 2017. Let's take a look at what was said and what it means to the aviation industry and for Boeing.

Management maintained the guidance it gave in October, so no surprises there. That's all well and good, but in reality Rockwell Collins' near- to mid-term outlook will be heavily influenced by its pending acquisition of B/E Aerospace Inc. (NASDAQ:BEAV), a maker of aircraft seating and cabin interiors. Since the guidance doesn't include any assumptions regarding B/E Aerospace, the new outlook doesn't say much that investors don't already know about Rockwell Collins.

Aside from the inherent uncertainty with the acquisition, there's also likely to be some competitive changes now that key rival Zodiac Aerospace has been bid for by fellow French company Safran.

Bridging the gap between production of the 777 and the 777X is a key priority for Boeing Co. Image source: Boeing Co.

Turning to the industry outlook, CEO Kelly Ortberg remarked that the troubled business-jet market -- a highly cyclical industry affected heavily by business confidence -- "hasn't got any worse" but also hasn't started "to turn" as yet. However, he pointed out that customers are "generally reporting a pretty good fourth quarter" in contrast to last year. In other words, the underlying conditions are there for a business aviation recovery, and if President Trump spurs economic growth, then a turnaround could come.

However, the nuance in Ortberg's outlook for the commercial aerospace cycle will greatly interest Boeing and aviation customers. 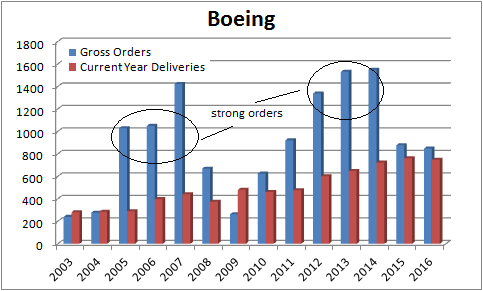 Otberg's business-jet outlook isn't much of a surprise. It's a cyclical industry, and clearly the economy needs to see more growth before business confidence grows enough to encourage new business-jet orders.

However, the commercial-jet outlook is interesting, because it creates mixed conclusions as the narrow-body aircraft market is set to do better than the wide-body market.

On one hand, it's positive that Otberg sees sustained growth in deliveries and strength in the narrow-body aircraft market. This comes as Boeing's orders appeared to have peaked in 2014 (see the preceding chart) and as the International Air Transport Association (IATA) forecasts that global airline net-tax profits will fall to $29.8 billion in 2017 from $35.6 billion in 2016. 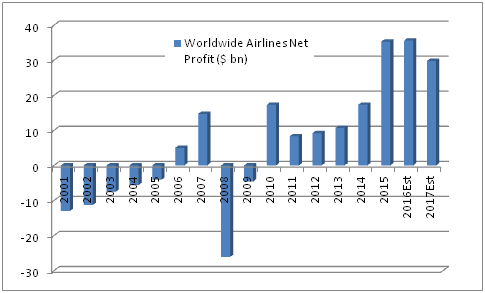 On the other hand, Otberg's commentary with regard to continued softness in the wide-body aircgraft market would put some more pressure on Boeing if it proves to be accurate. Boeing is facing a challenge as it tries to bridge the gap between production of the 777 and the 777X.

Boeing generated just 17 net orders for the 777 aircraft in 2016, forcing the company to cut to production on the 777 to five a month in August 2017, down from a rate of 8.3 a month in 2016. Given that the 777 is a highly cash-generative aircraft for Boeing, and the 777X faces increased start-up production costs, any further pressure on 777 sales could create challenges, not least for Boeing's plans to increase cash flows in the coming years.

All told, Rockwell Collins' company-specific outlook is positive, but its year will largely be defined by how events unfold with B/E Aerospace. Meanwhile, the industry outlook is broadly positive but contains some question marks for Boeing. The aviation giant releases its earnings Jan. 25, and investors would be well advised to listen for analyst questions on 777 production and whether Boeing can grow cash flow as it prepares for the debut of the 777X in 2020.