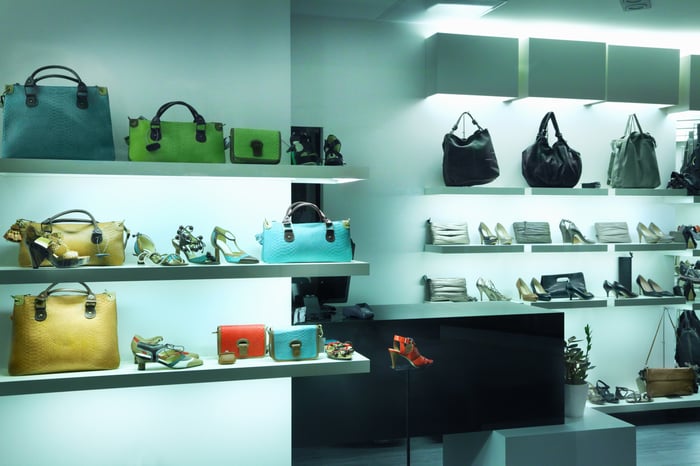 Heading into its holiday-season earnings report, investors were cautiously optimistic that luxury retailer Coach (NYSE:TPR) would show progress in its turnaround plan despite weak demand trends in the broader industry. The company this week delivered on that promise, as sales and profit growth in the second quarter of its fiscal year kept it right on track to meet management's full-year targets.

Here's a look at how the numbers compared to the prior-year period.

Sales growth sped up to a 4% pace from 1% in the prior quarter as the negative impact from a planned pullback in the U.S. wholesale business lessened. Pricing discipline and cost cuts, meanwhile, helped power surging profits.

"We are both pleased and proud of our performance this holiday season, particularly in light of the challenging and volatile global retail environment," CEO Victor Luis said in a press release. "Our team delivered top-line growth in each of our reportable segments," Luis continued, "highlighted by positive comparable store sales in North America and overall gross margin expansion."

Luis mentioned a few other positive trends Coach noticed over the holidays: "We were also thrilled with Stuart Weitzman's results this quarter ... We advanced our leadership position in fashion boots and booties during the key winter selling season, while driving global awareness and brand relevance through impactful marketing and the launch of key global flagships alongside the Coach brand openings on Fifth Avenue in New York and Regent Street in London."

Coach lowered its full-year outlook slightly, but only to account for a surprise shift in exchange rates. The company had expected reported sales to benefit by roughly a full percentage point from currency effects, but now it sees exchange rates hurting sales by nearly the same amount. As a result, revenue will likely rise by around 3% rather than 5%. The operating margin target held steady at 19% of sales, a solid improvement over 2016's result.

These forecasts don't imply robust growth, but are more consistent with a generally tough retailing environment. But the targets do show progress toward Coach's brand reboot goals. At the same time, investors can breathe a sigh of relief that the company emerged from a difficult holiday shopping season with sales growth intact and with earnings still on track to rise by double digits for the year.