Royal Gold, Inc (NASDAQ:RGLD) is set to report fiscal second-quarter earnings on February 3rd. It should be generally good reading for investors; however, some key numbers at this gold and silver streaming company won't be as good as those of the first quarter, or even the year-ago period. While the top and bottom lines will get the big headlines, you'll also want to pay attention to the changes taking place underneath. Here's what to watch:

In 2015, Royal Gold inked deals with then-struggling miners Barrick Gold (NYSE:GOLD) and Teck Resources (NYSE:TECK) worth a combined $1.1 billion (or so). Needless to say, it was a very active year for Royal Gold. Last year, though, the most notable transaction was the streaming company supporting Centerra Gold's (OTC:CAGDF) acquisition of Thompson Creek Metals Company, placing the important Mount Milligan Mine in stronger financial hands.

Backing the Centerra deal was important, but it wasn't really a growth-oriented move -- it was a workout situation that helped preserve the value of Royal Gold's investment in the Mount Milligan mine. That's why the moves made in 2015 and 2016 have important implications for Royal Gold investors. 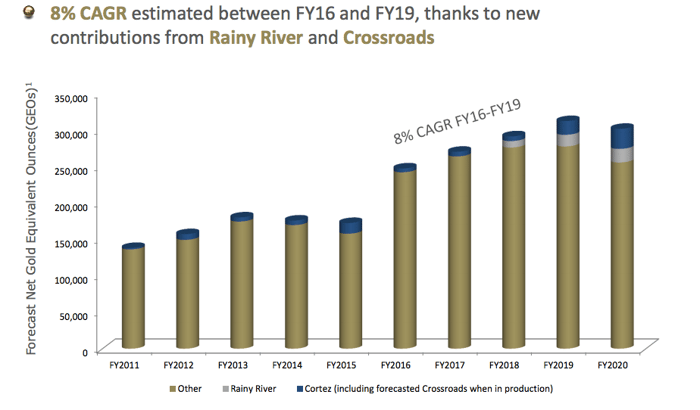 For example, the company has already reported that it sold 53,000 ounces of gold in the fiscal second quarter. That's down from 60,000 in the first quarter. In the year-ago period, Royal Gold sold 61,600 ounces of gold. You can see the gold trend moving lower -- note that the workout at Mount Milligan involved reducing the company's gold stream.

Although Royal Gold didn't break out its silver sales a year ago (it didn't have as much exposure at that point), the first two quarters of 2016 show some promise on this side of the business. In the fiscal first quarter, the streaming company sold 323,000 silver ounces, ramping that up to 543,000 ounces in the second quarter.

The end result is likely to be a solid overall number for gold equivalent ounce sales, which puts gold and silver on an equal footing. But it doesn't mean you should ignore the declining gold number. It's not something to be too upset about yet, but be sure to listen closely to management's comments around production results and the changing shape of its portfolio. 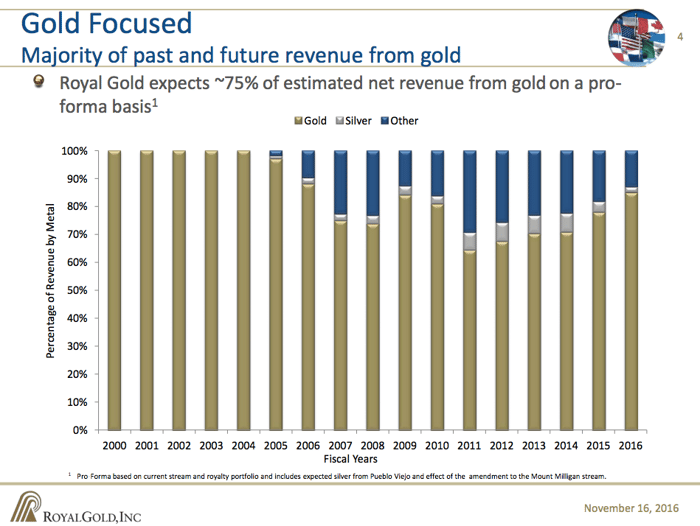 The ups and downs

With the big deals of 2015 over a year old at this point, investors shouldn't be surprised to see the trajectory of the company's gold and silver results start to level off after a huge one-year jump in 2016. However, Royal Gold sells often-volatile precious metals. Commodity prices will have a bigger impact on the top and bottom lines as the volume growth of silver and gold sales slows.

For example, the company's average gold price was $1,226 per ounce in the fiscal second quarter, down from $1,329 in the first quarter. However, that is up from the year-ago period, when the company only got $1,094 per ounce of gold. The real takeaway here, though, is the often-swift changes that can take place. Silver prices fell sequentially, too, going from $19.52 per ounce in the fiscal first quarter to $17.51 in the second quarter.

The company's costs have also inched higher, with its average cost of sales increasing around 6% to $373 per gold equivalent ounce. That's still pretty cheap, proving the strength of the company's low-cost model. However, it is higher than it was in the first quarter, meaning margins will likely contract on top of lower sales prices. With low costs effectively locked in by its contracts, you shouldn't have to worry too much about this issue, but don't ignore it, either.

Royal Gold used the commodity downturn to ink some big gold and silver streaming deals. However, the only major transaction in 2016 was a workout deal that put a key mine into stronger financial hands. This suggests that growth will be relatively muted.

So, when the company reports earnings in a few days, don't expect big sequential changes in the company's gold equivalent sales numbers. Equally important, remember that commodity prices and streaming costs will have a larger impact on Royal Gold's financial results in the absence of material volume growth. That's not bad, per se, so long as you don't have elevated expectations based on what happened between 2015 and 2016.