Just a few weeks ago, I named JetBlue Airways (NASDAQ:JBLU) as my top stock pick for 2017. However, the popular discount carrier hasn't had an auspicious start to the year. JetBlue shares have already fallen about 14% since the beginning of 2017. 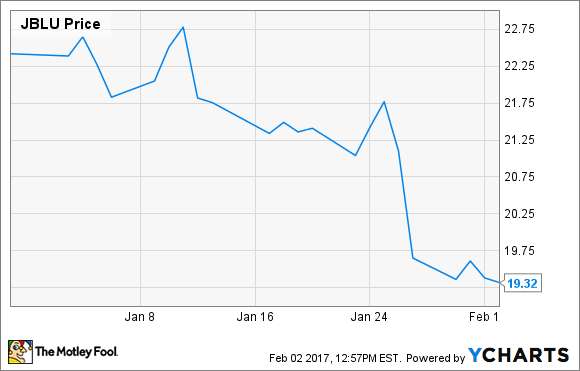 Nevertheless, I continue to believe that JetBlue has a bright future, thanks to several upcoming revenue and cost improvement drivers. JetBlue is likely to return to strong profit growth by the end of this year, which could get the stock back on track -- and there's plenty of room for future gains.

JetBlue stock's poor performance over the past few weeks was driven primarily by the company's weak revenue outlook. On JetBlue's Q4 earnings call, management stated that revenue per available seat mile (RASM) was likely to plunge 8% to 9% in January.

Results for the rest of the quarter should be better, but JetBlue is still likely to post a mid-single-digit RASM decline for the full quarter. By contrast, top domestic carrier Southwest Airlines (NYSE:LUV) has forecast that its RASM will decline no more than 1% in the first quarter.

Southwest's solid outlook has led analysts to modestly increase their Q1 earnings per share (EPS) estimates for the company in the past month. During the same period, the average Q1 EPS estimate for JetBlue has plunged from $0.43 to $0.30. As a result, investors have dumped JetBlue shares and piled into Southwest Airlines stock.

JetBlue's underperformance is related to a confluence of several factors. First, it has a much larger presence in Latin America and the Caribbean than Southwest, so it has been hit hard by weak demand in Puerto Rico and Colombia. Second, JetBlue was disproportionately impacted by a blizzard that boosted its January unit revenue in 2016, creating a tough comparison for this year. Third, JetBlue has started a lot of new routes recently, weighing on RASM.

From a long-term perspective, JetBlue's current unit revenue weakness isn't cause for concern. Some of the headwinds it faces right now are temporary. For example, JetBlue plans to cut some capacity in Puerto Rico and Colombia to bolster its unit revenue results there. Furthermore, its new routes should mature over the next year or two, driving RASM higher.

In the long run, the expansion of JetBlue's Mint premium service will represent a bigger unit revenue tailwind. Since 2014, JetBlue has been flying Airbus A321s featuring a premium cabin with 16 lie-flat seats on its transcontinental routes from New York to Los Angeles and San Francisco. Up until then, JetBlue had always used an all-coach configuration.

JetBlue has been able to capture very high fares for customers traveling in the Mint cabin. It has also seen a somewhat surprising increase in the average coach fare, as customers have responded positively to its decision to offer more frequent flights on Mint routes.

The result has been double-digit unit revenue growth on the New York-Los Angeles and New York-San Francisco routes. The new Mint routes in Boston are heading in the same direction. As JetBlue moves through the current round of Mint expansion -- most of which will take place in late 2017 and 2018 -- its RASM could return to strong growth.

Cost improvements are coming, too

While investors are mainly disappointed about JetBlue's revenue trends, some analysts have also expressed concern that the company's unit costs continue to rise. JetBlue has projected that its non-fuel cost per available seat mile (CASM) will rise 1% to 3% in 2017 despite its relatively high capacity growth, which should help reduce unit costs.

However, JetBlue expects non-fuel CASM growth to slow to a 0% to 1% compound annual growth rate between 2018 and 2020. It will benefit from several cost tailwinds during that period. First, JetBlue recently began a multiyear effort to reduce its structural costs by $250 million to $300 million. That includes things like using its scale to renegotiate supplier contracts and boosting employee productivity.

Second, JetBlue will begin adding 12 seats to each of its 130 A320 aircraft this fall. This project will run through 2020. It will mitigate unit cost pressure by spreading relatively fixed costs (like pilot and maintenance labor, depreciation, and spare parts) over more seats.

Third, JetBlue will add 44 A321 and A321neo aircraft to its fleet between 2018 and 2020. Many of these planes are likely to be set up with a high-density 200-seat configuration; others could receive a Mint-style cabin and be used to start service from New York and Boston to Europe. Either way, the result should be a reduction in JetBlue's unit costs.

Right now, Southwest Airlines stock trades for nearly 14 times forward earnings, compared to less than 11 times forward earnings for JetBlue. Yet JetBlue clearly has much larger growth opportunities, if for no other reason than because it is a third of Southwest's size. Additionally, its 2017 earnings may be somewhat depressed due to short-term headwinds in a few markets.

JetBlue's unit revenue is likely to return to growth later this year and could accelerate next year as the company begins to reap the benefit of its upcoming Mint expansion effort. Meanwhile, unit cost increases should slow considerably. This gives JetBlue huge earnings growth potential in the coming years, which could lift its stock to new heights.