Altria Group (NYSE:MO) has been one of the best-performing stocks of all time, and the tobacco giant shows few signs of slowing down anytime soon. But some investors worry that the company has seen its debt levels climb precipitously over the past decade, and that could leave Altria exposed to higher interest costs if rates start to rise more substantially in the future.

Is Altria really in danger because of its debt? Below, we'll take a closer look at Altria's balance sheet to see the trends in its debt over the past several years and whether it looks problematic for the future.

Altria currently has $13.9 billion in long-term debt as of the end of 2016. That represents about 30% of Altria's total assets, and the tobacco company's debt-to-equity ratio is 1.09 based on its most recent figures.

When you look at the history that Altria has had with its debt over the past 10 years or so, you can see a definitive upward trend. The current level of debt isn't the highest that Altria has reported in recent years, but it is, nevertheless, toward the upper end of the spectrum. 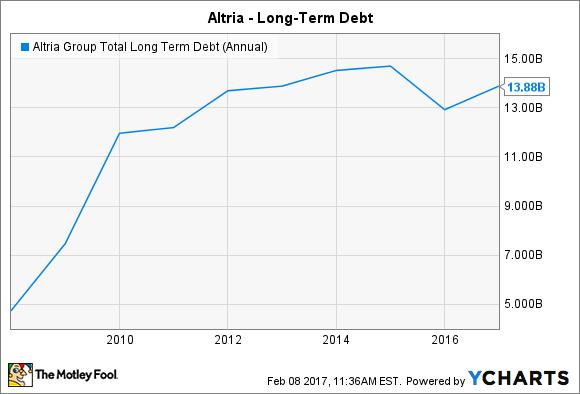 More specifically, Altria's debt comes in many different flavors. The company provides details only on an annual basis, but according to its most recent annual report, the company had debt with interest payments ranging from 2.625% to 10.2%, with maturities going out all the way to 2044. Roughly $1 billion of that debt will mature each year from 2018 to 2020, with $1.5 billion set to mature in 2021 and the remainder with maturities further out into the future.

How Altria is managing its debt

Yet Altria has already recognized the potential danger of its debt and has taken steps to mitigate its negative effects going forward. For instance, in September 2016, Altria issued a total of $2 billion in 10-year and 30-year unsecured bonds. The bonds carried coupon rates of 2.625% and 3.875%, respectively, locking in historically low rates for a long period of time. Altria could have chosen cheaper financing options by issuing short-term notes, but the company clearly identified that the bigger risk was having to refinance those short-term notes several years from now at interest rates that could be substantially higher than the amount it would have to pay on currently issued long-term debt.

In addition, Altria has bought back higher-rate debt as part of more extensive refinancing options. For instance, during the same quarter in which it issued its new debt, Altria did a debt tender offer to retire $933 million in potential future principal amounts. Those bonds had maturities of 22 to 23 years and carried interest rates in the 10% range, and Altria had to pay a big premium to retire them early. Yet going forward, the reduction in interest payments by replacing 10% coupon debt with 3% to 4% coupon debt will be considerable.

The net impact of these moves has been to help keep interest expenses falling despite stable-to-rising levels of debt. 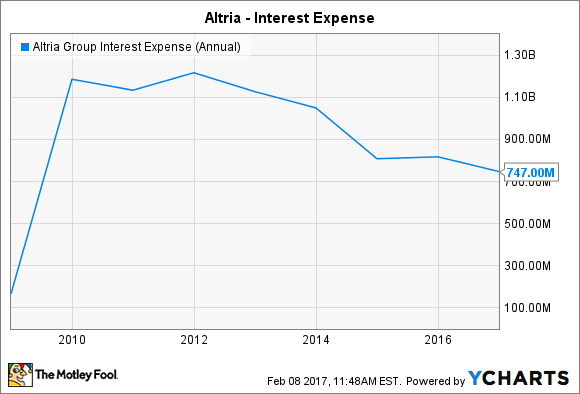 Admittedly, that recent downward trend won't continue forever. Altria has only so much high-coupon debt left, and once it's gone, the company will be more fully exposed to the risk of rising rates in the future.

Why Altria will survive rising rates

Still, Altria's preparations should be adequate to give it time to deal with rising rates. Weighted-average coupon rates in the 5% to 6% range give Altria flexibility in restructuring any maturing debt, and decisions to tap the credit markets with long-term debt has done much to lock in low rates for the maximum possible time. That should make future rises in interest expense much more gradual than they would be if Altria relied entirely on short-term debt.

Leverage can be an enemy for companies, but Altria appears to be using its debt responsibly. By taking advantage of favorable conditions when they've arisen, Altria has done a good job of heading off any adverse consequences from rising debt levels on its balance sheet.