Despite Gilead Sciences' (NASDAQ:GILD) shockingly bad 2017 financial outlook, the company's stock is still trading at the absolute lowest valuation within the realm of large-cap biotech stocks and has done so for quite some time now.

Now, Gilead's rock bottom valuation is largely assumed to be the result of the stiff headwinds facing its hepatitis C franchise right now. After all, Gilead itself is forecasting a nearly 40% drop in hepatitis C sales in 2017, which is markedly worse than even what the Street was forecasting heading into the company's Q4 earnings.

But there's a lot more going on with Gilead's seemingly oddball valuation than meets the eye. Let's dig deeper to find out what the market is really saying about this top biotech company. 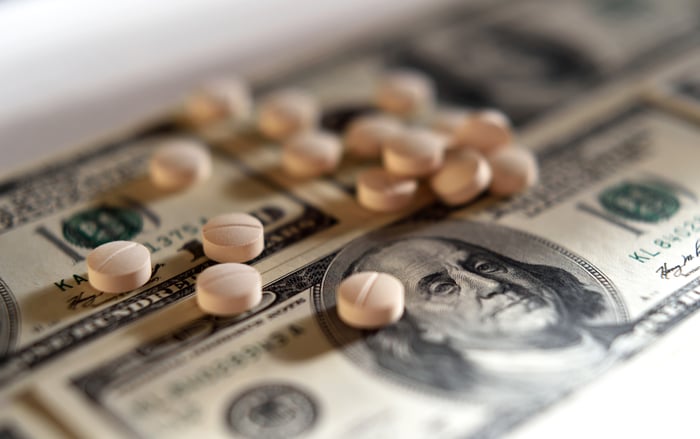 The numbers are in: Gilead Sciences is dirt cheap

Right now, Gilead is trading at under 3 times its 2016 revenue haul (price-to-sales ratio), which is well below its closest peers.

Apart from its hep C fiasco, Gilead has an exceptionally strong cash position, a well-rounded product portfolio, and a proven track record of developing game-changing medicines. The point is that Gilead simply isn't being given the benefit of the doubt, and that suggests the market thinks the biotech's problems actually go deeper than its faltering hep C sales.

Digging into the details, overall spending on hepatitis C is forecast to drop by around 65% over the course of 2017 to 2019 relative to 2016 levels, according to Express Scripts' (NASDAQ:ESRX) newly released 2016 Drug Trend Report.   While it would be reasonable to assume that Gilead's own slice of the pie would shrink in tandem, these estimates appear to be on the conservative side based on Gilead's own worrisome forecast for 2017.

While declining hepatitis C drug sales certainly aren't welcome news, Express Scripts' forecasts imply that the biotech's other assets -- especially those in HIV -- should grow quickly enough to essentially blunt a fair amount of this hep C nosedive over the next few years.

I won't bog you down with the details, but the quick and dirty takeaway is that this simulation suggests that Gilead's 2019 revenues should range from $25 billion to $29 billion -- even with a 70% decline in hep C sales from 2016 levels. This estimate also assumes that the drugmaker won't grab any major regulatory approvals outside of HIV or engage in any sizable M&A activity over the next three years.

If my estimates are correct, Gilead is probably trading at around 3.0 to 3.5 times its 2019 revenues, which, again, is well below industry norms. To be fair, the Street is forecasting Gilead's 2019 revenue to come in a tad lower at $24.78 billion, which appears to reflect the biotech's quicker-than-expected hep C decline in 2017. Regardless of the minor difference between these revenue estimates, though, Gilead's stock is arguably grossly undervalued at current levels.

So what's going on? If we make one critical modification to this simulation regarding the biotech's HIV franchise (assuming flat growth over the next three years), the market's current valuation starts to make more sense.

Cutting to the chase, the market seems to believe that Gilead's HIV revenues will basically stagnate over the next three years -- presumably as the result of greater competition from Pfizer, GlaxoSmithKline, and Japanese drugmaker Shionogi's ViiV healthcare unit, along with rising generic competition for older drugs like Atripla.

The bottom line is that Gilead's HIV revenues must flatline in order for the company's 2019 price-to-sales ratio to even come close to the industry norm of 5 -- that is, unless its hep C sales completely fall off the map.

The market's distaste for Gilead's shares appears to be the result of its belief that the company will experience both a steep decline in hep C sales and a far more competitive HIV landscape moving forward. As one possible alternative explanation, the hep C market would basically need to collapse within the next year or so for the biotech's rock bottom valuation to make a lick of sense.

Even if the worst does come to pass, though, Gilead has more than enough financial firepower to buy additional revenue if need be. Specifically, the company ended 2016 with over $32 billion in cash, cash equivalents, and marketable securities. And eventually, Gilead should get back to its winning ways on the clinical front with several key data readouts coming in the next two to three years.

So while Gilead's 2017 financial outlook is indeed dreadful, bargain-hunters may want to start snapping up shares on any additional weakness. Gilead, after all, did see a healthy 17% rise in HIV and other antiviral sales outside of hep C last year -- a fact that seems to have gotten lost amid the din, and a figure that runs counter to the market's skeptical outlook.