Shares of construction materials leader Eagle Materials (NYSE:EXP) set new all-time highs earlier this year, although the stock's recent surge was catalyzed by the announcement of fiscal second-quarter 2017 results in late October. At the time, the company set record revenues and more than doubled earnings per share from the prior-year period. That was followed by a new high watermark for quarterly sales in the fiscal third quarter of 2017, which ended in December, marking the third consecutive quarter in which record revenue was established.

Considering the impressive backstory, it's not surprising that Eagle Materials stock soared 60% in 2016. What may be surprising is that the stock still looks cheap. Moreover, management has demonstrated a consistent track record in delivering value to shareholders over the long term through its focus on growth from acquisitions and improving operational efficiency. Continuing that long-standing strategy bodes well for success in 2017 and beyond. 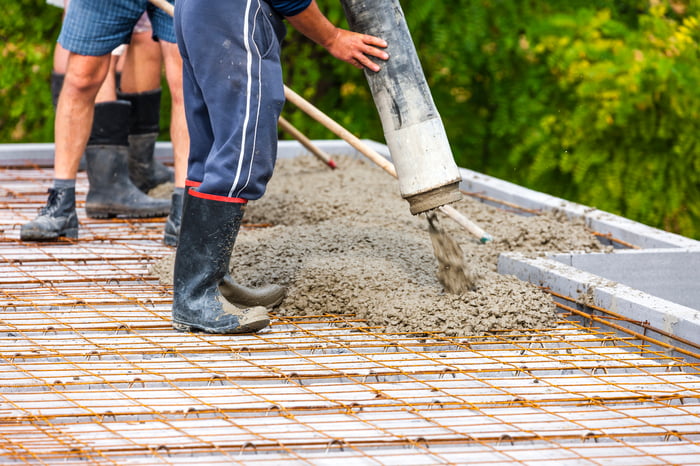 Why the stock should continue heading higher

Eagle Materials reports three operating segments: (1) cement, concrete, and aggregates; (2) gypsum wallboard and paperboard; and (3) oil and gas proppants. The first two are the most significant contributors to the company's top and bottom lines, comprising nearly 95% of revenue. The proppant business is relatively new and has suffered alongside the domestic oil and gas drilling, although management continues to believe in the segment's long-term value potential.

That said, the company's bread and butter are clearly construction-related products. It boasts 5 million metric tons of annual cement production capacity, which will soon increase 20% to 6 million metric tons annually once a recently announced $400 million acquisition closes. Eagle Materials also owns an impressive portfolio of ready-mix concrete facilities and aggregate quarries, and is currently the country's fifth-largest producer of wallboard.

It wasn't always this way. Management has grown revenue with a flurry of strategic acquisitions since 2012 -- just as the company's business began to recover from the Great Recession. The results have been explosive growth in several important financial metrics and the stock price. 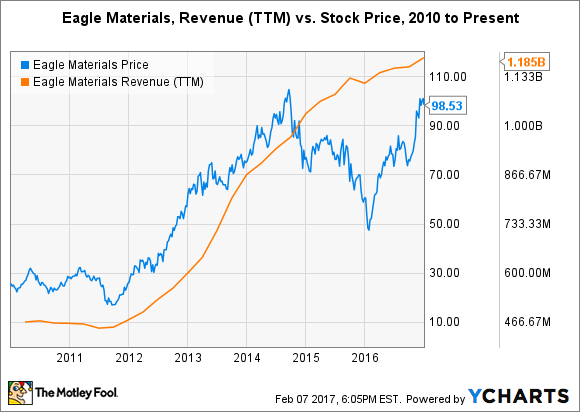 As the recent $400 million purchase of a new cement facility demonstrates, management has no intention of stopping its strategy. And why should it? Revenue, profits, and operating cash flow have achieved sustained incredible growth in the last several years. But despite the company's soaring stock price, it's actually trading at historically cheap levels. Eagle Materials stock now trades at just one-third of the trailing earnings ratio compared to five years ago, while operating cash flow has increased by a factor of five in the same time span. 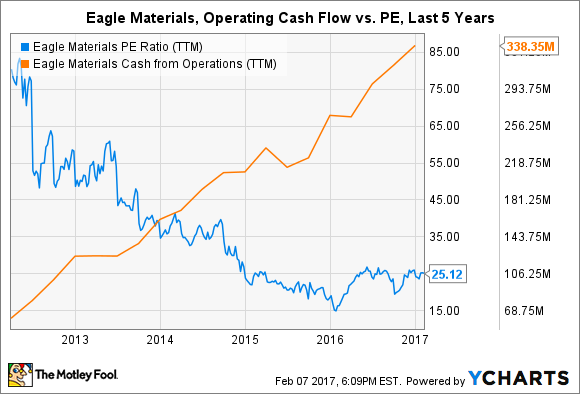 If the trend continues, then there's no reason to think the stock is finished setting all-time highs.

What could bring the stock down?

As always, no investment opportunity is without risks. While there's a solid case to be made for owning the stock, the single biggest risk for Eagle Materials shareholders is the cyclical nature of the industry. Past slowdowns in construction projects from recessions, which occur every decade or so, had devastating consequences for the company's operating cash flow and share price. Consider the following chart displaying both metrics dating back to 1995. 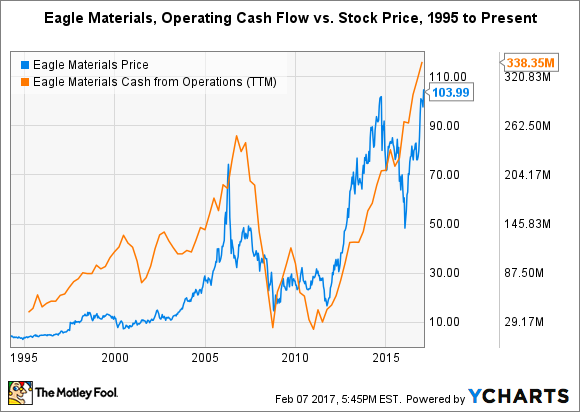 Eagle Materials encountered challenging times in lock step with the broader economy, as evidenced by severe drops in operating cash flow in 2001 and 2008. It's worth noting the company has never sunk to negative operating cash flow, but the stock still suffered from volatility during brief periods of economic malaise. Of course, investors who stuck to a buy-and-hold investing strategy have enjoyed easy returns over the years, but the risk posed by recessions is something to keep in mind nonetheless.

The construction materials supplier turned in a solid 2016 campaign for investors and has established new all-time highs in the first few weeks of this year. Another giant acquisition will boost cement production capacity by 20%, which should allow revenue, profits, and operating cash flow to continue to trend higher for the next several years (barring a downturn in construction activity, that is). Simply put, Eagle Materials stock still looks cheap -- and you may want to give it a closer look.