Insurance stocks can be a good way to get dividends and growth in your portfolio, and there are many insurers trading at particularly attractive valuations right now. Good insurance stocks are stable, low-risk, and can actually prosper as interest rates rise. With that in mind, here are three attractive insurers you can buy right now:

MetLife (NYSE:MET) is the largest U.S. life insurer, with one of the strongest brand names in the insurance industry and an excellent distribution network. The company has a variety of life insurance offerings, and about one-third of its earnings come from Latin America, Asia, and other foreign markets, which are expected to be big drivers of growth going forward. 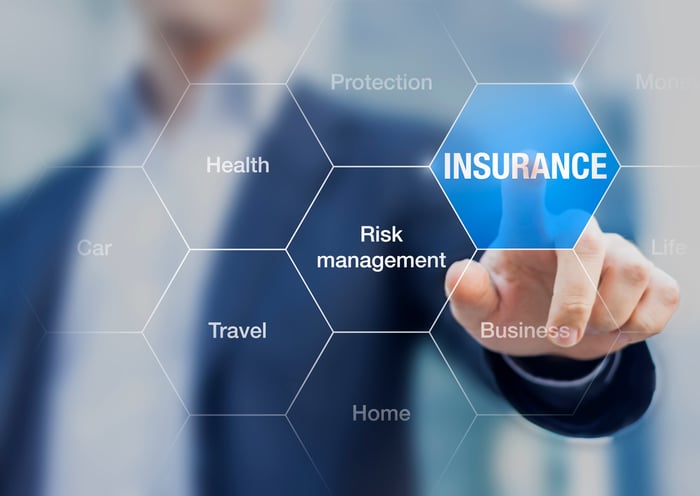 As I write this, MetLife is trading for just 9.7 times consensus estimates for its 2017 earnings, making it a cheap stock, even after the post-election rally.

Speaking of the election, While MetLife has already been a beneficiary of the Trump rally, there could still be much more room to climb if the new administration follows through with its promises and achieves its objectives. For instance, job and wage growth could translate into more group life insurance sales. Rising interest rates, which are widely expected over the next few years, would translate into higher investment income. And, de-regulation of the insurance industry should save MetLife lots of money in compliance expense and make it generally easier for the company to do business.

In a nutshell, MetLife can be a great way to get into a cheap stock that could have some very strong years ahead of it.

A diverse investment portfolio all in one stock

While it's technically not a pure insurance stock, that's exactly why I suggest Berkshire Hathaway (NYSE:BRK.A) (NYSE:BRK.B) for investors who want a piece of the insurance business.

On the insurance front, Berkshire has several subsidiaries, including the massive GEICO as well as General Re, Berkshire Hathaway Reinsurance Group, Berkshire Hathaway Primary Group, and several others. CEO Warren Buffett refers to the property-casualty insurance business as "the engine that has propelled our expansion since 1967." And, Berkshire's insurance managers are good at what they do. Unlike many insurers, which rely solely on their investments for profits, Berkshire has run an underwriting profit for the past 13 years in a row. And, the same benefits MetLife could enjoy over the next few years also apply to Berkshire's insurance businesses.

What makes Berkshire unique is that it uses its insurance proceeds to invest in a variety of other businesses and investments. As of this writing, Berkshire has about 60 fully owned subsidiaries (including its insurance companies) that include such household names as Fruit of the Loom, Duracell, Pampered Chef, and many others. And, Berkshire has a massive and diverse stock portfolio that includes large stakes in Wells Fargo, Coca-Cola, IBM, and American Express.

The bottom line is that Berkshire gives you exposure to GEICO's fantastic insurance operation as well as a well-rounded investment portfolio all in a single stock. I've written before that if I could only own one stock, Berkshire Hathaway would be it, and I continue to feel that way.

This insurer looks a lot like an early Berkshire...

Markel (NYSE:MKL) has been referred to as a mini-Berkshire many times, and for good reason. The company uses the same general business model as Warren Buffett does at Berkshire, using the cash from its insurance businesses to buy stocks and entire companies.

However, Markel is a small fraction of Berkshire's size and still relies more heavily on its insurance businesses. The company's revenue over the past 12 months was $5.6 billion, and only about $1 billion of that amount came from Markel Ventures, the part of the business that holds Markel's non-insurance subsidiaries.

As far as investments go, much of the company's cash pool is invested in bonds, as is the case with all insurance companies. However, the company also invests in a well-rounded portfolio of common stocks, including names such as Facebook, Alphabet (Google), Disney, and even Berkshire Hathaway.

Markel could be an opportunity to get in on a Berkshire-like business model while it's still in the early innings of growth.